Lots of things to pass on.

I save POI and POV (points of interest and view) in a gmail note until it is time to set it free. A personal journal of sorts. Freedom Wednesday, I always don’t say!

Here is an excellent essay regarding the loss of liberty we are all experiencing:

I am Canadian (not by choice).

It gets cold here for 6 months of the year. Those of you in Alberta or Saskatchewan may have different data – like 7 months! Incandescent light bulbs supply light AND heat. Good stuff. Can you believe we send people to Ottawa to make critical real life decisions about what kind of light bulb might be “allowed”? Give yer head a shake. Fire them all.

I’m glad to see the Harper version of conservatism is growing a pair (or two). International CF’s (that would be cluster f**ks for the uninformed) based on who has the most starving fly covered wretches is NOT the way forward. The fact of “climate change” is a fact whether or not there is one human being in existence. Or……. is the fossil record and all the signs in geology that our modern forensics reveal totally irrelevant? Skating on the Thames and grapes in Greenland are part of our recorded history which is but a minute fraction of time. There was an origin, and there will be an end. The earth is a consumable. This planet did not exist, it does, and it will not in the distant future. Tough noogies. It is all about perspective, context, and relativity. Look at this example:

The human ability to be creative and find humor everyhow wherewhy astounds and delights me. Here is a fine example –

No bacon indeed. Another food oriented crack. If you don’t laugh ’til you cry looking at the man in this picture, you might be dead –

There really are no words to describe Chinese industry……. or honesty…….

Enough already! You can only take so much…… Where are the tissues?

However, as with every event cycle, there is the specter of unintended consequences (the welfare system comes to mind as an example).

Apparently, (can you believe?) some women experience unwanted sexual attention during the festive season. What to do? The answer is in this article:

Ladies, take heed. Ignore the trans-species behavioral inferences based on fish. You are not being compared to Trinidadian guppies. Although, if you are, that’s a cool fish to be compared with. Following the suggested behavior will definitely make the parties more interesting for us lowly males.

The concept has merit, but does remind one of an Escher print, da? If every woman hangs out with “sexier friends”, where does it end? Must have something to do with comparative values…..

Those pesky pheromones ruin everything.

Here’s a terrific political ad for Ron Paul. As with every presidential cycle, he has virtually no chance of becoming the GOP candidate. Nevertheless, this ad is awesome! Take a boo:

Let’s talk Ontario / Canadian politics in reference to the “Indian Industry” that has been rotting the lives of our “first nations” (WTF does that mean?) citizens. And everyone in contact with it….. and them.

Caledonia is a travesty of everything – law, justice, rights, common sense, respect, the concept of property ownership…… ad your bitch here. There is one exception – it seems to be politics as usual. Read and watch here:

Canadians are outraged. $20 million in hush money? How did this happen? In contradiction to a supreme court injunction? It begs the question: is political sleaze worse than lawyer sleaze and teacher sleaze? They should all sleaze off…..

Once again for the lip readers – the smallest minority is the individual. Special interest groups trample the rights of the individual. There is no Canada, only individuals acting in concert or conflict with other individuals. As we all know and have experienced, humans are not perfect. What to do? Bob Newhart makes it plain right here:

Just stop it. And how pray tell can this happen? The way an individual can make change is by talking out loud. Vote in elections. Vote with your $$$. Read. Think. Argue and debate your friends, family, and strangers. And for the brave….. DO!!

Politicians must somehow be held accountable for their idiocy. May this century be different. That’s a prayer right there.

I’m a fan of Pat Condell. Thought provocative always. He was off base about the Palestinian / Israeli conflict (IMHO), but seems to have come around. Halleluiah! Take a listen:

A foundation document which preaches the annihilation of another culture as a goal, that would be a worthless foundation.

Today is the day 70 years ago the Japanese Empire attacked the United States at Pearl Harbor. At the time, there were 11 so called democracies in the world. (Indeed, the structure and nature of “democracies” is changing – http://www.smh.com.au/news/opinion/brace-yourselves-as-democracy-reshapes-itself/2008/11/20/1226770639944.html?page=fullpage – for an interesting analysis).

Here is a picture of the battleship Arizona, and the memorial that was built over her that you can visit today – 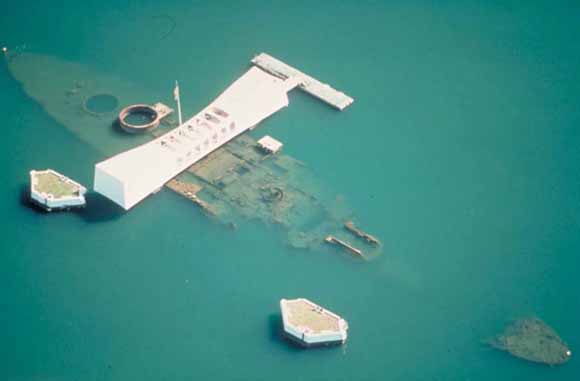 Here is a picture taken on the USS Missouri (Mighty Mo) almost 4 years later on September 2, 1945. The unconditional surrender of the Japanese –

The Missouri is now moored close to the Arizona memorial at Pearl Harbor.

Most of the men who witnessed these events are gone. There is reason to remember.

This is a picture of the “Punchbowl” National Cemetery in Honolulu. Among the first buried there were 766 casualties of the Pearl Harbor raid. The cemetery is located in the Pu’owaina crater (“punchbowl”), which was known in ancient times as “the hill of sacrifice”. The names of 28,778 American service men and women are recorded and their bodies buried here: