I thought the MiG 15 was awesome. 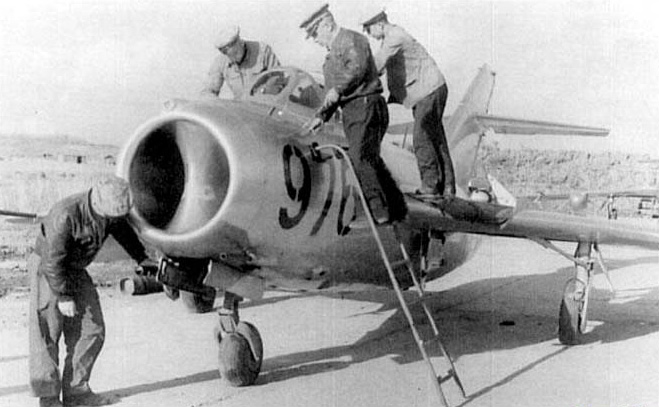 Not as awesome as the F-86 Sabre, but a worthy opponent.

Those pesky Russkies. But….. were (and are) they really folks like us? One way to tell is looking at the items found in daily life. What about Russian cars? Here’s a link to a “Russian car museum”:

As someone said in the comments, “looks more like a junkyard”. Great badging and imitation of American cars….. Big fins, lots of chrome. Great to see in Cyrillic. Me heap big Russian car lover!

Some preamble before I break out in politics like a hot dog with small pox. The way language is constantly abused and misused (especially the use of hot topic words) is legion. Example –

I am reluctant to identify myself with any capitalized, upper case political party. For most it is an exercise in futility to talk politics. For me, it is an opportunity to see if the “shadows on the cave wall” of your mind are substantial. How does a person identify their political view without invoking so many over-used, beat up and hacked words or phrases?

I don’t have an answer. I do have a website that helps you identify your position on the issues of the day, and plots you on a coordinate system with historic figures acting as a talisman. Go here and answer the questions (6 pages):

I have done these types of questions / values / positions surveys before. I am usually plotted in the “Libertarian” quadrant. This one is no different. Here’s where I plotted –

That red dot is me! Get your own red dot at the web link above.

What surprised me about the result is the following –

I’m also reading C.S. Lewis, Adam Carolla, Dr. Laura Schlessinger, and others for various reasons. Look at the Friedman plot above, and where my plot is – very similar. Milton Friedman is a disciple of F.A. Hayek, and Thomas Sowell is a disciple of both Hayek and Friedman. (On another note, if you want the U.S. to elect a black man, let it be someone of the moral fibre of Sowell. I’d even go with Bill Cosby. Herman Cane would be a dream – Jack Dempsey vs Jess Willard – details of which are here: [youtube http://youtube.com/w/?v=X3BTycNuY44] – sanguineous fluid indeed!)

The next question to ask is…….. Drover, is your head so soft that whatever you are reading over-writes what you think?

The answer isn’t obvious, or too clear. Here are some clues and facts:

Are we finished with the “Occupy _____________” (fill in the blank)? If so, how about a rousing stanza or two of an old Beatles dirge to close the door on an embarrassing movement (too frequently bowel)-

How about this one? –

One more item to divulge. A brilliant lecture from Matt Ridley regarding Scientific Heresy. Wherein Mr. Ridley attempts to answer that age-old question “When are scientific heretics right and when are they mad? How do you tell the difference between science and pseudoscience?” He proffers 6 lessons he has learned in his quest for enlightenment. Read it all here:

Lesson number 1: the stunning gullibility of the media.
Lesson number 2: debunking is like water off a duck’s back to pseudoscience.
Lesson number 3. We can all be both. Newton was an alchemist. (both scientist and pseudo-scientist).
Lesson number 4: the heretic is sometimes right.
Lesson no 5: keep a sharp eye out for confirmation bias in yourself and others. (What sustains pseudoscience is confirmation bias. We look for and welcome the evidence that fits our pet theory; we ignore or question the evidence that contradicts it.)
Lesson 6. Never rely on the consensus of experts about the future.

A short quote from the lecture –

“Let us run through some issues, starting with the easy ones.

Astronomy is a science; astrology is a pseudoscience.

Evolution is science; creationism is pseudoscience.

Vaccination is science; the MMR scare is pseudoscience.

Oxygen is science; phlogiston was pseudoscience.

Chemistry is science; alchemy was pseudoscience.

Are you with me so far?

A few more examples. That the earl of Oxford wrote Shakespeare is pseudoscience. So are the beliefs that Elvis is still alive, Diana was killed by MI5, JFK was killed by the CIA, 911 was an inside job. So are ghosts, UFOs, telepathy, the Loch Ness monster and pretty well everything to do with the paranormal. Sorry to say that on Halloween, but that’s my opinion.

Three more controversial ones. In my view, most of what Freud said was pseudoscience.

So is quite a lot, though not all, of the argument for organic farming.

So, in a sense by definition, is religious faith. It explicitly claims that there are truths that can be found by other means than observation and experiment.”

Now for some applied science – observing the natural world around you, and describing it. Some preamble:

A treasure trove of pictures is hidden in the buckets, bins, boxes, drawers, and containers scattered about the Churchill estate on the edge of Kalamalka Lake, in the buildings and vehicles inhabited or owned by the inestimable Charles Richard Davidson, Esq. CR responded to my request for pictures of Karen, and produced not only old hard copy (photographs) of her, but of many others.

Now, to the scientific pursuit. Here is one of the photographs I scanned to share with all y’all. Take a peek into the past –

Tell me, who are the three entities in the shade? That be Ronaldo of Dulmadge by the tent, and Jimmy Brandon with his back to the camera. Those in the shadows? Not a clue. My senses tell me that the person in the middle is a female (something to do with the way clothing lays), and that pith helmut-like topped fellow might just be our very own Gridney of Mountain View. Who is coming out of the tent behind Ronaldo? Somebody help me out here…… Is this Gull Lake? End of grade 12? Jesus and Mary, there are a lot of beer containers present. And who are those folks way in the background near the beige colored tent? Is this where my brain cells took a major hit in the war on consciousness? I have no frikkin’ idea……

Another picture I found quite interesting. Me being a mystic (pseudo-science), trying to peer into the fucha. The sepia color helps the illusion doncha think? –

The faux look of glaucoma / cataracts is a ruse in this image. I was merely trying to transport my better parts beyond the veil….. Nice nose holes! Alas, halo iconographic subject matter I’m not. See here, my dear fellow!:

Senior Ricky has many more pictures, and promises to bring them to me for scanning. Jimmy B, I’ve got a bunch to send to you. When I’ve got a substantial collection, I’ll send it along to all.

Here is some commentary from Steve Sailer remarking on Richard Lynn’s newest book, “The Chosen People: A Study of Jewish Intelligence and Achievement”:

Sailer concludes that about the only field Jews aren’t noteworthy in is golf course design…… which begs the question, Cam. Why Scotland?

If you like to search for music why not try GrooveShark? Here’s where to go:

Simply type in any title / artist / group and most often something pops up…..

Lastly, the experiment called Schrodinger’s Cat as a YouTube video:

Lot’s more where this came from.

My bum is flat. Time to step away from the computer……