God help the North Korean people. Their flag is red, white, and blue. What a travesty –

I pray that somehow, against all odds, somewhere in that hell hole people will rise up on their hind legs and throw off the yoke of bondage they suffer.

That prospect seems so remote that it WILL take God to intervene. Or, an influx of Marines (like that could happen). Or maybe Chuck Norris. So, just this one time, God, please do it. In a troubled, unsettled world of humanity, do it good. Once again, The Who to the musical philosophical rescue:

Can humans really be such hive entities as to never question their “superiors”? Can they want to serve the “greater good” so strongly that they destroy any good there might be?

Alas, from a lifetime of observation and in my darkest thoughts, it seems entirely possible to program the cognitive protoplasm just so. Otherwise, could there be such sorry examples of human abuse?

The specter of people wailing and weeping over the demise of a man who is solely responsible for their misery is beyond my ken. As the Internet so succinctly states, WTF??

Is it possible that they fear what comes next more than the horror they had? This new kid doesn’t look too promising….. 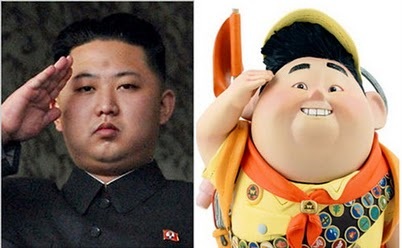 Or, could they have been raised like lab rats in a closed environment, and fed propaganda endlessly? My suspicion is those close to the regime are happy at the government teat. Your choice? Before you do, sample any one (or all) of the clips below……

A few YouTube clips about the glory of North Korea:

How about a vacation in Yodak? Sounds quite pleasant. I would like to loose a few pounds, and the prospect of working in a gold mine is so exciting! Only a handful have ever left to tell about it? Is this “Hotel California” or what????

I couldn’t find parts 4 and 5, but there are many documentaries available on YouTube of the glorious DPNK. Democratic People’s of North Korea my hairy white aging ass…..

What could the use of the United Nations be, if not to expose this kind of evil to the light of day? Aaaaaaaaaarrrrrgh! Tits on a windmill.

In counterpoise, in a state not far away, a more sane environment. This is a refreshing article, several years old by now. Would you ever see an article like this in North Korea? Or in Canada? I can hope –

There are some things worth believing, even though they may not be true (ref. Second Hand Lions – [youtube http://youtube.com/w/?v=wJemDZcgIZE] ). With that concept in mind, I think like a Georgian Marine, and an Atlanta Georgia cop as represented. I will offer no speculation on the ethnic background of Mr. Tyrone Jackson, but the ethical foundation presented as typical of the Marines and the Atlanta police presence is outstanding.

Off the beat, our Mr. Tyrone Jackson is very lucky. These Marines must have been off duty, or assumed Mr. Tyronne Jackson to be a minimal threat even while armed with a knife. It is ILLEGAL for a Marine to be unarmed while on duty. That means firearms and live ammunition. Count your lucky stars, Tyrone. By the way, Tyrone’s real name was Tracey Attaway (apparently not “ethnic” enough to carry the story).

Too bad the last paragraph of the article is bogus. This article has been doctored (see Snopes – http://www.snopes.com/politics/military/stabbedmarine.asp ). Many people read this and find some redeeming value – they would like to believe it is true. Me too. Unfortunately, in our litigious world, the Marine Corps would have been sued by “Tyrone” and his band of merry lawyers until the Congress would have to pass a Defense Funding Bill.

The smallest minority is the individual.

Western law and culture is based on rights of the individual. Although there are examples of this philosophy being skewed or misaligned (Roe vs Wade comes to mind), it is the most noble of foundations for a lawful society.

Question: Anyone have a North Korean acquaintance? Does anyone you know come from there, or know anyone who comes from there? Any stories about successful defection? Or legal emigration?

If you pray (and I know all y’all do), put in a good word for those unfortunate people who were born in such a repressive environment. They will be a welcome addition to the family of free peoples should they ever gain a modicum of freedom.

You might also pray for the preservation of our culture. It is under extremely aggressive influences to become even more totalitarian.

Now if all the wack-jobs in the middle east running theocracies / oligarchies / tribalism states / fascist states et cetera (a list of types of governments here – http://en.wikipedia.org/wiki/Government#Types_of_governments ) were to drop dead en-mass wouldn’t that be a sign of divine intervention…… May as well throw Cuba, Venezuela, etc. into the mix.

Joe (Ever Hopeful) Mekanic
p.s. MERRY CHRISTMAS TO ALL!
p.p.s. Ramirez would be an awesome President –