Joe’s Comment:  This time of year is special to older folks living in the Judeo-Christian nations of the West.  As children, we adopted the seasonal family traditions with wide-eyed uncritical belief; accepted as the way things were.  Where to get (Christmas tree “hunting”) and when to put up the tree.  Whether to open one (or more) presents on Christmas Eve.  How many and what kind of lights (or not) to put outside.  Angel or star on the tree?  Butter tarts, short bread, Christmas cake (with rum!), the dreaded candy canes…..  And the music.  The Christmas concerts.  Shopping.  Hoping for snow…..  Hanging a stocking for Santa to fill.  Tons of family and friends.  Christmas dinner.
It doesn’t seem quite the same in our multicultural diverse modern world.
What could have changed?
At our house this Christmas, we have a 5 year old catalyst (young Mr. Rourke) roaring around, questioning and adding his perspective to the traditions he doesn’t yet know by heart.  Kenda and Rourke decorated the tree December 9th.  We have almost three weeks of suspense building up to Christmas morning!
That is what changed – I got old…..
The season is extra special with children.  I feel privileged.  I feel Christmas again. Last week’s rant the concept of “cognitive dissonance” was introduced to explain the reaction of some who could not accept reality a la carte.  Simply put, the person who insists their “weltanschauung” is true despite the evidence at hand, is suffering cognitive dissonance.  People live with cognitive dissonance – it is one of those endearing abilities of the human mind.  The Yogi Berra moment (when you come to a fork in the road, take it!) is the realization that your world view is incorrect.  This can lead to a moment of “anagnorisis” – awareness of the truth / reality.  What happens next is a choice to re-affirm cognitive dissonance (as this Dilbert cartoon demonstrates)-

– or to recognize the dissonance, acknowledge and accept the “peripeteia” moment, and change.  There is a cost to living with cognitive dissonance, consciously or unconsciously.  It is manifested as a reaction to stress –

Here is a statement to Christopher Hitchens (RIP) from Ayaan Hirsi Ali, acknowledging that she cannot be a “Muslim liberal” without a framework of cognitive dissonance in her mind to support such a world view – Joe and I are fascinated by the cognitive dissonance exhibited by the Hillary / Democrat supporters post election.  Shades of the “Maginot Line” France constructed between WWI and WWII to keep the big bad Huns from invading.  When the time came, the German forces went around the end of the Maginot Line and kicked the stuffing out of the French defenders.
So too did the Democrat supporters erect bulwarks and prepare defensive arguments to “combat” the evil Dirt People’s reaction to losing.
The Dirt People didn’t lose – an outcome deemed impossible by the Left, and they had no plan for that eventuality.  The impossible happened.  Who to blame?
The Left came to pieces.  They continue to come to pieces to this day….. and why not?

There is a short Bob Newhart skit from a long ago MadTV episode.  Joe and I have used it for years in workshops, in presentations, in courses, in this rant, and one-on-one, to help people realize the only thing holding them back, the giant inertia opposing their success, the enormous ball and chain of “if only…”, is the cage they build in their head.  Quantum physics and multi-verse theories not withstanding, there is a reality.
Accept what it is.  Plan from thence.
As Ms. Morrison (grade 10 – 12 math teacher) said, “identifying the problem is 95% of the solution”:

Comic Relief
Joe and I do not suffer cold / Winter weather too easily.
It isn’t the cold so much as the indignity of having to dress warmly.
Surely a country where you can fall asleep outside naked and freeze to death needs remedial heating.
When the weather gets Joe down, humour restores balance.
Here is Canadian comic Norm Macdonald with some oldies but goodies.
Norm Macdonald for Prime Minister!:

The “Norm Macdonald Weekend Update” has full episodes of Norm at his SNL greatness.

Regulation for the Nation
The amount of $$$ the government siphons away from people who drive or own a vehicle is staggering.  Who knows what the Canadian numbers are?  Me no know, but the great country just south of we Canuckery keeps tabs on everything.  Would we be so much different?  Joe says not likely; we’d be worse.  FYI:

Judge Jeanine
The judge lets loose on Obambi re: why investigate now?
Everyone knows the answer – because the “wrong” team lost.
Joe loves this woman. Me too…..

Blasts From Our Pasts
A good friend insists that references to the past, especially when used to exemplify negative behaviour, must be considered “in situ”, that is, by the mores and realities of the time.
Joe and I agree.
Attitudes and platitudes of the past from well known (often celebrated) intellectuals / politicians / artists whose opinions as expressed are wildly at odds to the “group speak” and politically correct mandates of today.  From the website ThoseWhoCanSee, an article titled “The Past Is a Real-Talking Country” gives examples –
James Watson:”[I’m] inherently gloomy about the prospect of Africa’ because ‘all our social policies are based on the fact that their intelligence is the same as ours – whereas all the testing says not really.”
Abraham Lincoln:”You and we are different races. We have between us a broader difference than exists between almost any other two races. Whether it is right or wrong I need not discuss, but this physical difference is a great disadvantage to us both, as I think your race suffer very greatly, many of them living among us, while ours suffer from your presence. …  If this is admitted, it affords a reason at least why we should be separated.”
George Bernard Shaw:”This craving for bouquets by Jews is a symptom of racial degeneration. The Jews are worse than my own people. Those Jews who still want to be the chosen race (chosen by the late Lord Balfour) can go to Palestine and stew in their own juice. The rest had better stop being Jews and start being human beings.”
The article is an interesting read.  Quote –
“So before we are too quick to jump on the John Waynes, we would do well to remember that most ‘bigotry’ of yesterday was either
(1) Simple in-group preference, which all peoples practice, or
(2) Observation of group-level differences, which in fact remain as plain as day despite our strenuous attempts to deny them. 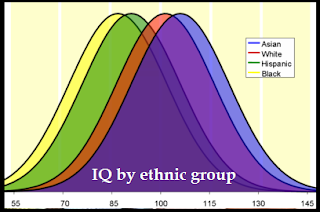 Pat Cadell
Joe and I have been watching Pat Caddell since the first term of George W. Bush.
Pat Caddell is a Democrat.  He is a Democrat in the original sense of the party of Thomas Jefferson, the “Jeffersonian Republicans”.  A party of “the People”, not the aristocracy.  Pat has NOT been following the Democrat Party Line®, and is NOT an Obambi or Hillarious fan.  The following speech made at Hillsdale College in October (before the election).  Refreshing and informative talk.  He truly is an American, protecting the idea of citizen government – come to Washington, govern, then leave, go home, skedaddle, adios!  I suggest this is pertinent watching.   Pat Caddell with his vision of “The Democratic Party Today”: How do you bring productivity and economic success to depressed failing communities?  Is there a magic formula?
Joe Max Higgins Jr. says there are two motivational philosophies he follows: 1.  live every day like your ass is on fire, and , 2. don’t take any plays off.  That means “full tilt full time”.
Turning a “losing” community or area or county into an example of economic success is not a magic spell or secret potion.  It is hard work with a big team and sufficient financing to be the best no matter what the competitive arena is or the quality of the competitors you face.  There is a “60 Minutes” documentary that records the successes of Joe Max in the Mississippi “Golden Triangle” and more information at this link and this link about this dynamic economic developer.
Success requires all parts in place and all pieces fully functioning.  Joe Max is an advocate of education.  The future of industry in America is a high skill work force teamed with advanced robotic plants, access to raw materials, cheap energy, and short transportation routes.  The video below is an up-close exposure to Joe Max, the human dynamo.  His ass IS on fire.  He is a leader:

The weather this week has been below zero between 5 and 10 Celsius.
Today, Sunday, the snowfall total is about 6 inches.
Hot chocolate helps.
Especially with a touch of 40 Creek Copper Pot for the flavor.
Every year Joe gets surprised by the cold and snow.  The yard is full of projects waiting to be started, projects on the go, and projects being ignored.  All under snow that is getting deeper every hour.
To Hell with it!  They’ll all be there in the Spring.
Only 9 more days until Winter starts….

Joe (Snowy) Mekanic
p.s.  Ramirez gems are precious.  He must be on holiday this week……