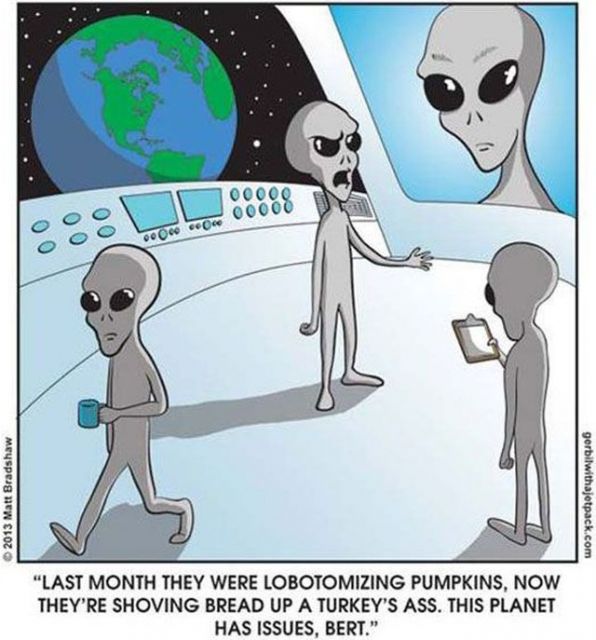 Blue Collar Logic
Joe and I think along the lines of Dave Morrison, who observes in the video below that the health, wealth, and prosperity of all humanity (in general) has never been better.
Despite this FACT, many folks are bleating loudly about those who are “less fortunate”.  Joe and I don’t argue this FACT either.  However, less fortune is certainly a relative metric with many dimensions.
For example, Joe insists he’d rather drive an old junky Ford truck (oh wait, what’s this? – he does! (thanks to Mark Dice for the meme))  than the most expensive Mercedes.  Would this mean that Joe is “less fortunate” even though he feels nothing of the sort?  And if Joe is “less fortunate” is it not a matter of translation of value systems?
Ingratitude is a conceit that only the truly wealthy (especially the uber deluded) can indulge to a self-promoting maximum.
The squeaky wheel SHOULD get greased.
The squeaky adult not so much.
“No one is free until everyone is free” is a feel good statement attributed to many, many, well meaning modern “liberals”.  As with many feel good statements, it is so vacuous as to suck your breath away when analyzed.
Perhaps it serves some ideological function or moral yearning?
Joe says for more analysis refer to Alexander Solzhenitsyn, or Søren Aabye Kierkegaard, or Franz Kafka, or George Orwell, or Anne Frank, or for some humor to lighten the heavy burden of understanding, Joseph Heller (Catch-22).
Your analysis may differ.
I’ll add to Joe’s blathering thus: that “fortune” along with other relative (yet separate and distinct) terms such as “liberty” and “freedom” and “free speech” has few objective attributes that all people would agree to embrace.  Hence the application of the “Platinum Rule” (do unto others what they would have you do unto them”) is on some occasions, necessarily more appropriate than the “Golden Rule” (do unto others what you would have them do unto you”); i.e. more granular, more specific, more exact.  And more rewarding, more satisfactory for all.
Murky waters indeed.
Here is Mr. Morrison to un-murk the H2O (or is it HOH?, or H-OH?):

Mark Dice
Joe and I love this guy.
Sharper than a tack, focused like a laser, funnier than Rodney Dangerfield (this might be argued).
Mr. Dice observes that the progressives / leftists can’t take a single moment to be thankful because of their mind-numbing obsession to be the dictator of the world.  Before breakfast, even.
Joe says nothing irritates a lefty more than a happy conservative with an excellent sense of humor:

PragerU
The topic of this mini-lecture from PragerU is “Framing”.
Framing is an irritant to Joe and me when employed by “journalists”.
Not so much when employed by “pundits” or “teachers” or technicians.
For clarity to make our point we watch as much political scrimmaging as we can stomach.
Joe and I have found that our tolerance does NOT increase with exposure, especially exposure to political machinations as presented by the “main stream media” in the good ol’ U.S. of A. or here in the frozen north strong and fee (simple).
Our favorite meme about the entire shemozzle is direct and to the point – 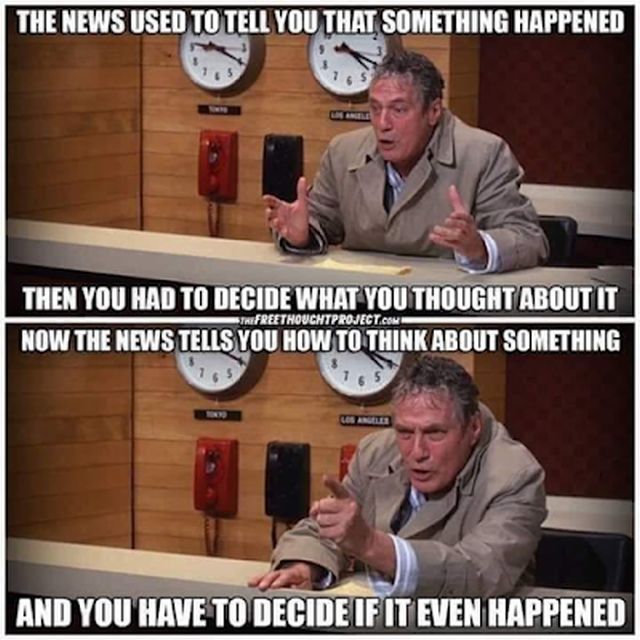 When the “News” tells you what to think about something, that is “framing”.
Presenting ideas or facts or details or events or whatever in a “framed” manner means they (ideas, facts, details, events, etc.) are cloaked by an identity perspective or selected and/or isolated to support an ideology or cause or viewpoint meant to eliminate discussion or argument or analysis.
Joe says “framing” isn’t necessarily bad.  For instance, when you first learn trigonometry the geometric frame (triangle, circle, cone) is essential to understanding and teaching.
Joe also says “framing” can be incredibly bad.  Try watching CNN for one measly hour (if you can) for a primer.  That is, a primer on “how to” really piss people off.
Jeff Myers, President of Summit Ministries, explains the concept of framing and what to do when you recognize that a “framed” jumble of information is broadcast your way.  Here is Mr. Myers with “The Dark Art of Framing”:

Eco-Update
Joe and I have plenty of heroes (and heroines too).
One of the intellectual giants we admire is William Happer.
This is a follow-up interview of Dr. Happer by Stewart McNish (Conversations That Matter).

We posted the first interview some time ago.  Here it is again:

The Mark Steyn Show recently (November 2019) hosted a forum of very astute and (in our mind) famous “climate deniers”.  At Glacier Bay.  This should be mandatory viewing.
The panel is Mr. Steyn, Anthony Watts of WattsUpWithThat.com, and the two guys who dismantled the fraudulent “hockey stick” graph, Stephen McIntyre and Ross McKitrick.
Three Canadians and a Yankee.
The progressive weenies employ criminal means to attain their global objectives.
Thank doG there are men like these (and hundreds more) who know better and are not afraid to say so:

Another down to earth assessment (one that we’ll show to our grandchildren) was a tip from David M. and found at the NaturalNews.com website (not on YoubeTube):

An excellent video that repeats the message a goodly number of times to penetrate the thickest fog of inattention often found around children.  Or those souls so focused on themselves that the external “real” world is a black and white snapshot alongside their internal Technicolor® CinemaScope™ Vitaphone© fantasy.

Racing Legend Carroll Shelby
This is an incredible interview from 1997.  Age 74.
Gulp!
Joe and I are 70…..
The Carroll Shelby story told by his own self:

The History Guy
Joe and I have watched many of the History Guy’s short histories of important times, people, things, and events.  The History Guy YoubeTube channel has over 360 interesting vignettes.
The following video about the Avro Arrow reminds Joe and I of how much Canada could be if certain things were different: 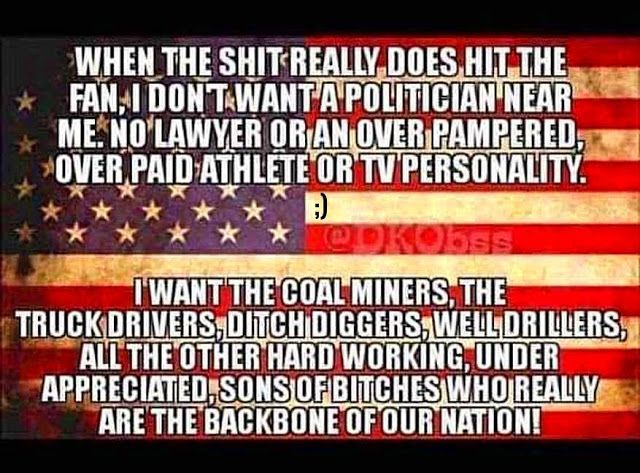 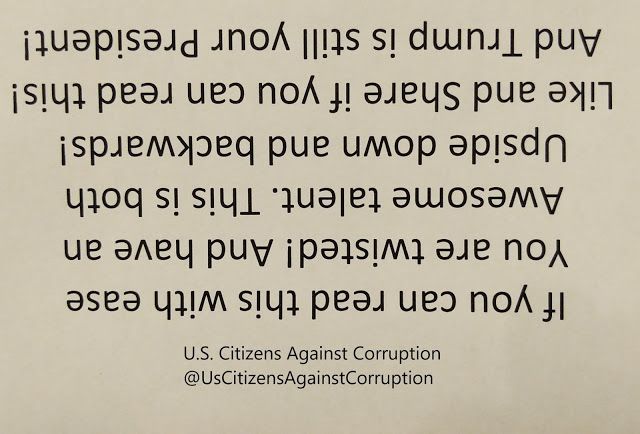 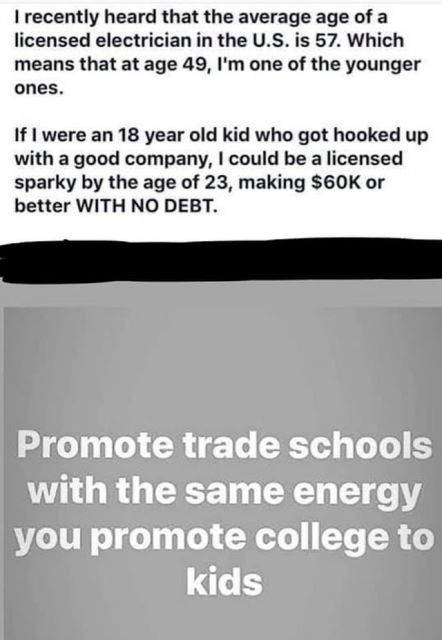 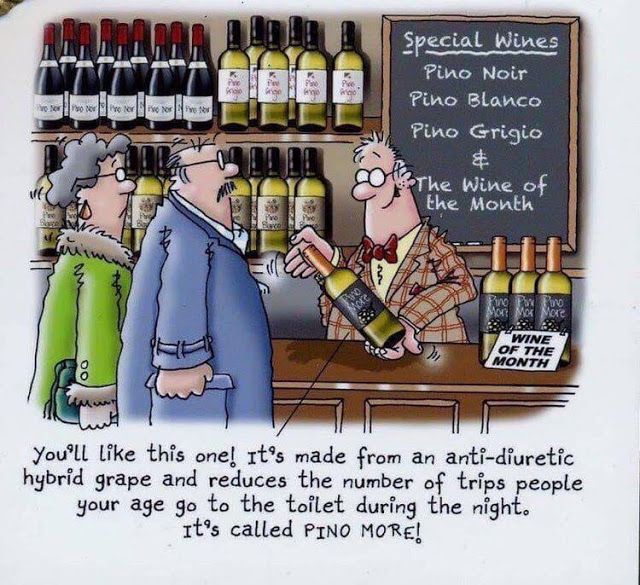 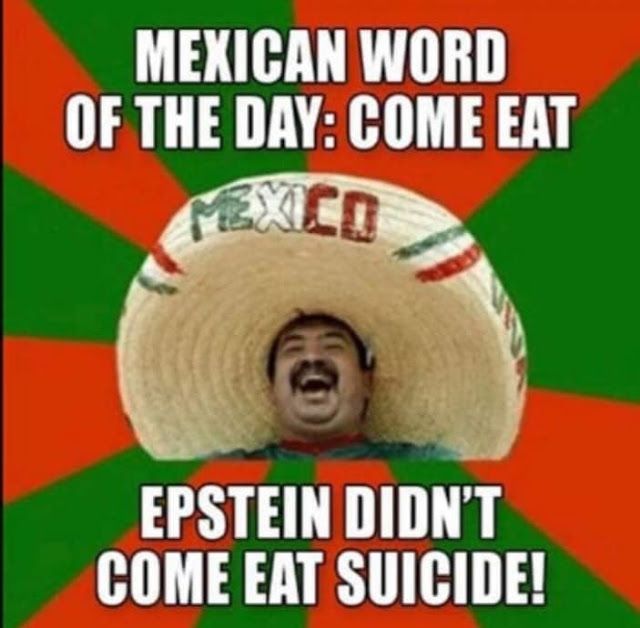 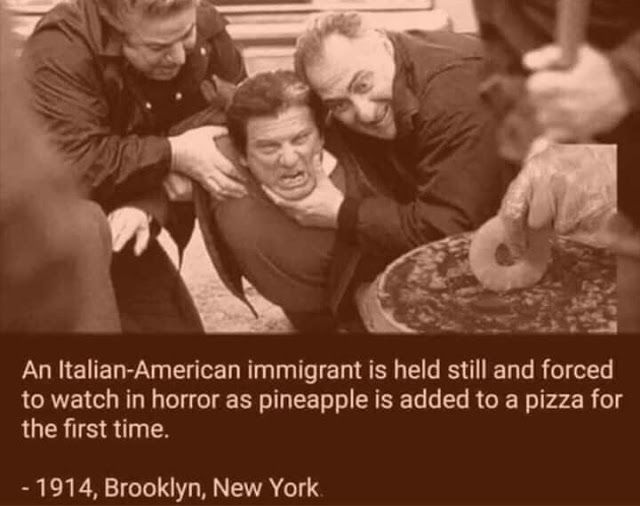 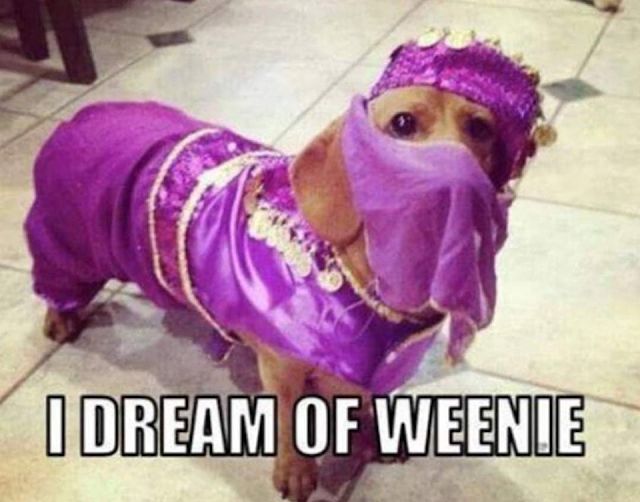 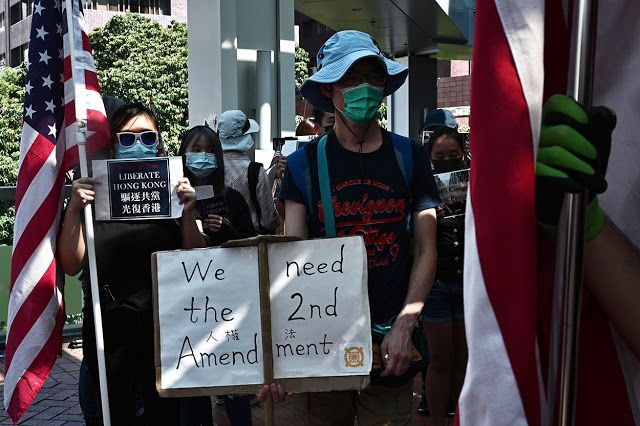 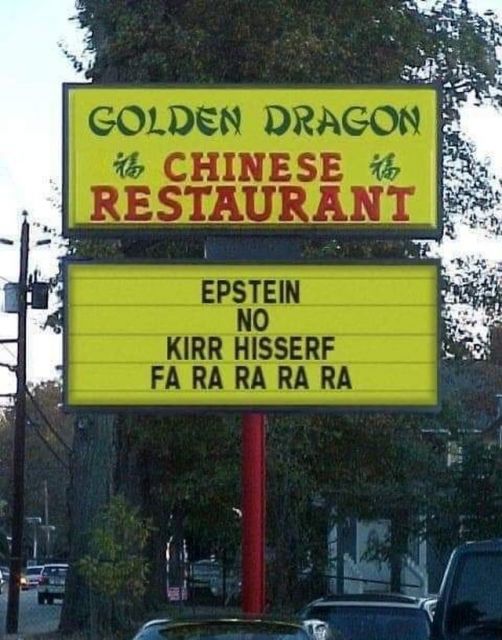 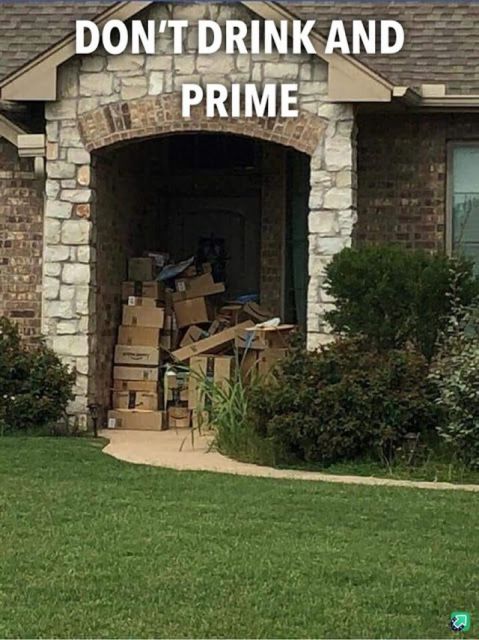 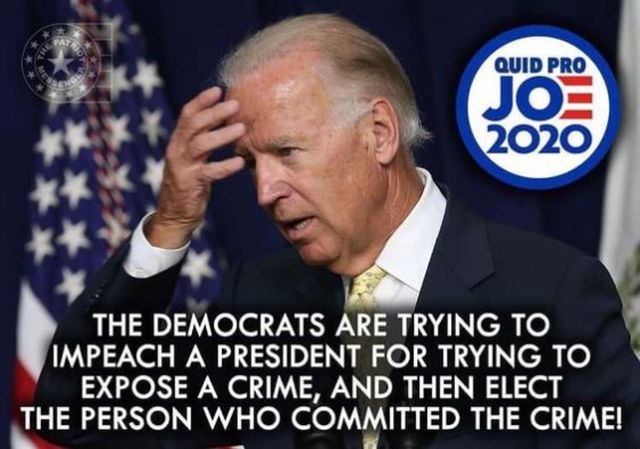 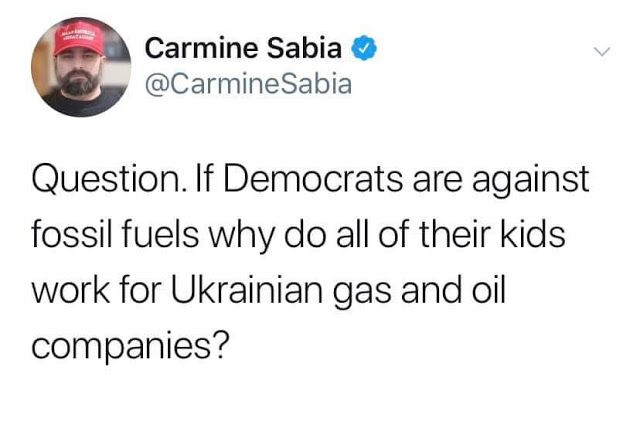 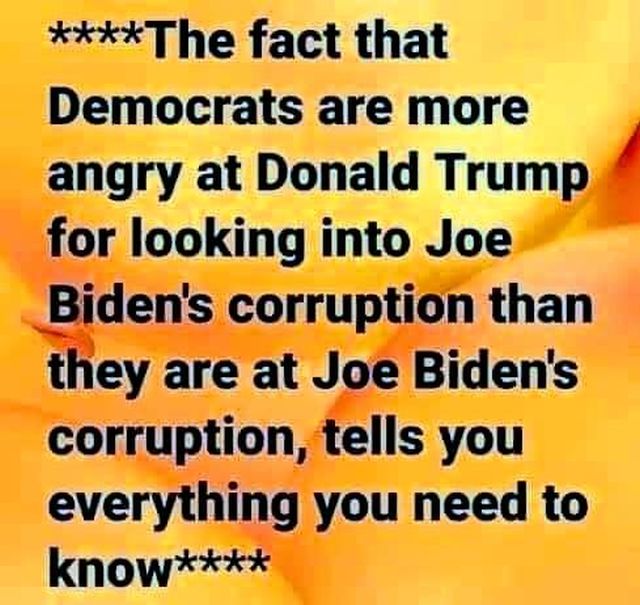 Joe and I have been guilty of placing women on a pedestal.
We continue to struggle with the FACT that women are just and only and uniquely the other gender of the human species.
From whence came this urge, this desire, this programming to rush to the defense of a woman at the first sign of impropriety or wrongdoing or abuse?
Is it possible the woman could be the source of the wrong doing?
We (Joe and I) are guilty of grouping women with children (generally) in the sense of physical strength.  In that regard we are both realist and misogynist (in the sense of prejudice).  Any contrary example is a rare exception, not a generality.
One of our heroines (female heroes?) is Janice Fiamengo.
Professor Fiamengo has been helping Joe and I come to grips (if not understand) the effect and affect “feminism” has had on us (Joe and I) as male, and on the culture in general.
In this Studio Brulé video she identifies and defines “The Women Are Wonderful Effect”.
Joe and I watched it three times.  We will watch again:

Joe and I argued together (and with the other 35 lost souls in our cranium) about posting this Stefan Molyneux presentation as the sermon o’ the week.
We found these observations to be fact based.
We know women (as much as we can….) that meet the criteria of old(er) without family.
We agree with much of his analysis.
And we are thankful to have heard these ideas, these perspectives, these missives.
Here is Stefan Molyneux at the 21 Convention in Orlando Florida (November 2019) presenting “What Men MOST Want to Say to Women!”:

This week in Vernon BC has been clear and cloudy and chilly and cold.
Quite a mulligatawny.
No rain.
No snow.
Very frosty mornings – that scritching sound in the early morning is a Canadian version of a locus chirp, a cricket-ty noise made by hard plastic scrapers rubbing on icy windshields.
Looking across the rooftops in town a visible indication of chilly are the ghostly clouds etched on the sky by the condensate forming above a chimney in almost every home.    Sounds Tiny Tim-ish….
Finally, on Sunday, it warmed enough to snow!
A brief summary of here and now is days are still getting shorter.
Official Winter is just over three weeks away.
Woe is Joe.
April countdown coming up. 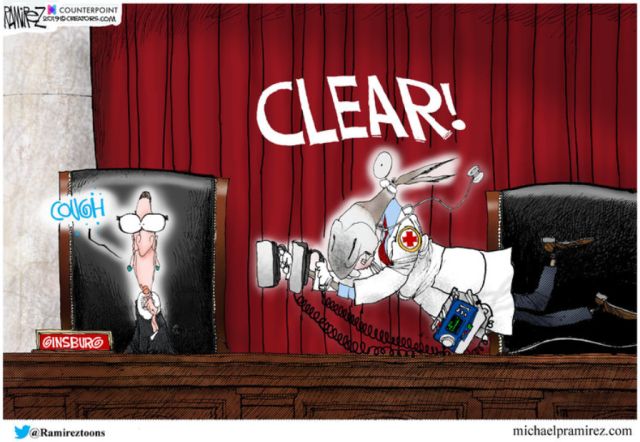 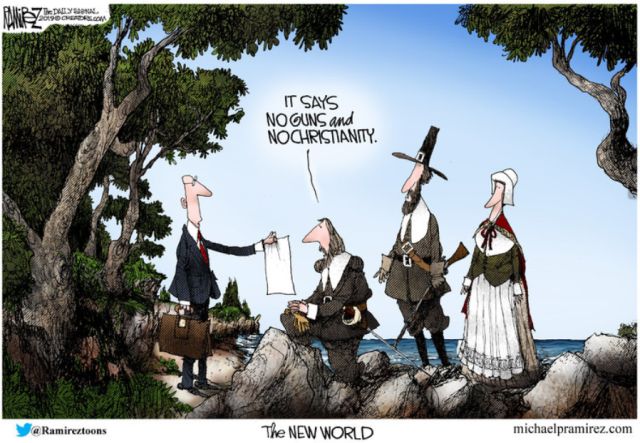 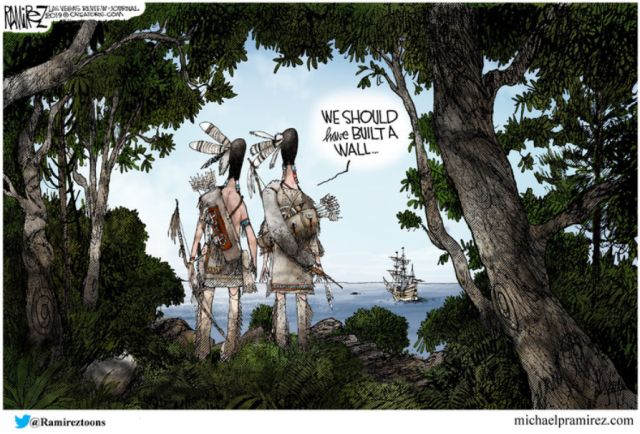 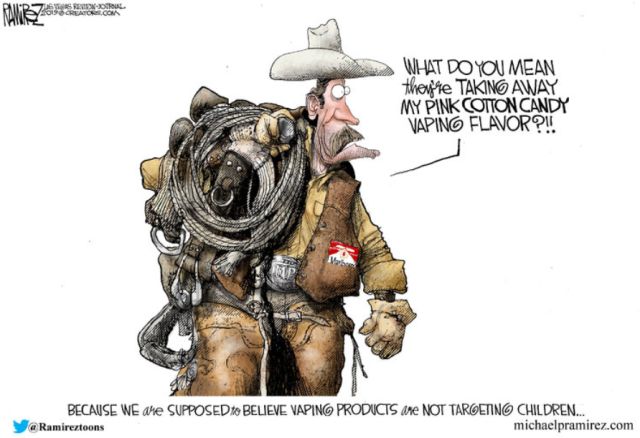