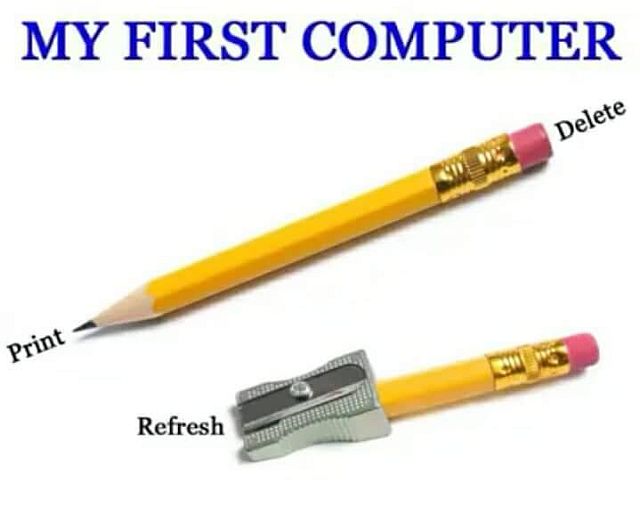 Joe’s Comment – I’m not complaining.  In fact I’m astounded at the progress I’ve witnessed in my short life.  Let’s talk computers.
The modern personal computer is an amazingly powerful and versatile machine.  It is a tool, it is a teacher, it is an endless source of amusement.  When connected to the Internet, it is a cultural axe wielded by We The People, an endless and real time source of information and communication.
My early education was the era of log tables and slide rules.
In those days, you were required to understand the basic underlying theory in order to use the tools, for the tools were primitive.
I can actually do basic math, calculate square roots, areas, volumes, sketch a plan or picture, and write whatever tickles my fancy with this early and most humble tool called pencil.
I meet people who cannot that are much younger yet equally capable to learn.
Something about foundational requirements is missing….
The age of R2D2 is upon us: a personal assistant to substitute for and to aid John Q. Public with the ever growing unknown and incomprehensible knowledge warehouse that is modern life.
Next step forward?
Real time artificial intelligence assistant at an affordable cost for the hoi polloi.
If you don’t approve of the technological intrusion into what was once social intercourse, wait a decade or two….

Being White and Male
Joe is a white male, Alpha class. 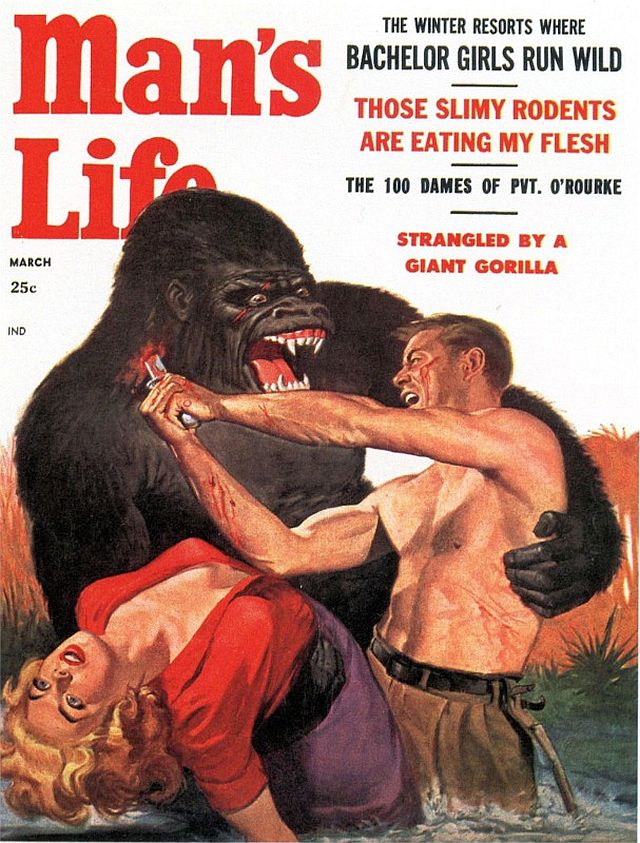 He’s not so sure about me, but grudgingly admits I’m white and male. 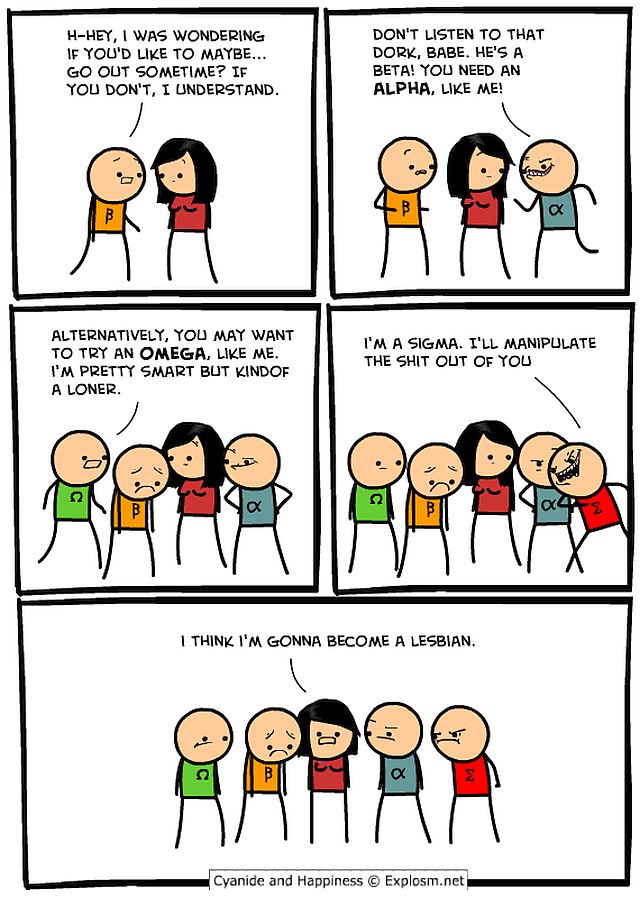 We are in agreement: we are not “proud” or “privileged” or “racist” in our whiteness; we just are white.
Not to say we downplay or glory in the accomplishments of the Judeo-Christian Western cultural achievements of the last 5 centuries.  They just are accomplishments.
Joe is quite irritable about TV advertisements.
If there is such a thing as an agency which “ensures truth in advertising”, Joe figures it must be an enclave of untold numbers of lawyerly lawyers, the semantic jousters of modern Western litigation.  Joe says marketing “executives” have replaced lawyers in his mind as the most despicable “people” walking on the legal side of the law.
I for the most part, agree with Joe: if all the marketing types and lawyering types suddenly disappeared, who would miss them (for their occupational prowess)?
Misandry is defined as hatred of males.
Perlocutionary as an adjective is defined as (of a speech act) producing an effect upon the listener, as in persuading, frightening, amusing, or causing the listener to act.
Perlocution as a noun is defined as the effect that someone has by uttering certain words, such as frightening someone.
Illocutionary as an adjective is defined as pertaining to a linguistic act performed by a speaker in producing an utterance, as suggesting, warning, promising, or requesting.
Illocution as a noun is defined as an act performed by a speaker by virtue of uttering certain words, as for example the acts of promising or of threatening.
The following YouTube video produced by “The Ignored Gender” has plenty of examples of all of the above.
Joe and I don’t subscribe to all of the video maker’s conclusions, but we have been aware of the quasi-misandry (and quasi-misogyny) in marketing for all our conscious life.
Our conclusion?
Q.  What do you call a sunken ocean liner filled with marketing executives and lawyers?
A.  A good start.
So sue us you useless assholes…..

Modern Heroine
Joe and I have nothing but praise, admiration, respect, and support for Pamela Geller.
Joe has a strong libidinal attraction for her.
If you remember, Ms. Geller held a “draw Mohammed” event, May 3rd, 2015, in Garland, Texas.  Her event was stormed by a pair of Islamic thugs.  The ending was atypical – Pamela had a SWAT team and her personal body guards at high alert.  The terrorists were eliminated.
Can you imagine anyone even paying attention to a “draw Jesus” or “draw Moses” event?
Her current book, “Fatwa In America” is on our must have book list.  The book has not been release yet, but we have pre-ordered it for two reasons.  First is to support this incredible woman in her crusade (that’s right, we said it) against the negative values of Islam.  Second is to learn how the progressive movement of the West confuses truth and facts with “racism” (since when is a political movement a race?), how the progressive movement restricts free speech, how the progressive movement thinks emotionally vs factually.
You can buy the book here:

Dinesh D’Souza
Once more with feeling.
Dinesh makes it clear that if a normal person is fed dis-information, the quality of their conclusions based on such information will be questionable.
The recent (and on-going) unrest in the USA regarding just who is left and who is right, who was a slave and who was a master, who has privilege and who has not, is subject to Mr. D’Souza’s well researched analysis.
Joe loves this guy.
It’s the kind of love where we keep our clothes on….
Joe and I are reading his current book, “The Big Lie – Exposing the Nazi Roots of the American Left”: 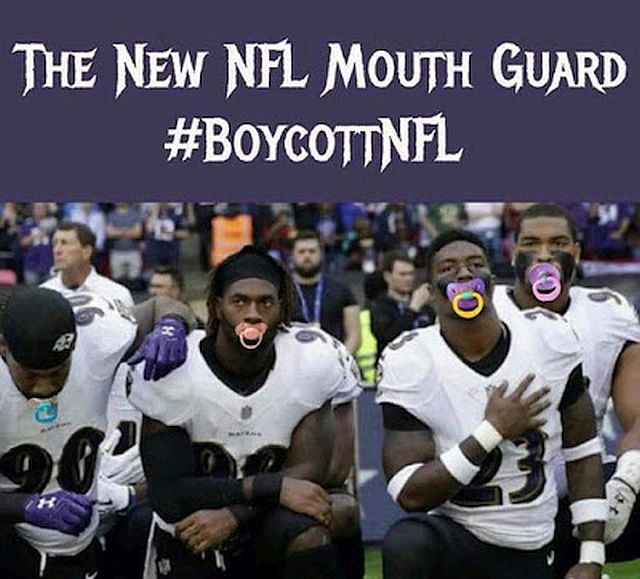 Joe and I marvel at the attempt to muffle the outrage the average American has engendered for the pampered divas who play football professionally.  In earlier rants we have posted the crime stats re: pro football players.  Joe says for anyone making an absurd amount of $$$ while risking their physical health in a very violent game, the ability to clearly articulate their political thinking may be a legitimate challenge.  Joe says these people are akin to Kamikaze pilots – propelled by emotional thinking, not dwelling on future reality.  I think the average IQ of the professional football player is below the North America average of 100.  Maybe approaching 85.  Just sayin’.  An open letter posted on the Ferral Irishman website, author unknown –

Dear NFL Player,
“You graduated high school in 2011. Your teenage years were a struggle. You grew up on the wrong side of the tracks. Your mother was the leader of the family and worked tirelessly to keep a roof over your head and food on your plate. Academics were a struggle for you and your grades were mediocre at best. The only thing that made you stand out is you weighed 225 lbs and could run 40 yards in 4.2 seconds while carrying a football. Your best friend was just like you, except he didn’t play football. Instead of going to football practice after school, he went to work at McDonalds for minimum wage.
You were recruited by all the big colleges and spent every weekend of your senior year making visits to universities where coaches and boosters tried to convince you their school was best. They laid out the red carpet for you. Your best friend worked double shifts at Mickey D’s. College was not an option for him. On the day you signed with Big State University, your best friend signed paperwork with his Army recruiter. You went to summer workouts. He went to basic training.
You spent the next four years living in the athletic dorm, eating at the training table. You spent your Saturdays on the football field, cheered on by adoring fans. Tutors attended to your every academic need. You attended class when you felt like it. Sure, you worked hard. You lifted weights, ran sprints, studied plays, and soon became one of the top football players in the country.
Your best friend was assigned to the 101st Airborne Division. While you were in college, he deployed to Iraq once and Afghanistan twice. He became a Sergeant and led a squad of 19 year old soldiers who grew up just like he did. He shed his blood in Afghanistan and watched young American men give their lives, limbs, and innocence for the USA.
You went to the NFL combine and scored off the charts. Your hired an agent and waited for draft day. You were drafted in the first round and your agent immediately went to work, ensuring that you received the most money possible. You signed for $16 million although you had never played a single down of professional football. Your best friend re-enlisted in the Army for four more years. As a combat tested sergeant, he will be paid $32,000 per year.
You will drive a Ferrari on the streets of South Beach. He will ride in the back of a Blackhawk helicopter with 10 other combat loaded soldiers. You will sleep at the Ritz. He will dig a hole in the ground and try to sleep. You will “make it rain” in the club. He will pray for rain as the temperature reaches 120 degrees.
On Sunday, you will run into a stadium as tens of thousands of fans cheer and yell your name. For your best friend, there is little difference between Sunday and any other day of the week. There are no adoring fans. There are only people trying to kill him and his soldiers. Every now and then, he and his soldiers leave the front lines and “go to the rear” to rest. He might be lucky enough to catch an NFL game on TV. When the National Anthem plays and you take a knee, he will jump to his feet and salute the television. While you protest the unfairness of life in the United States, he will give thanks to God that he has the honor of defending his great country.
To the players of the NFL: We are the people who buy your tickets, watch you on TV, and wear your jerseys. We anxiously wait for Sundays so we can cheer for you and marvel at your athleticism.
Although we love to watch you play, we care little about your opinions until you offend us. You have the absolute right to express yourselves, but we have the absolute right to boycott you. We have tolerated your drug use and DUIs, your domestic violence, and your vulgar displays of wealth. We should be ashamed for putting our admiration of your physical skills before what is morally right. But now you have gone too far. You have insulted our flag, our country, our soldiers, our police officers, and our veterans. You are living the American dream, yet you disparage our great country.
I am done with NFL football and encourage all like minded Americans to boycott the NFL .”- Author Unknown but spot on.

The lady in the following video, The Activist Mommy, has an opinion about kneeling football players.  Joe says there is nothing wrong with her IQ, her analysis, her conclusions.  Another major needle swing on the Joe libidinal meter (Joe prefers analog for certain situations):

Joe says give the final word to Liz Weeler: 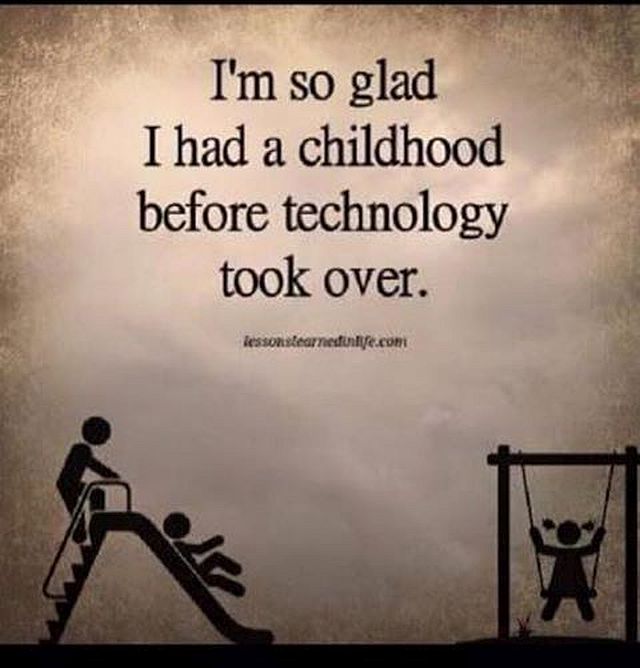 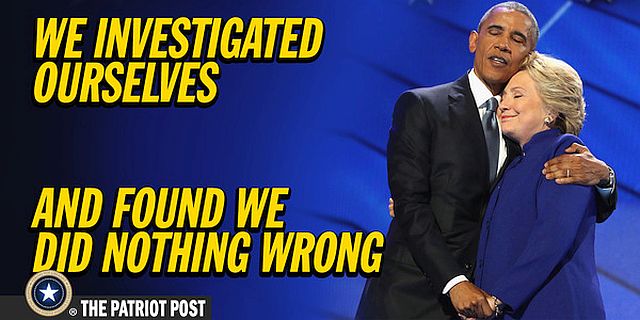 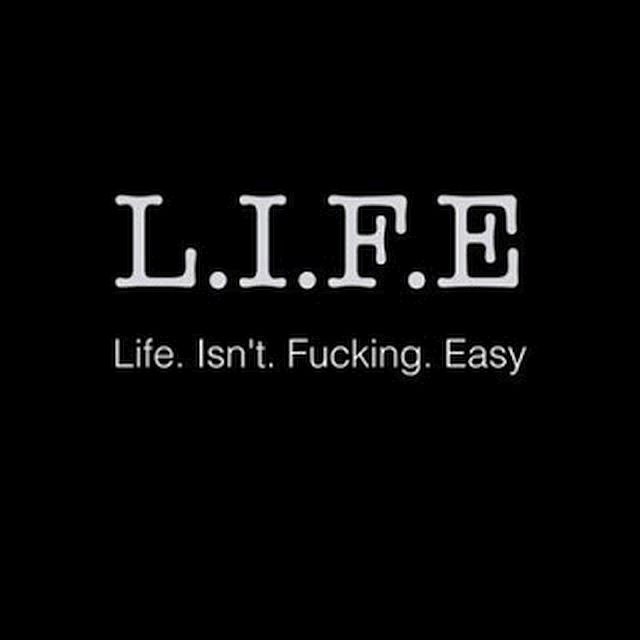 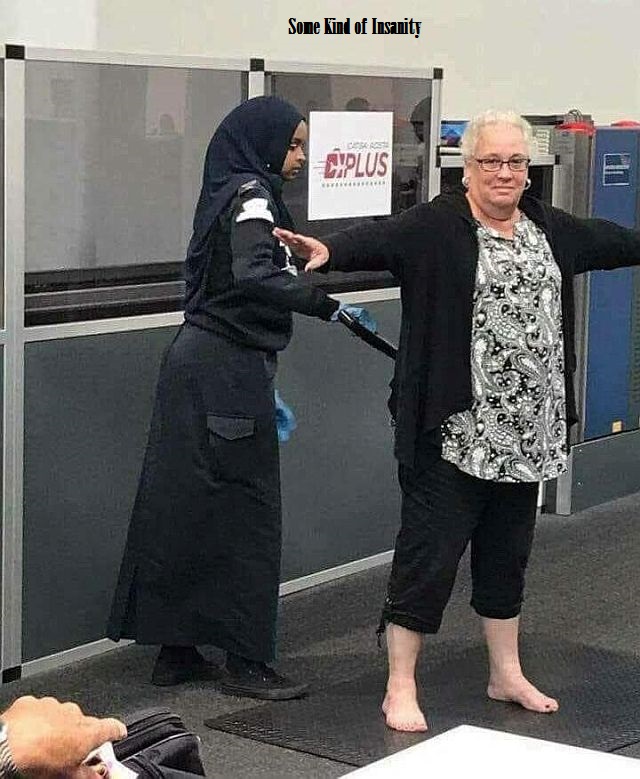 This week the sermon is a discussion between Jordan Peterson and Ayaan Hirsi Ali.
This woman is an heroine.
This man is a national treasure.
An incredible interview:

This week in Vernon has been very unproductive for the Joe.
The David did OK, but sour weather makes Joe slump.
Gray grey skies.
Rourke says the sky is sad when it rains, ergo it was a sad week.
Sunday rain cleared by mid-morning.
Joe was able to turn on the tunes and get a few things accomplished outside.
Yea!
Time to start the annual beard growing.
Actually, time to stop the shaving until March.
The damn beard never stops growing……. 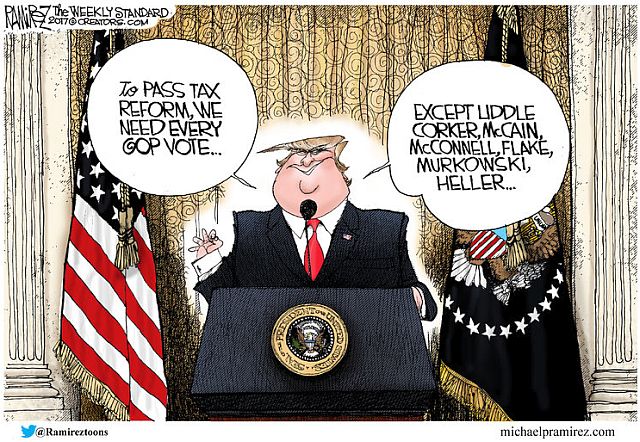 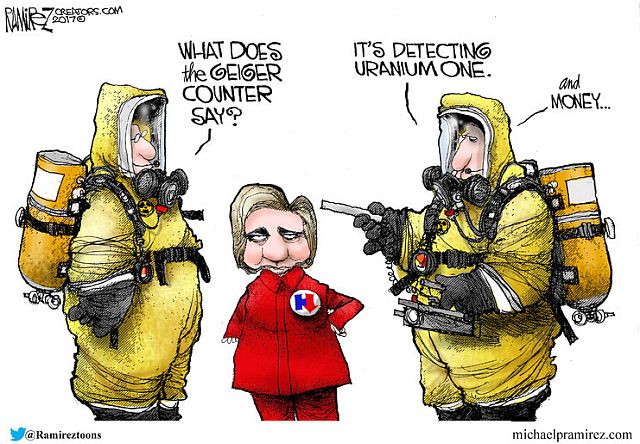 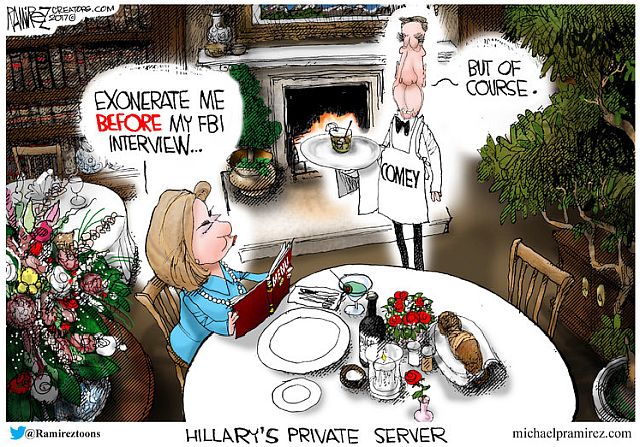 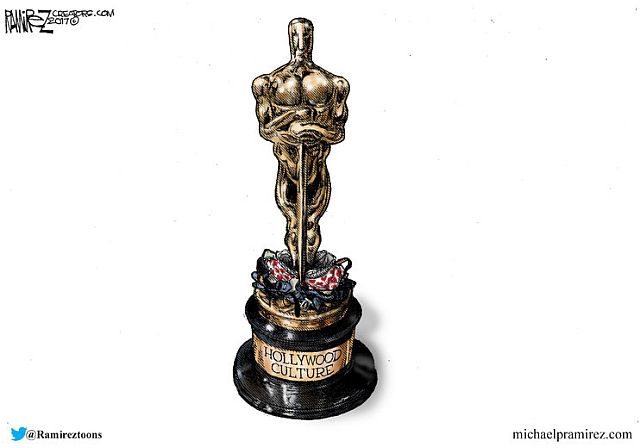 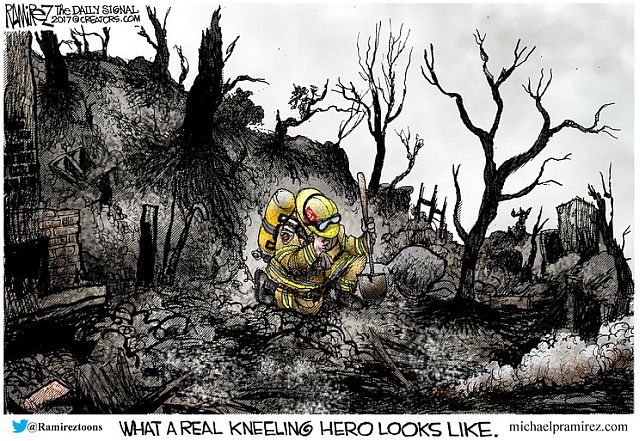 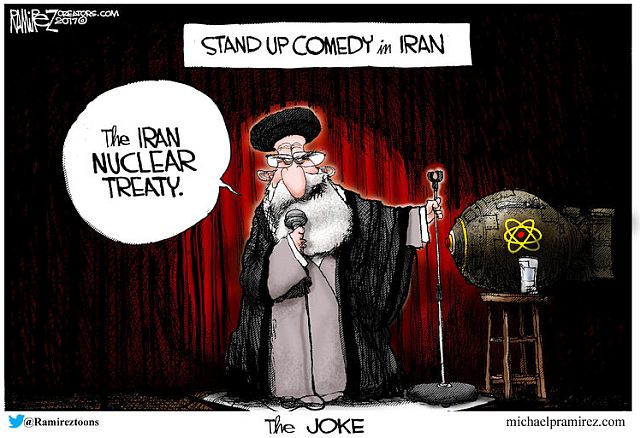 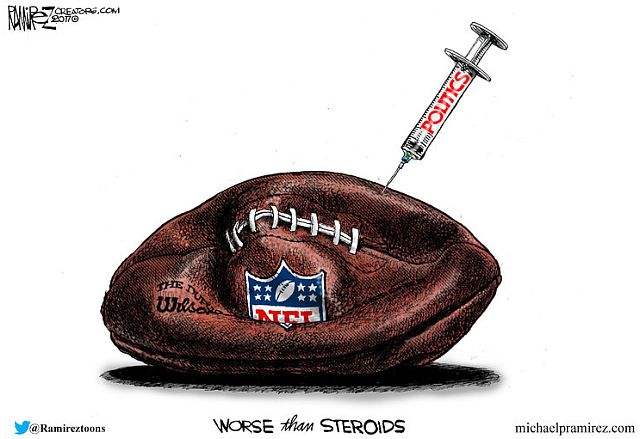