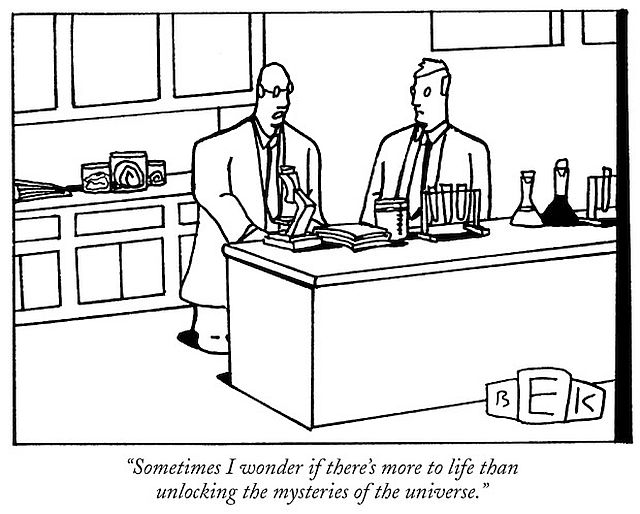 Joe’s Comment – Finding a balance in life is tough, especially for workaholics.  These two need to hear a few lectures on “Maps of Meaning” from Dr. Jordan Peterson.  Or have a few beers…..

The Real Heroes (Part II) – Musings on Texas
Hurricane Harvey has subsided as we write.
Many folks have given much to minimize the impact on the old, the young, the infirm, and the unfortunates who happened to be in the wrong place at exactly the right wrong time.
Hurricane Irma is on the way (16th most powerful storm winds in recorded history) – a different category of storm (read here).
Joe and I were alive when Hurricane Hazel caused chaos in 1954 – Hazel was the winner of the biggest baddest nastiest hurricane of the year glory.  We remember the railway underpass near our house in Toronto was full of water, and the shores of Lake Ontario were littered with boats big and small.  We were 680 miles inland!  Hazel was a “category 4” storm (see above “category” article).
Joe has always maintained that real chaos is just around the corner.  The conflict with Nature, especially foul weather, is one of the three biggies, the other two being man vs man and man vs himself.  The weather, aka “Mother Nature” is a force of such magnitude that the best humanity (us lovable parasites) can do is somehow ride it out until the fury has abated.
What are some of the challenges Harvey left?
– Infrastructure, private property, and business damages of colossal magnitude.
– Sanitation dangers from a compromised water supply and sewage disposal network, the rotting carcasses and vegetation floating about, the loss / diminished health care facilities closed or crippled by the flooding.
– Looters.
– One of the greatest challenges is daily sustenance – food and water – the estimate is one million people displaced from their homes / businesses / normal life in Texas.
Yet life goes on…..
If food production / delivery to cities is disrupted for whatever reason, the worst of human behaviour will present it’s ugly self.  Starving people are not known for making good choices.
An example close to home – we have seen mild disruption here in Vernon, BC when heavy winter weather closes the major highways for a day or two – the empty shelves at your favorite store come out from under their goods to say hi!
How do the unseen heroes keep the system operating when a breakdown occurs?
Joe and I found this article very insightful – how can the supply lines for food and necessities be optimized for minimal disruption? 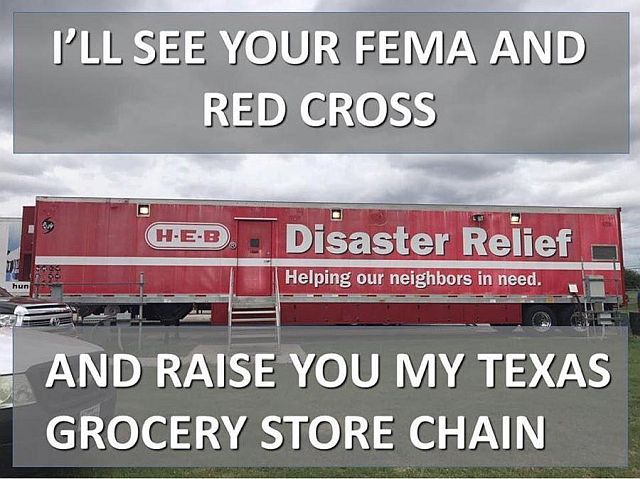 Quote from the article at American Digest –
“The largest grocer in the state is H-E-B, with about 350 stores scattered throughout Texas and Mexico. At a time when retail watchers question the future of brick-and-mortar stores due to Amazon’s continued ascendance, the 112-year-old retailer is drawing widespread praise after managing to open 60 of its 83 stores in Houston last Sunday, hours after Hurricane Harvey slammed into Texas as a Category 4 storm. (Now, 79 of the 83 stores are open.)”
Read the rest of the article here.
My comment is that dedicated and focused people can perform miracles. 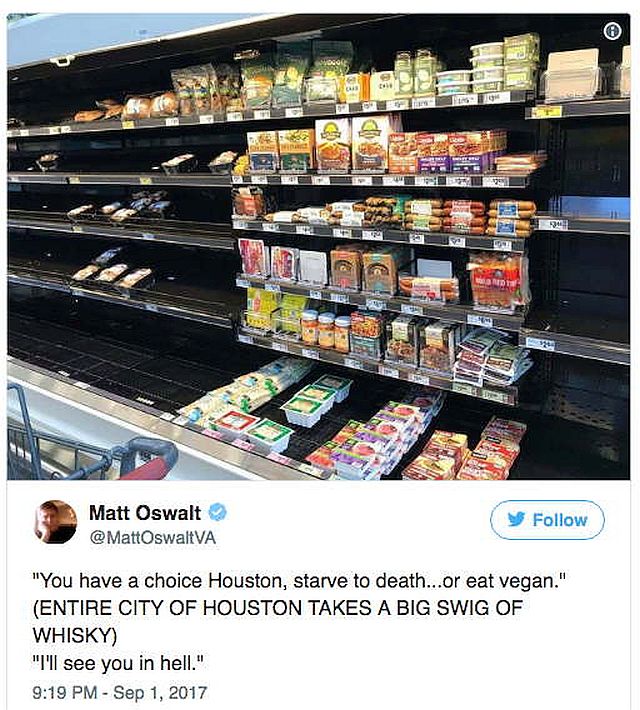 The Whiz Kids are working diligently to remove drivers from vehicles with AI (artificial intelligence).  Try-ers gotta try.
The produce and necessities delivered to the H-E-B stores was undoubtedly conveyed by trucks.
Joe is adamant: heavy transport / heavy machinery will always have a Master at the helm.  Consciousness is mandatory!
Joe says he’ll have an AI controlled vehicle about the same time he has a “flying car”….. (Modern Mechanix from July of 1935) – 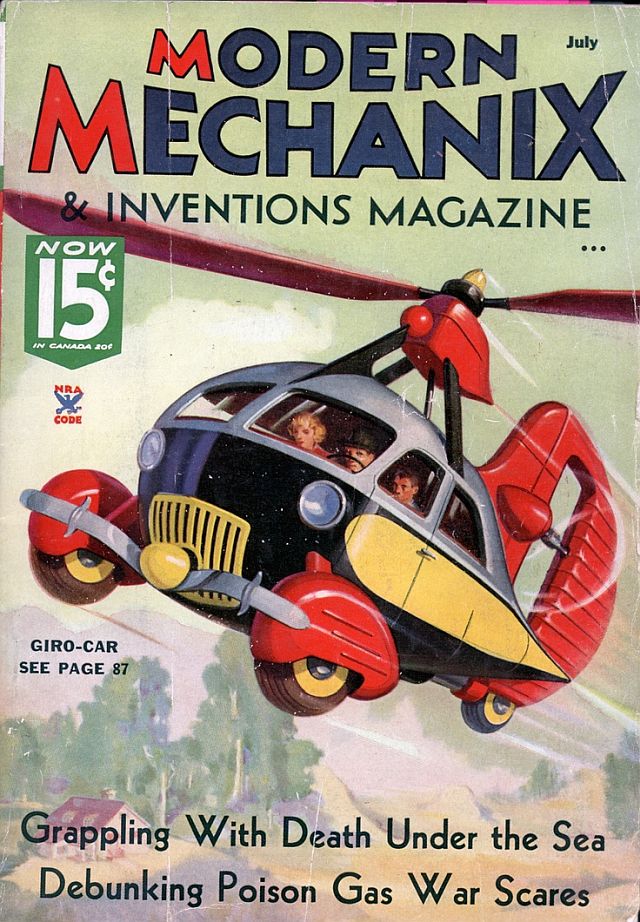 Another annoying voice bleating “Climate Change®” is taking advantage of the one-two punch of Harvey and Irma to advance their political agenda.  The “Chicken Little People” are once again insisting that the very act of thinking these two hurricanes are normal weather is paramount to treason and those who think such heresy should be punished.
To those people Joe gives the gift of history –

Minimum Wage Blues
Joe and I were anxious to work our first job at $0.50 per hour.
We worked at the Calgary Gun Club, “loading” or “pulling” skeet and trap clay targets.  Ken M. helped us get the job.
The time period was 1967.  The 50 cent wage in today’s money would be $3.58 per hour.  That first job (and working for father Donald D.) taught Joe (and eventually me) what a “work ethic” was, especially the difference between a good ethic and a bad ethic.  It also taught us the value of a dollar.  We were very frugal with our scanty funds.
These entry level jobs allowed Joe and I as well as thousands of other youngsters to enter the workforce and develop marketable skills.
This wage also allowed us to learn how to handle our money, because we knew how long and hard we had to work to earn those few precious dollars.
Here is the argument for entry level wages from Prager U.
Entry level work was never intended to be a living wage:

Political Promise
Joe and I have pretty much decided that the average voter in Western countries is uneducated, gullible, delusional, and easily hoodwinked.  We came to that conclusion honestly: we were just that voter as a young mans (Bill C16 says I can say it that way – pronoun freedom(s)!)
The French election did not produce change.  The president is a childless man with an Oedipus Complex married to a woman 25 years his senior.  Joe says he might wear diapers to bed…
The German election happens September 24th.  Ms. Merkel is seeking a 4th term as chancellor of Germany.  Achtung!
Imagine our glee at hearing (through the EU media “blackout” – see no evil, etc.) that Angela Merkel had tomatoes thrown at her at a recent political rally.
Joe says all is not lost when heckles and jeers and tomatoes meet Ms. Merkel’s bid to destroy Germany.  What can she expect with her iron-fisted control of the EU, and utterings such as “Sometimes listening a bit is not a bad thing”.
She is another childless European leader, whose past as a commie apparatchik – she was a member of the FDJ (trans. – Free German Youth) – allowed her free access to the West as a high ranking Commie Bastard(ette). 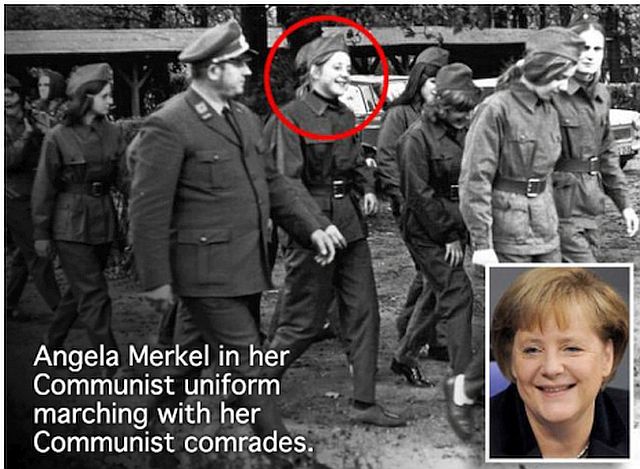 She was opposed to East-West reunification.  Two brave Germans – Ralf Georg Reuth and Gunther Lachmann – have penned a not so complementary history of her early political career titled “Das Erste Leben der Angela M” (The First Life of Angela M.).
Is Angela Merkel the revenge of the DDR?  Food for thought at RedGreenAlliance.
Joe and I hope the German people can shed their collective guilt about WWII and get down to doing what they do best – making beer!

Health Care vs Preventive Care
Joe and I didn’t much like it when we Canadians established mandatory single payer “universal health care” in 1966 with Lester B. P. as Prime Minister.
It seemed unfair at the time for a healthy 17 year old male.
It still seems unfair now for a healthy 68 year old male.
Joe and I have ranted many times against the (mandatory) guidelines that are necessary with a finite budget for health services – otherwise the entire government budget (plus whatever they could “borrow”) would be consumed every year by health care.
Not that Joe and I haven’t needed a doctor, or medicine.  Our appendix operation delivered a bill of zero dollars, and the response time (literally one day) as well as care received was exemplary.  Not the point we’re making.
Here are two points we want to make:
1.  The cataract surgery and subsequent lens replacement we needed (our now excellent cyborg right eye) was a dance of almost three years – 1 1/2 years “qualifying” (the cataract(s) have to be so bad that prescription lenses cannot restore partial vision), and another 1 1/2 years waiting in line.
2.  Friend and nurse Maureen M. says “there are only two types of men; those who have a hernia and those who will get a hernia”.  Joe and I met the “man” criteria – we developed a hernia that made our belly button bulge and balloon.  The dance to have it repaired was abandoned after 3 years of doctor visits, referrals to specialists, waiting for access, and (finally!) a last meeting with the new specialist who was most pleased to inform we (Bill C16 privilege) that we didn’t have colon cancer!  Joe said enough bull shit, we aren’t playing any more.  On a side note, the hernia was mended along with the appendix removal after Joe and I made nice with the young doctor in Calgary who performed the operation.  That is another story, from a previous Sunday Rant – 1313.
Time for a Prager U explanation of why health care costs so much.  It is USA focused but the ideas are universal:

Pat Condell on Europe
Joe and I have been watching the encroachment of Islam on the West for years.
Pat Condell has lived what we have been watching.
In our 10 + years of following his videos, his level of contempt for Islam has migrated from humorous disregard of the backward intolerance of that “religion” to repressed fury at the political nabobs who are sacrificing Europe wholesale.
He has been silent for some months.  Joe speculates he has had a health issue.
Here is Pat Condell, alive and looking well.
Just who do you believe?:

Which begs the following – 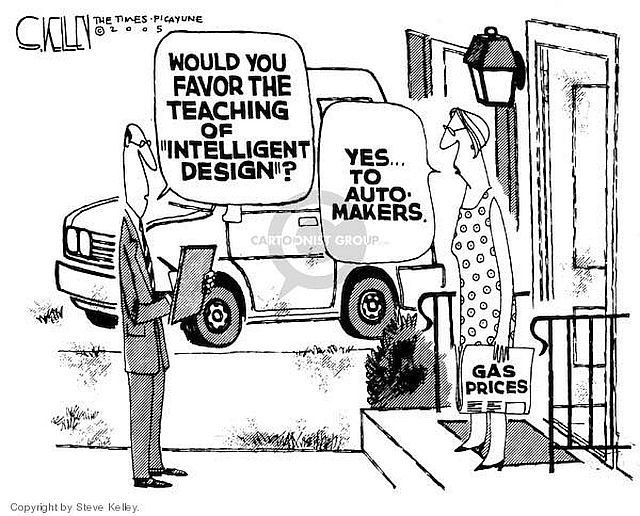 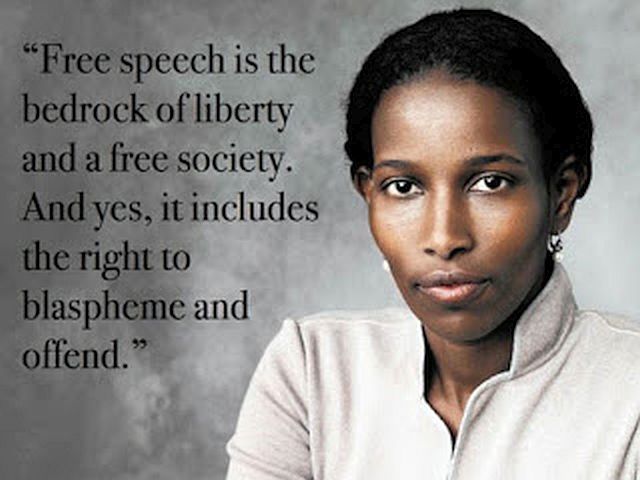 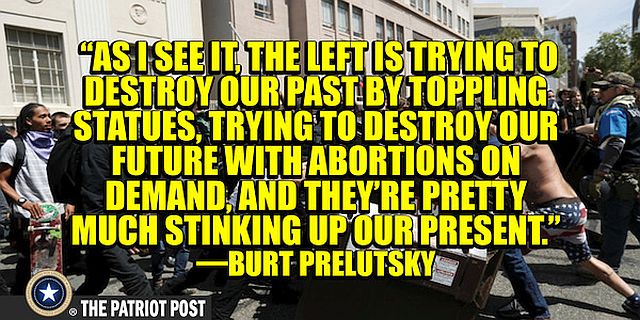 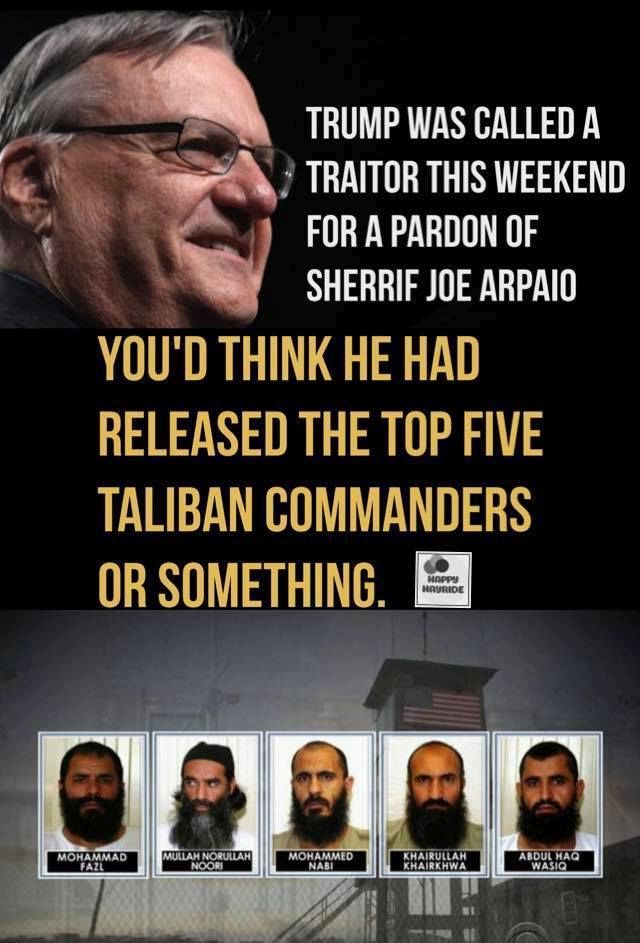 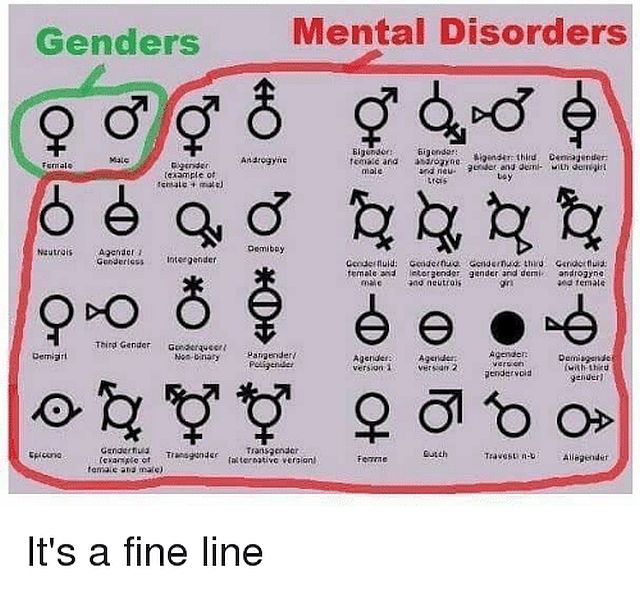 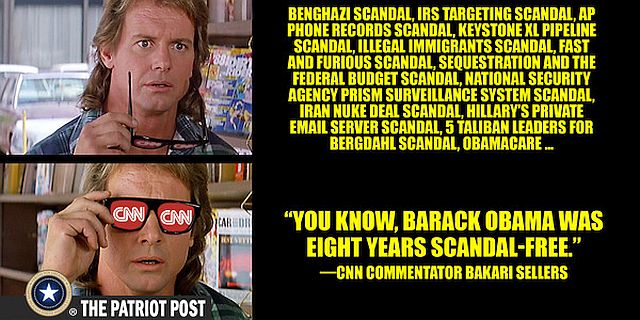 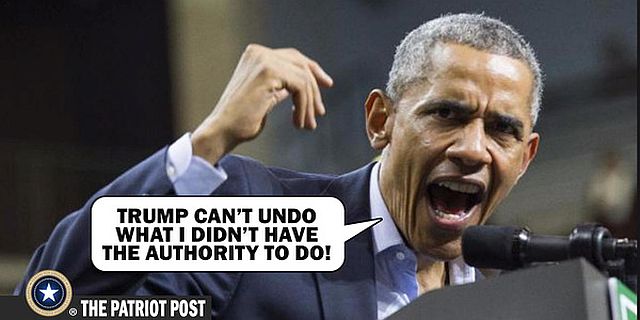 This week in Vernon has been a transition into Autumn.
Compounded by fires clouding the sky, the daily offering has been warm, not hot, but mild.
On Saturday the skies gave up a rain that cleared the fire mottled smoky sky.
Sunday was the first day in a month (or more?) with clear blue smokeless high visibility skies, moderate temperatures, and very little wind.  Damn near perfect fall weather, but waning for Summer.
Joe is having a hard time accepting the change of season this year, and it hasn’t even happened! 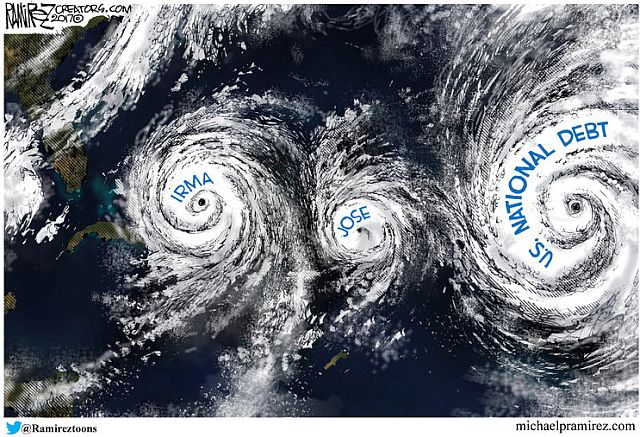 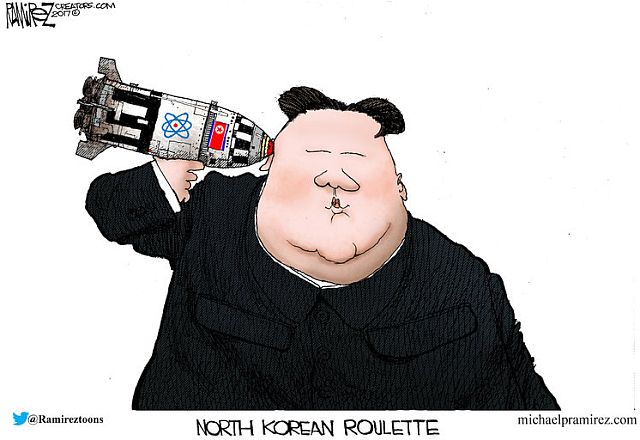 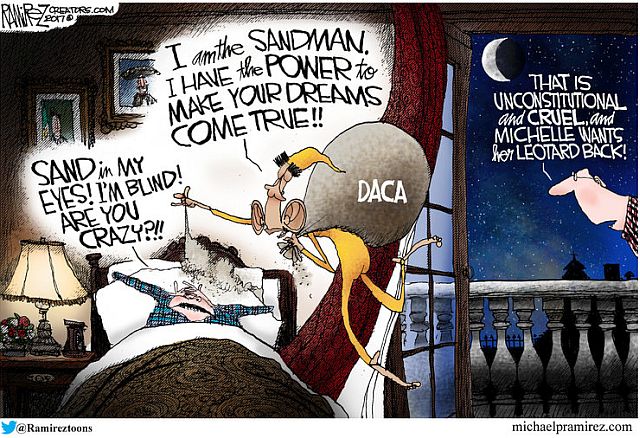 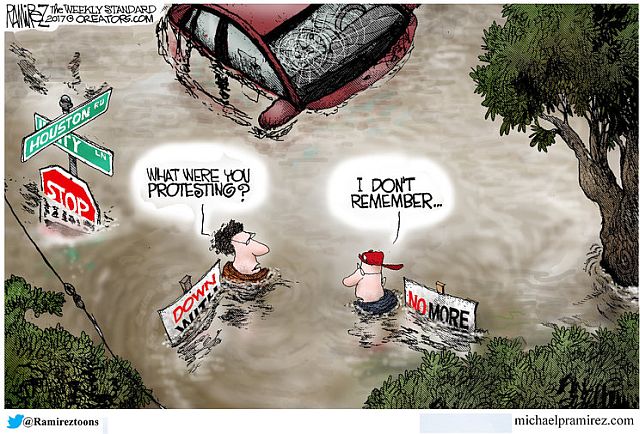 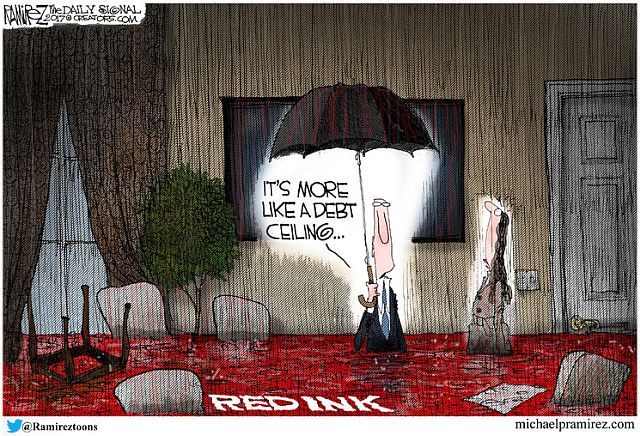