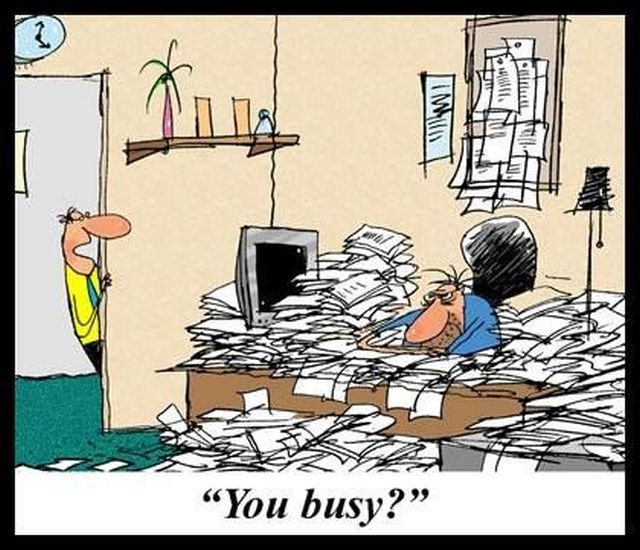 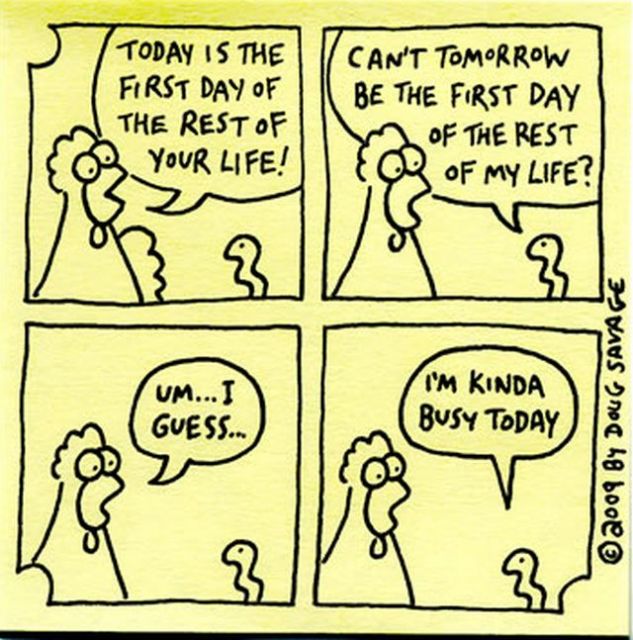 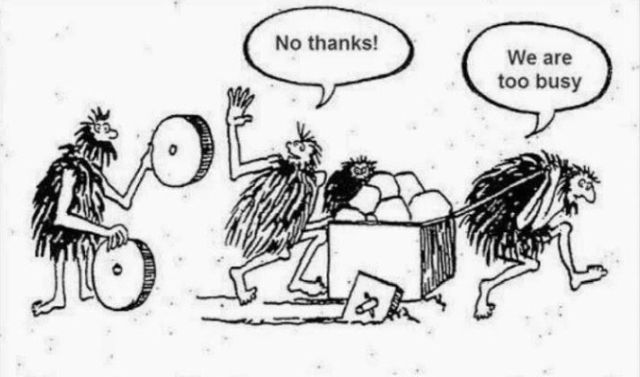 Joe’s Comment – My week has been all three of these cartoon cliches; a triple crown.
Some success.  Some failure.  Some undecided, unfinished, indeterminate, some frustration.  The above sequence is about right.  I entered the week with a veritable mountain of tasks and promises to keep.   As the Doug Savage cartoon suggests, changing my outlook and attitude and perspective might be beneficial: a philosophical pause to reflect and adjust.  A goal reassessment.  Alas, too damn busy to see and seize the opportunity to change.  The final cartoon suggests I might be operating in a “fight or flight” stress laden personal environment of too many promises and not enough time to deliver.  Too busy to be open to fresh ideas, too preoccupied to work hard and work smart.  Too head down, too nose to the grindstone.
Perhaps a cup of cream with some hot tea might help…..

QDMcD
Saskatchewan’s ambassador releases a new video most every Monday.
Here is the latest from Quick Dick McDick:

Talks We Appreciate
Two great Canadians, Jordan Peterson and Rex Murphy, had a delightful conversation about life and times.
Joe and I have marveled at Mr. Murphy’s verbosity in the past.  How a man can have so many words eruct from his mouth like foam from a rabid dog, yet make perfect sense, amuse, and communicate so efficiently is some sort of audible oral miracle.
You can tell that there is mutual admiration, more than camaraderie, and a shared understanding of the obsession to better oneself.
While listening, we gave Dictionary.com a real workout.
We enjoyed this conversation immensely:

Epoch Times
Joe and I support the Epoch Times.
We have been reading their Internet content for well over a year, and they speak truth – confirmed by time and events.
Joe says they ring the bell more frequently than any other main stream or semi-main stream “journalists” do.
Before discussing the article in question, which delves into the Canadian and U.S. government involvement in the level 4 virology lab in Wuhan China, we would set the stage with a few quotes attributed to Winston Churchill. 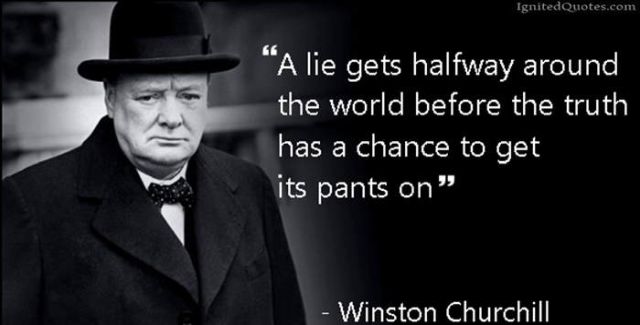 People in general have quirks.
Believing without verifying is such a quirk.
How do folks spin the wheel of belief and blindly accept the pointer’s chance selection?  We’re sure there is a lifetime of psychology and behaviorism study required to answer that simple question.
Joe and I think these two lovely German expressions cover a whole lot of the reason – Weltanschauung and schedenfreude.  But we can’t eliminate the cognitive dissonance that assaults everyone everyday from every direction.
COVID-19 was a lie that went twice around the world assisted by the CCP (Chinese Communist Party).  Will the thrice attempt be stymied?

Despite the protestations of many “professionals” who actually know about viruses and research and the scientific method (we put professionals in quotes, because if “Dr. Fauci” is a professional, there is something seriously wrong with that moniker), the governments of the world, for some reason or set of reasons, ignored the facts set before them.  Or, disallowed the facts to be heard.

The truth about COVID is precipitating from the maelstrom of opinion generated with and without the help of real science, real data, real experiment and testing.
Some entities have been shouting the truth since the beginning, but their voices were drowned by the hierarchy of authority and power.  The MSM has been complicit in spreading lies, maliciously.  The complicity of China via the CCP, the lies, deception, and aggressive tyranny of government, especially in the West (their panic means abandon the law at the first “opportunity”), the agenda of the MSM to spread lies, deceive, and character assassinate with informal fallacy, all these things take a toll.
You must ask yourself….. why?
Joe and I certainly did.  We don’t like the “box canyon” conclusion we are galloping toward.  Something evil is loose.  There be dragons….. 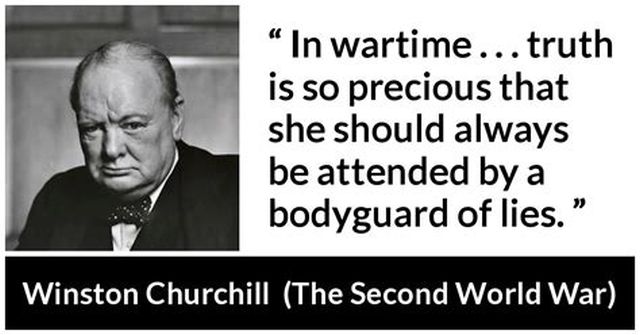 This last statement from Churchill is the most chilling.  The truth about COVID has been attended by an immense bodyguard of lies and liars at a global level, across all levels and strata and castes in the culture(s) around the world.
Truth and deception have been sisters.  Think the ugly step-sisters in Cinderella, the ugly sisters in Shrek, think Cain and Abel.
Our conclusion, if Mr. Churchill knows that of which he speaks, is we are at war.
Next big think is….. who are we, and whom exactly are we at war with?
This is our lede into the Epoch Times article about Canada’s involvement with the Wuhan level 4 virology lab.
The article is here.
Canada – not Joe and me and millions of mud peckers – but the Canadian government, is impugned, as is the NML.  Along with the U.S. government, the W.H.O., the American NIH and NIAID, and most glaringly, the WIV.
Lots of acronyms.  They are all spelled out in the article.  Take the time.
There are parliamentarians and elected officials challenging the official narrative all over the West and (we presume) the world.
Joe and I reiterate – viruses are immensely older than humans.
The relationship is complex and “eternal”, assuming humans will endure – it is a certainty viruses will.
When the Nazi Scientists© of the world (they’re everywhere, they’re everywhere!) peek under doG’s skirt, the consequences can be dire and terminal.
Or they can be enlightening and beneficial.
Perhaps they can be both.
The big question is how do you direct, if you can’t control, the brigade of Nazi Scientists©?
Joe wonders if they’ve tried PopTarts…..

Ivor Cummins
An update from an engineering mind.
Ivor is refreshing.
He is Irish (as is Dolores Cahill), listening to his voice is a pleasure, but most importantly, he analyses data.
How quaint.
He has iterated and reiterated the facts for well over a year.
Mud peckers like Joe and me are listening.
We pay bloody close attention with all ears and eyes on war emergency power setting.
Why the intense concentration?
Because we have a dog in the hunt – our admittedly worthless carcass is, after all accounts considered, is our worthless carcass.  A gift from our creators.
This is serious stuff.
Serious, but simple as this – our mom and dad created our life.  Brought us into existence.  Not out of thin air; normal biology at play.  Our assumption, otherwise accusations and aspersions of doG complex will ensue.
Next step, after creation, my mother allowed me to be born (maybe de rigueur at the time, but consider Roe vs Wade and the cumulative toll to date of anguish, misery, death).
The point we are laboring (birth pun right there) is captured nicely, if not succinctly, by the Bon Jovi song “It’s My Life“.  A quote from same –

We are indeed, with copious trepidation, “standing our ground” – if our life isn’t our life, then who in green acres’ life is it?  Serious question.
Joe goes further and says f**k “common good”, f##k government, f&&k coercion – there are only individuals.  Without accurate data how can people make decisions (good or bad)?
Enter the dragoon – Ivor Cummins.  Armed with wit, intelligence, good will toward fellow men (and women, too), armed with data and statistics and a steady hand on the reins.
Found on Ub2b.  Danger of limited shelf life:

Humor Intermission
The Internet is a fabulous resort.
Joe and I visit every single day.
It is also a practically infinite resource.
For research and news and technical information.
And entertainment.
We like music and learning and art and movies.
We also like humor.
This understated comedian makes us grin and snort and laugh out loud.
Here is a half hour with Chad Thornsberry:

Space X
Another successful launch – 17 launches this year to June 3rd.
That’s an incredible 3 per month!
Another successful recovery of the first stage – a first for this particular first stage, and the 86th successful recovery.
This is the 22nd cargo resupply mission to the ISS for Space X.
The numbers of successful launches and landings are increasing and impressive.
Joe says it will never be less than a spectacular achievement.
I say the cows in the field and the monkeys in the jungle have no idea……

Music Stuff
Why 12 Notes?
How did Joe and I escape learning any music theory?
Was Mrs. Kennedy (grade 7) remiss in her curriculum?
We think not.
It was a flaw in our character – Joe and I concur.
But, it is better late than never.
This young fellow, David Bennett, made a video we found helpful.
Our interest is piqued when the physics / math of music is analyzed.
With much sorrow we realize we may never sing with the Angels, but perhaps will appreciate their harmony even more:

Music Make-up
Who knew?
Is this putting lipstick on a pig?
Joe and I had no idea about the natural and electronic methods of producing and/or controlling reverberation in respect to music, instrumental or vocal.
When we listen to a philharmonic orchestra or a Pink Floyd concert, Joe and I are flummoxed at why we have never considered the effect of the space.
An interesting video of many different sound enhancers / modifiers that we have undoubtedly heard in the popular music we listen to and enjoy.

Veni Sancte Spiritus
From a time of Crusades.
A Templar chant.  “Veni sancte spiritus” means “Come holy Spirit”.
Very powerful.
Very soothing.
Joe says it is music we could perform, or delude ourselves we could.
From a Ub2b channel called “Adoration of the Cross“, where Chants Are Us: 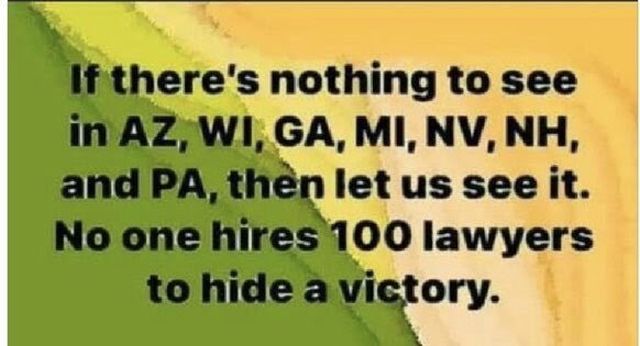 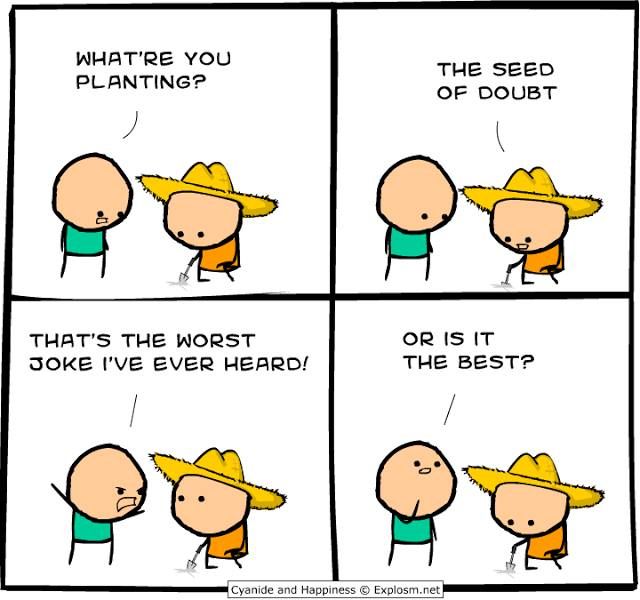 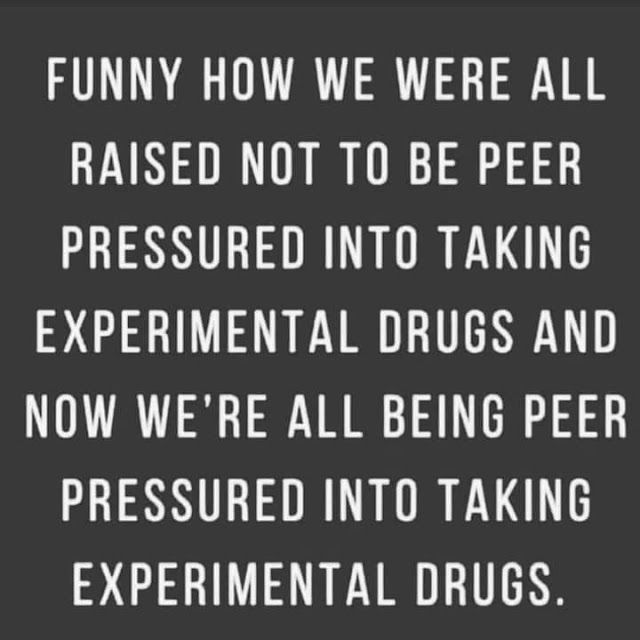 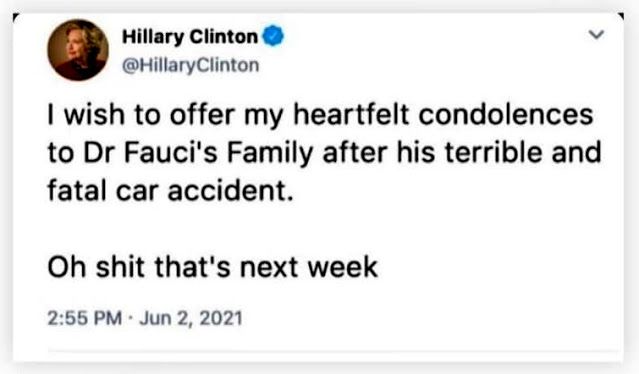 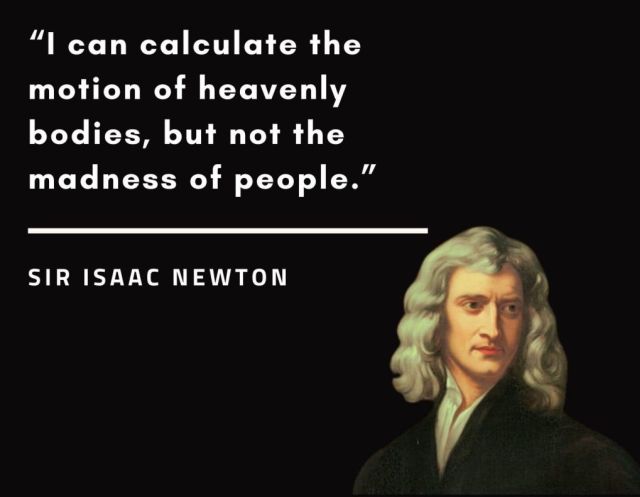 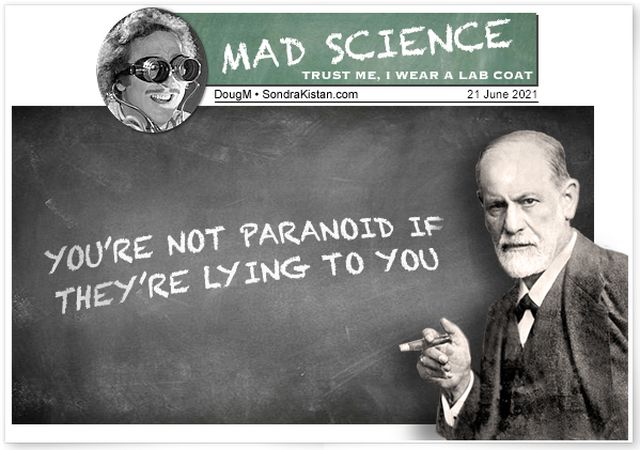 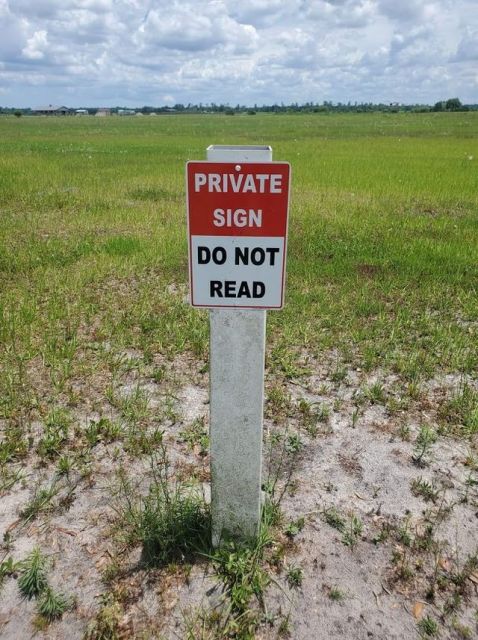 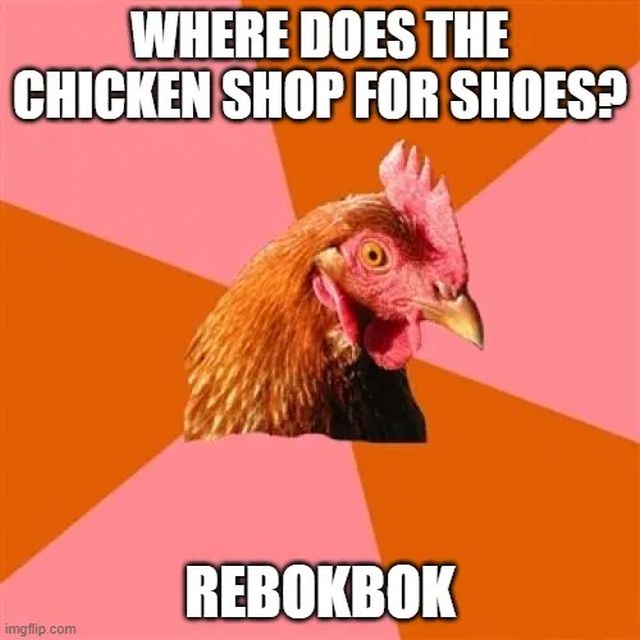 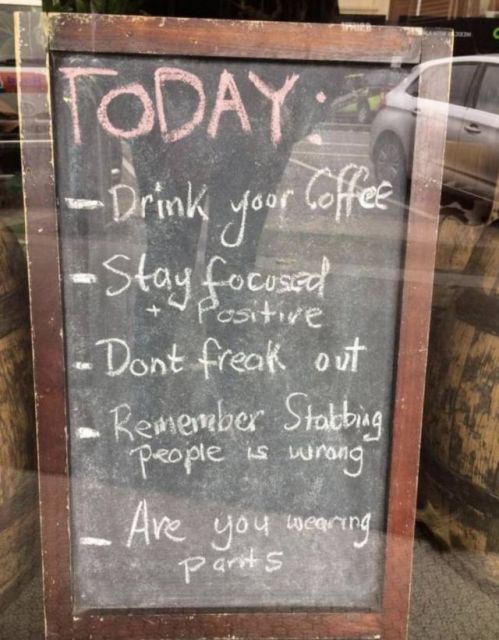 We think Jordan Peterson is as good as ever.
This week’s sermon is Dr. Peterson talking to Yeonmi Park, reviewing her history, her miraculous escape from North Korea, her current identity, her ambitions, her book.
The story she tells of living in North Korea makes a person realize that humans are, at their most base level, programmable meat puppets.
When Joe and I hear from this beautiful young woman’s own lips that her North Korean culture and language did not include the word “love” or an equivalent, that worship of the “dear leader” is the closest emotion to love allowed, we realize just how alien her Weltanschauung is from our own.
How does the death penalty for seeing the World Wide Web / Internet equate?
What is the calculus involved in not knowing what the map of the world looks like, or what countries exist, or who the people in those countries are?
We have mentioned her in previous rants: Sunday Rant – 4820, Sunday Rant – 4019.  This interview is priceless, because Jordan Peterson.
Watch this video.
Her story is only one person’s experience of life in North Korea.
How many other stories like hers in North Korea or anywhere else?
Jesus wept.  The human condition is tragic.  Is there redemption?:

This week in Vernon BC the weather stopped being exceptional.
Not exceptional, but extremely acceptable.
There were a few very warm lovely cloudless days.
There were more cloudy days, some wind, and some rain.
Some rain at night (after the hottest days).
Some rain during the day (cloudy windy days).
Joe and I have been breaking in some shoes we have been wearing for two years.
The first six months were foot agony – blisters and sores.
Our feet and the shoes finally reached a compromise.
The left shoe has broken stitching on the left side from front to back.
The right shoe is totally ruptured.
Joe jokes our feet are wider than they are long.
5-E wide, which IS a joke.
Very OK and comfortable when it is dry and hot. 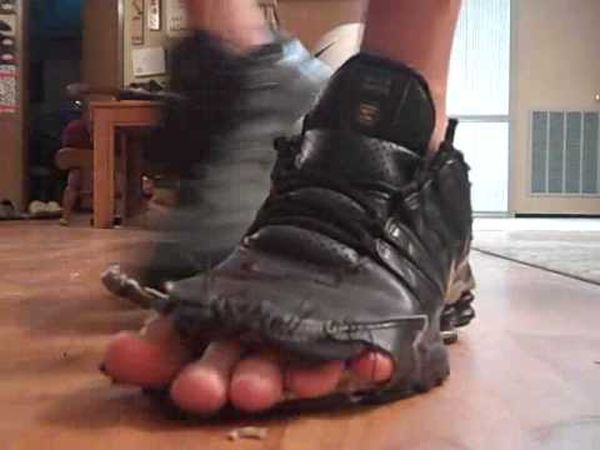 Not so much when it rains….. 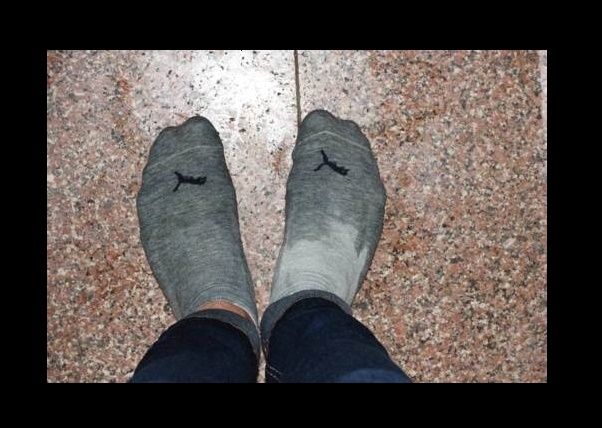 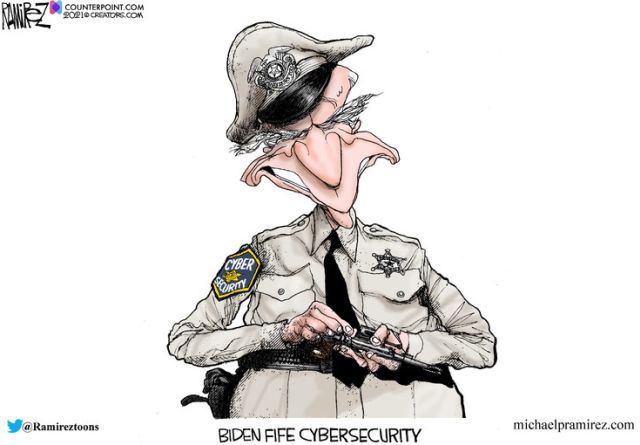 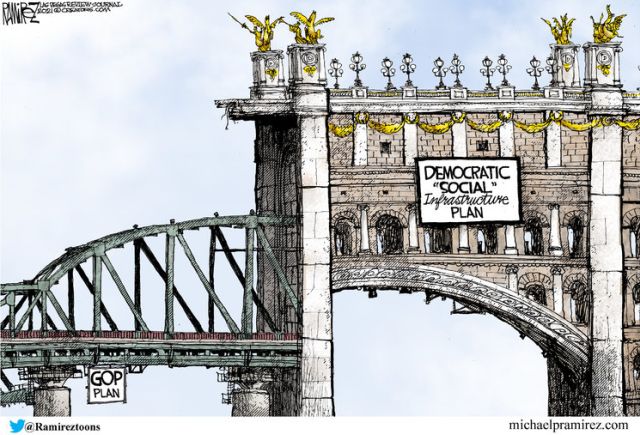 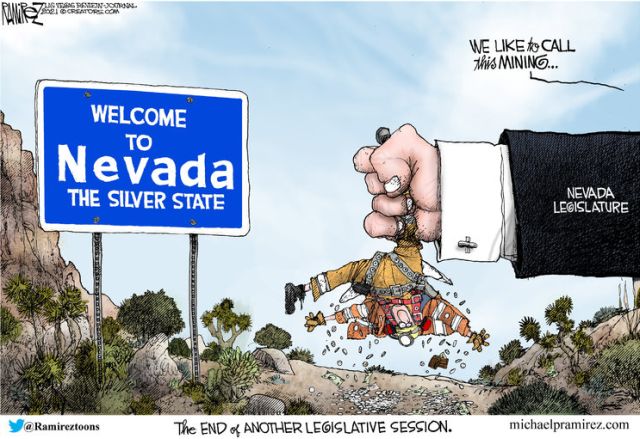 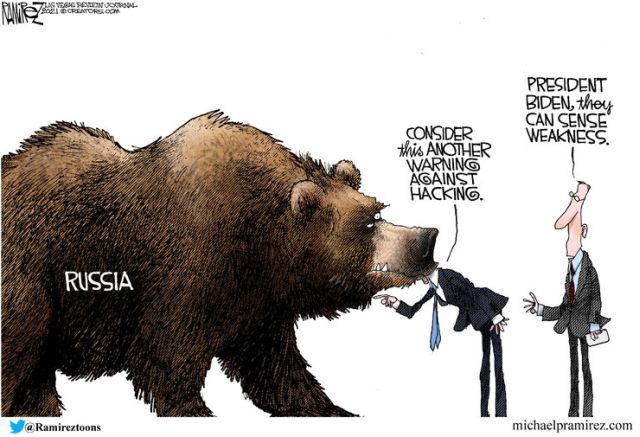 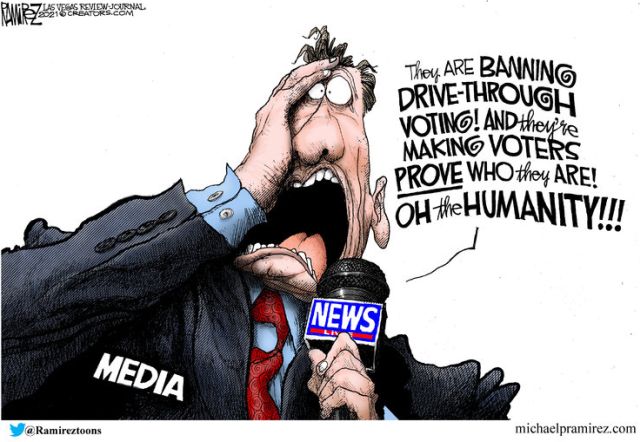