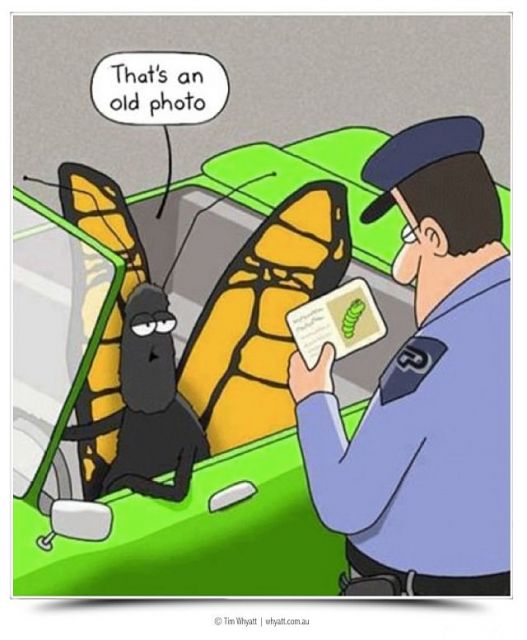 Joe’s Comment – It was a year ago on June 8th that us BC residents went to the polls and committed NDP sepuka.  For the 4th time.
It was also that same day the RCMP came a knockin’ on my door later that night and took me to jail for some remarks I (moo!) uttered at the poling station.
Two things to say about that and that……
One, I can’t guarantee my big fat mouth won’t get me the same treatment (or worse) in the future.
Two, thanks again (and again, and again) to the many friends and neighbors for the fine character reference letters  you wrote to offset the impression the court might have, based on the claims of the accuser(s).
As it turned out, the charges were dismissed by the court with a caveat.
All is well.
That was an old photo.
I’m different now….. 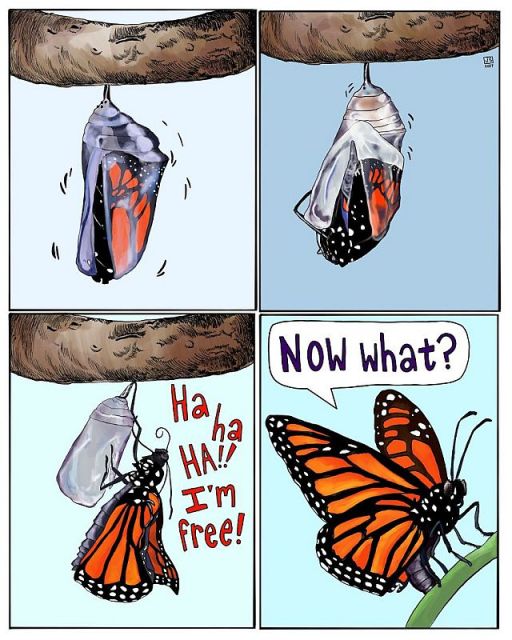 Let’s hear it for metamorphosis!

D Day (6 June 1944)
Joe and I were born 5 years after D Day.
How must it have been for thousands of young men who established a beach head along the coast of Normandy, heavily fortified with defensive structures and armament by the German occupiers?
There were more than 4,000 allied soldiers killed on the first day, June 6th.
The Americans stormed Utah and Omaha.  The British Sword and Gold.  The Canadians Juno. 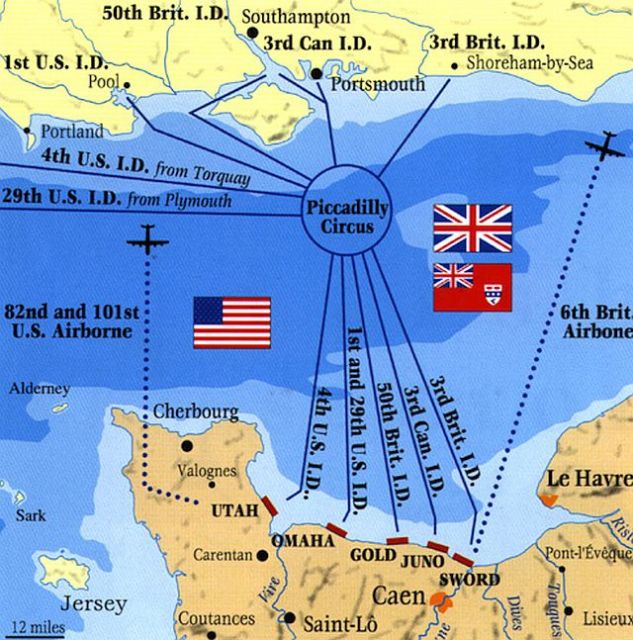 This is the beginning of the end for the German war machine.
From this time, June 6th 1944, until 2:41a.m. May 7th 1945, when an unconditional surrender was signed, the German forces fought a loosing battle against determined allied forces.
Why were Joe and I born 5 years after D Day?
Because April 29th 1945, the American 3rd Army, 14th Armored Division liberated Stalag VIIa, freeing my future father.
General George Patton arrived at Stalag VIIa the next day. A quote about his visit from this article:
“As he walked briskly through the camp General Patton occasionally stopped and exchanged a few brief words with small groups of American prisoners. When he came upon my group the General paused, looked at us, shook his head in disgust at the sight of the thin, unkempt scarecrows standing before him and said in a low voice, “I’m going to kill these sons of bitches for this.”
That is the voice of justice.
A few reels of D Day film that haven’t been widely viewed:

Tell Me Again, Oh Wise One
Chief Rainbow Socks persists (with the aide of his cohort) in pedaling the CO2 fantasy – that by “controlling” CO2 emissions with taxes, humanity can affect climate. 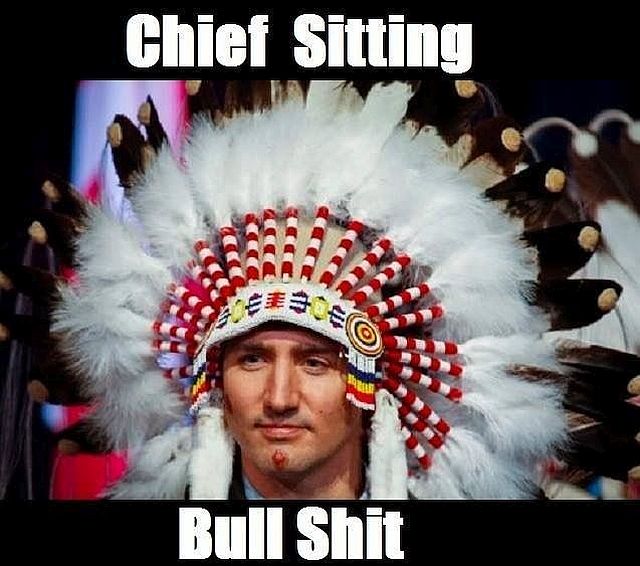 Joe says don’t be so hard on our fearless Mr. Dress(up).  Logically and technically, every single exhalation of breath adds to the CO2 total.  It only makes sense that to stop breathing decreases CO2 by one breath.  Just logic.  The FACT that the amount of CO2 exhaled is insignificant seems to be an elephant in the room of logical discussion. The tax on the other hand, has a complex psychology under-girding it’s legality, not the least of which is guilt.
Tell me again, oh wise one, why taxing CO2 is going to change anything?
The answer, grasshopper, is it makes the payer less wealthy (more vulnerable).
A poor citizenry is powerless.
Add CO2 to the list of conundrums this line of reasoning has produced.
The claim is “controlling” CO2 can “control” (or moderate, or influence) the climate.
Joe says never mind that, what about forest fires?
How effective are humans at stopping forest fires?
Joe says what about flooding?
Tell me again, oh government experts, how we “control” flooding?
What about an asteroid shower or planetary object striking the earth?
What about a huge (YUGE!) solar flare?
The see-saw sound of crickets is deafening.
Holy Hollywood, Batman!
Joe says check out Hawaii….. 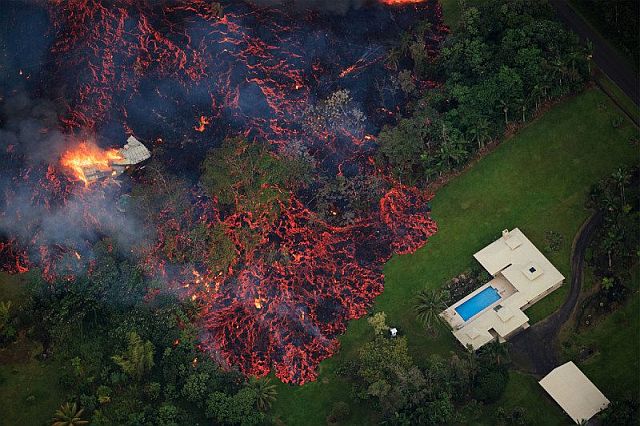 People in authority and people with no authority are pissing their pants as the active volcano in a small corner of the official Pacific Paradise® burps mildly and sets thousands running for solace.
So what are we saying?

Joe and I are saying the following:
We love that humanity reaches for the stars.  There is no limit imposed or recognized by us.  The human spirit, human imagination; they are powerful forces in this universe.
However…..  humanity is but a flea on a very large animal, said animal a mote in infinite space.
Take a spoonful of humility, humanity.  One step at a time.  How about letting science and technology establish the truth before you pirouette and add another tax to an overtaxed citizenry when there is no legitimate proof that the taxation will accomplish it’s objective.  In other words, separate politics from science.  And keep government the hell out of business.
Not only are politicians literally unaccountable for their poor choices and unintended consequence(s), their fantasy ideological excursions continue to punish the least able and least advantaged in our society – the poor and/or stupid.
The harridan lesbian harpy “leading” the Ontario government is a prime example.  We already have the law of the land that used to be based on English Common Law, whereby each citizen (the individual is the smallest minority) has all of the rights.  Each time the political class passes a law which identifies a group (other than the citizen) they weaken liberty, free speech, and justice.
Your opinion may differ.

Light in the Darkness?
Joe and I were delighted at the election results from Ontario.  Doug Ford is now the Premier of Ontario.  A picture of him and his wife, Karla – 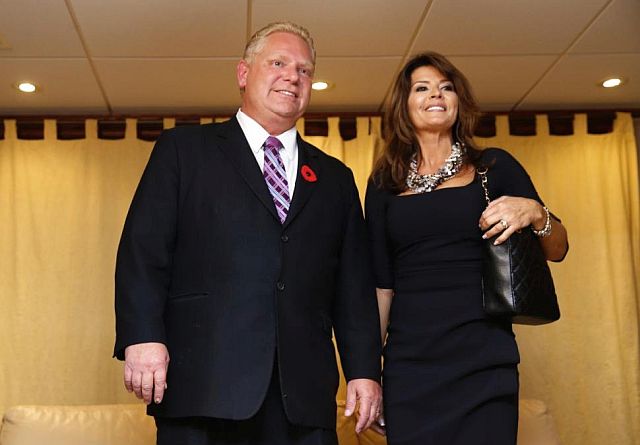 We were disgusted with some of the media reporting (referring to the new premier as “the brother of the crack cocaine user”).
Who says Canada’s media are fair and unbiased?  Time for a complete review of the so-called 4th Estate.  By 4th Estate we mean not just the press, but the bureaucracy, the education system, the “Deep State”, the “shadow government”.
Joe and I watched the political career of Rob Ford (RIP).  His tragic personal life was NOT his political manifestation.  On balance he did more good than not.
His brother Doug is different, but with similar roots.
We see a correlation to business acumen.  Politics may be kissing babies and worshiping ideology, but running a country is an economic quagmire.
We wish Premier Ford the best in correcting the havoc implemented via the extreme leftist agenda of the small “L” liberals under K. Wynne, manifested as unbearable energy costs, ridiculous carbon tax commitments, government intrusion in family life, and corrupting the education of Ontarian children.
A list of five platform items he would be wise to implement upon assuming office listed here.
There is a Ford in Ontario’s future.

The Death of NAFTA
Joe and I are old enough to remember the implementation of NAFTA.
For Joe and I and most Canadians, the net effect has been beneficial.
For others not so much.
For the Chinese, a literal gold mine.
Our fearless leader, Chief Rainbow Socks, and his side-kick, Foreign Minister Chrystia Freeman are pleading the case against tariffs in the USA.
To “sundance”, writing for The Conservative Tree House, NAFTA is all but dead.
Although Canada’s Mr. Dress(up) feels jilted, he does confess that Canada’s membership in NAFTA has opened the door for the Chinaman to take advantage of a loop-hole in the NAFTA agreement allowing foreign transshipment of items (such as steel) through Canada into the US market.  The article linked above has details.  Joe and I found the interview by Stuart Varney with Larry Kudlow informative:

Update:  We saw the Trump speech at the G7.  We also heard the snarky remarks from our feckless leader.
After the big guy in the room left.
Joe says it reminds him of an H.L. Menkin quote referring to democracy.
Joe’s modifications noted below:

“As democracy is perfected, the office of Prime Minister represents, more and more closely, the inner soul of the people. On some great and glorious day the plain folks of the land will reach their heart’s desire at last and 24 Sussex Drive will be adorned by a downright moron.”

The Onion (as metaphor)
One of the oldest metaphors has to do with the number of skins on an onion – each layer you peel off leads to another layer below.
As with solving problems or understanding complex systems, processes, or ideas, understanding is limited by personal capacity.  Consider the following cartoon – 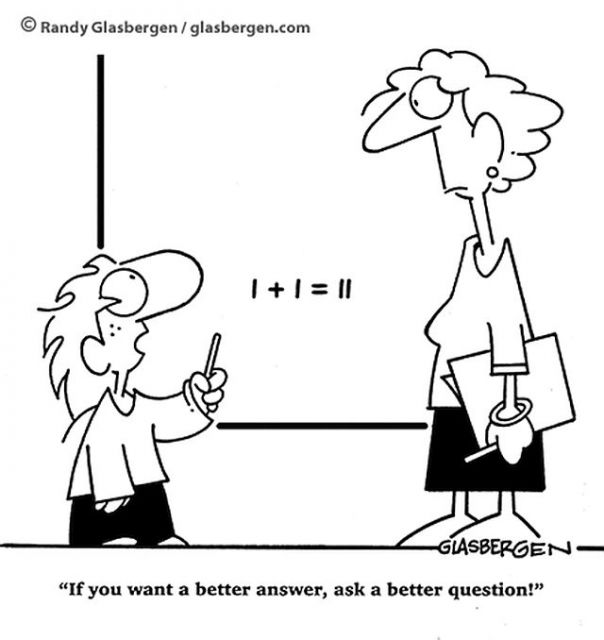 Joe and I agree with the young fellow.  In our computer workshops of yesteryear, we used a variant of this problem to make a legitimate point.  Here’s how we phrased it:
Q.  Which of the following expressions is correct?
1 + 1 = 2
1 + 1 = 10
A.  As written, both are correct (under certain conditions) but incomplete.

In passed weeks, the Sunday Sermon portion of this rant concerned itself with Dr. Jordan B. Peterson’s psychological analysis of the bible stories in the First Testament.  As with the onion layer metaphor, the bible stories can be understood at any number of levels; as a naif child might comprehend, or the most learned scholar analyze.
Joe and I learned from watching Dr. Peterson’s lectures that dismissing such an ancient and complex literary compilation as insignificant is at our peril.  The Bible was written by many; studied, edited, and argued for centuries by scholars and learned theologians and lay persons.  To ignore the Bible because you don’t believe in a white bearded man in the clouds is to not “skin the onion” until meaning is perceived.  The stories are as complex as you can understand, as old as people, and as valid today as in ancient times.  Don’t believe us, take a gander at Bible story art or Bible inspired art.  Here’s a link to Bible story art.
We are partial to this three panel painting by Hieronymus Bosch titled “Garden of Earthly Delights“, painted over 500 years ago (≅1515 AD) – 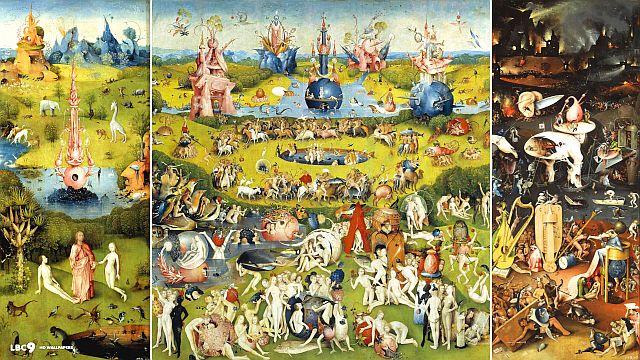 Here are a few details from these panels – 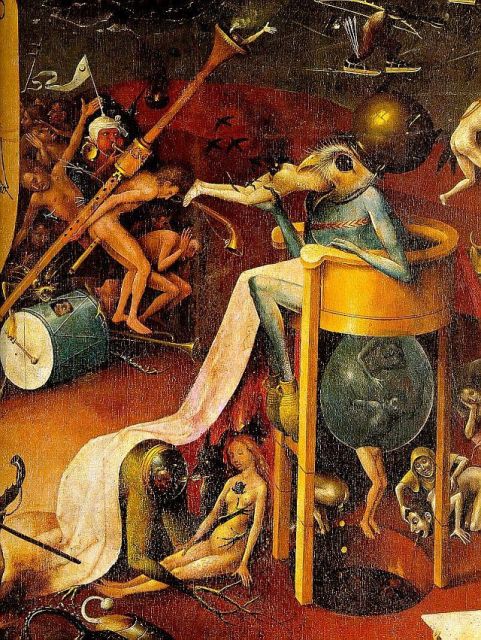 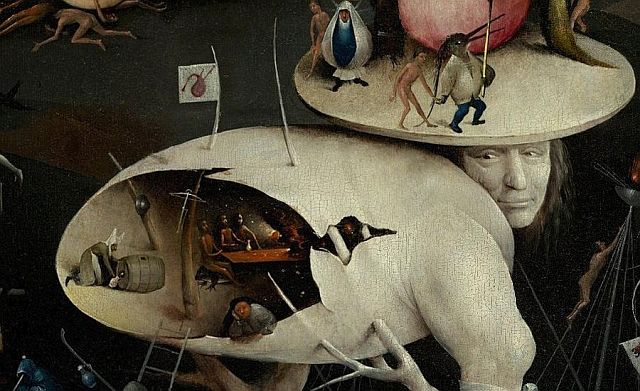 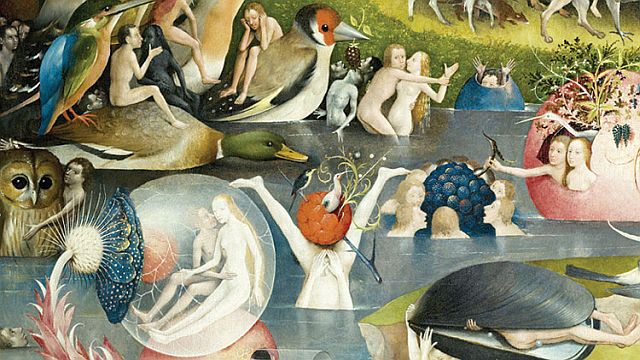 If this doesn’t make you think, or spur your interest, so be it.
We are gobsmacked.

World Population
Joe and I have used Hans Rosling TED talks in our former workshop presentations.  One of his most informative is the “Magic Washing Machine” talk.  Here it is from 2010:

Mr. Rosling has not been sitting idle.  There are many more videos available via the miracle known as the Internet.  We found the following presentation about world population and thought it very informative as well.  Here is Hans Rosling and “Religions and Babies” from 2012:

Joe and I believe the basic tenants of this presentation.  We have iterated them for years.  The path forward is cheap energy, educating women, and personal freedom.

Joe’s Garage
This is a film about the V8 Ford.
Henry Ford had built V8 motors for the Lincoln line, but they were conventional: the engine was cast in several pieces.
The competition by Chevrolet inspired Henry to design a V8 engine cast in one piece – an accomplishment many engineers swore was impossible.
This film combines mechanical and engineering detail with the social conditions of the time.  1932, the first year of the flathead V8, was still depression time economically in the US of A.  The promotional gimmicks and stunts to sell cars are part of this film’s charm. 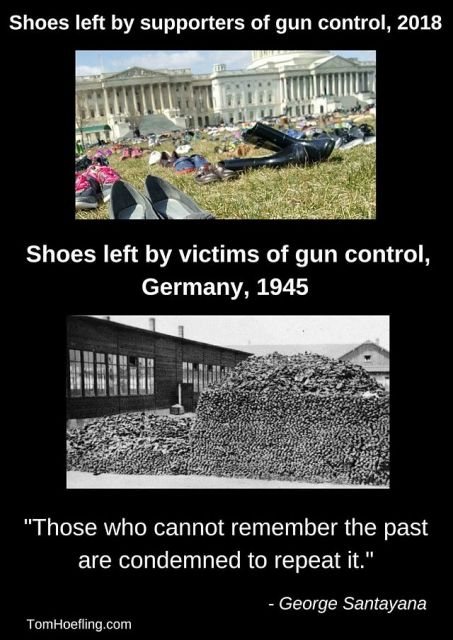 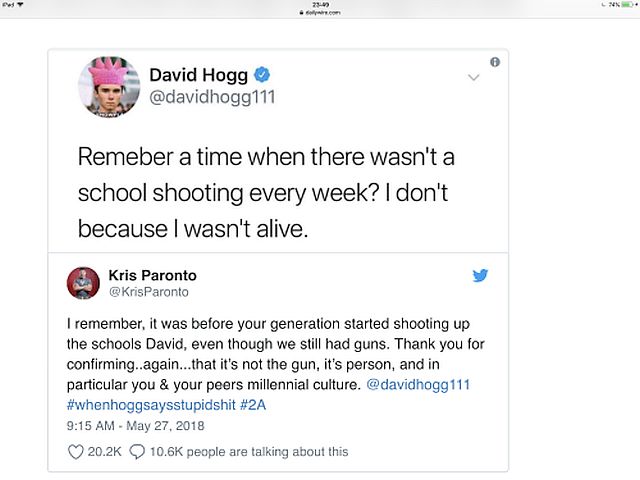 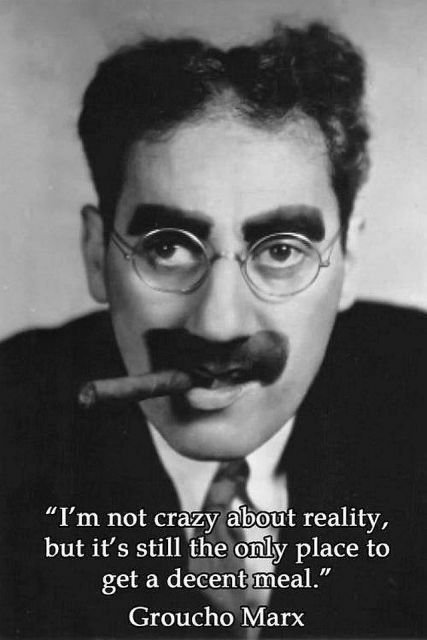 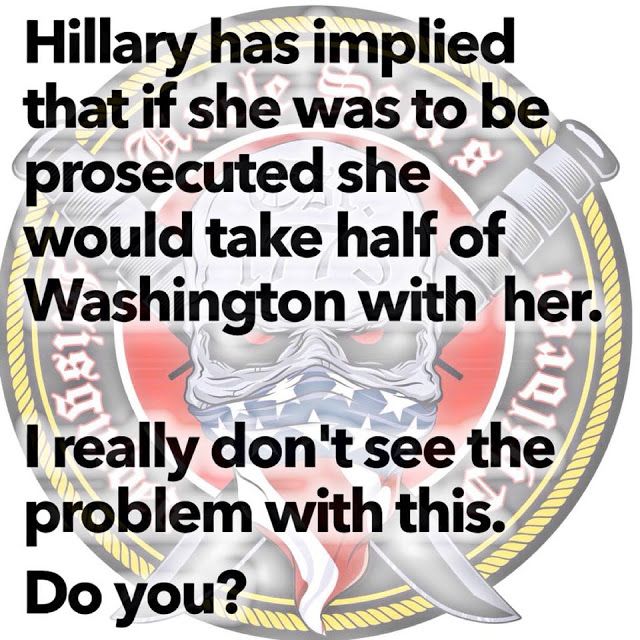 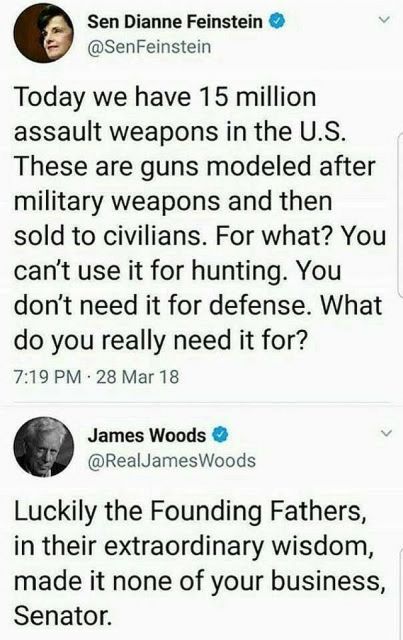 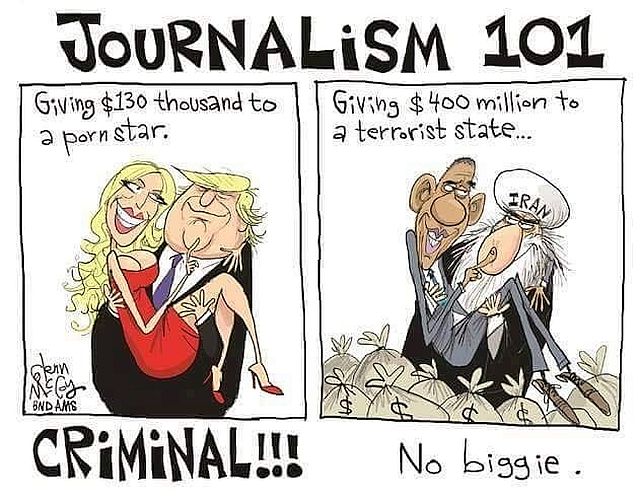 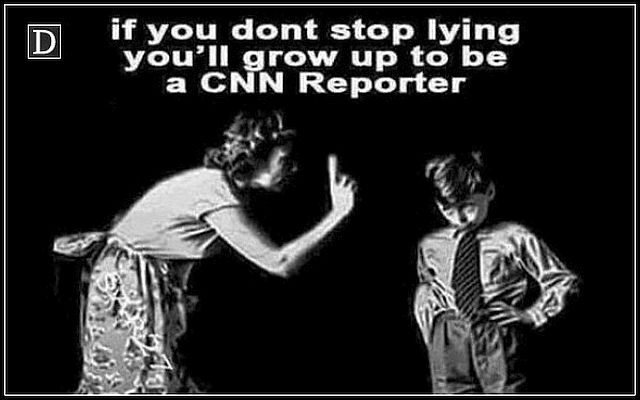 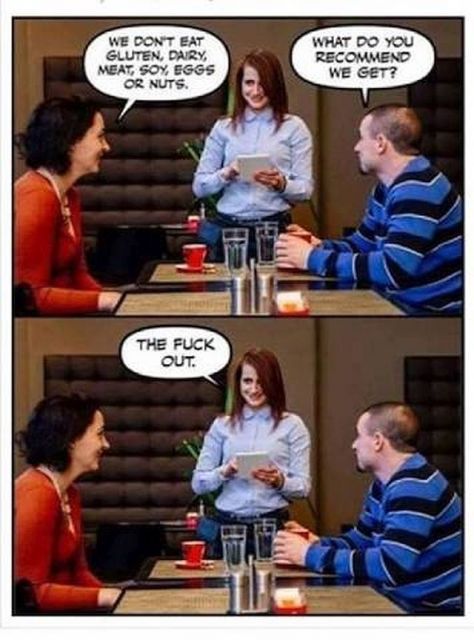 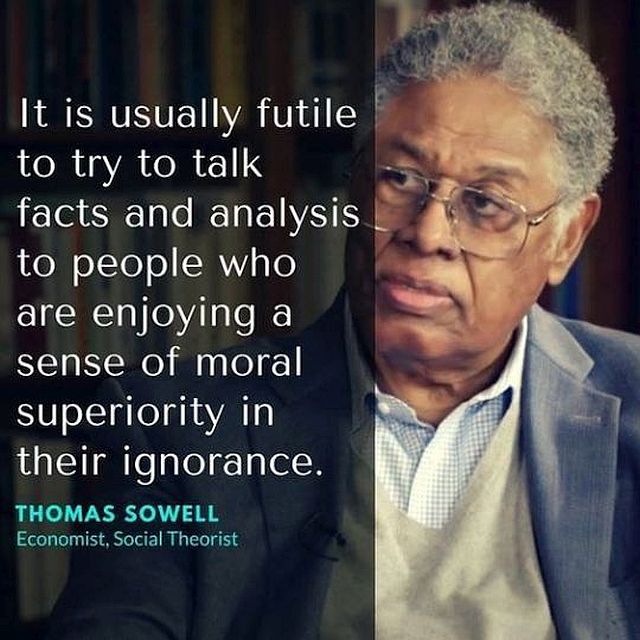 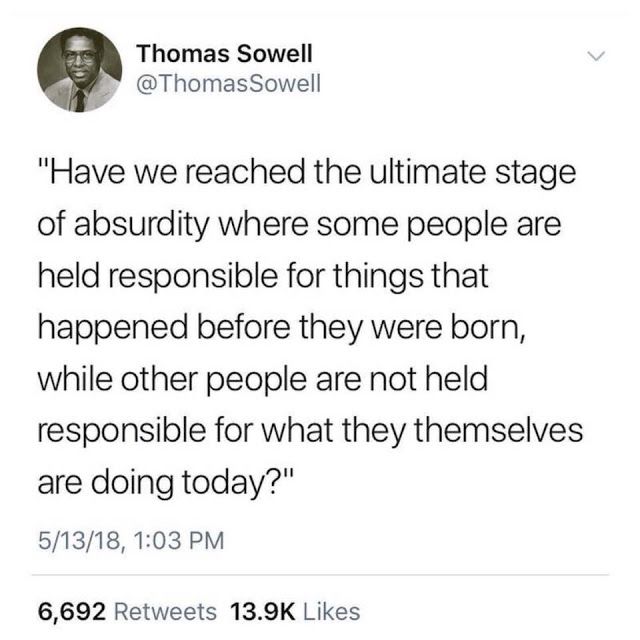 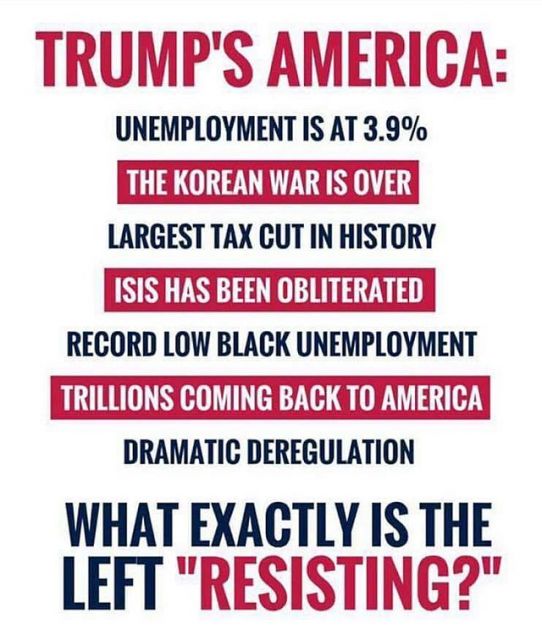 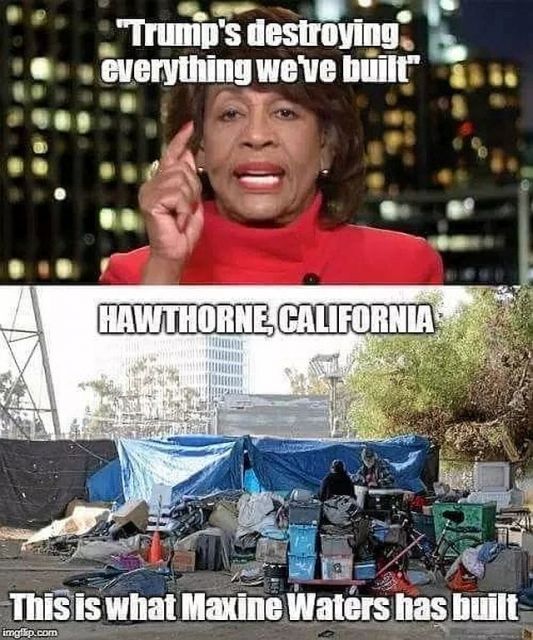 This week in Vernon started out just fine.
Then the mornings became progressively cooler.
The rain started.
The clouds came to stay.
Summer can’t be over yet – it isn’t the 21st of June!
If Joe was to use the CB radio, I’m sure the transmission would be something like….. “WTF?  Over…..” 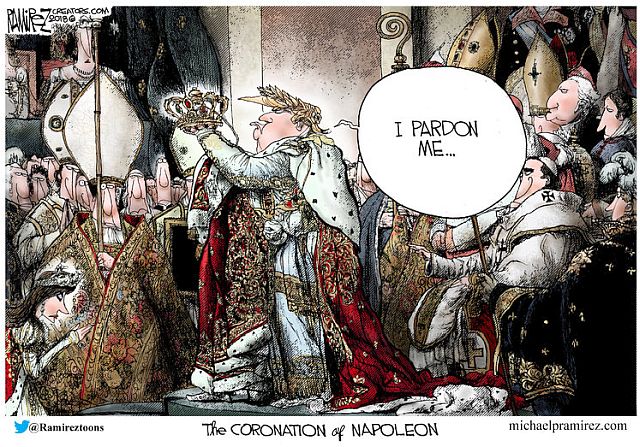 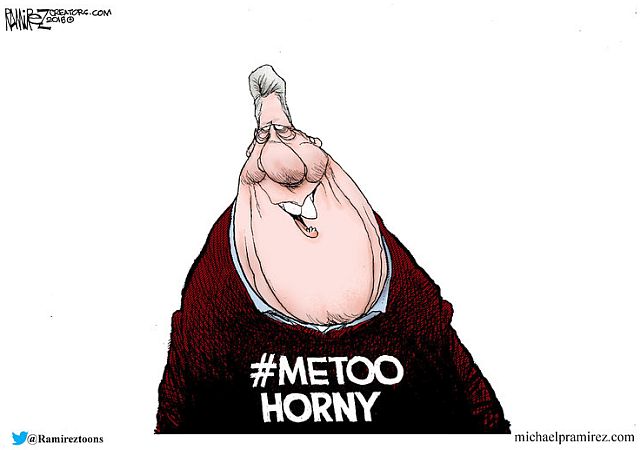 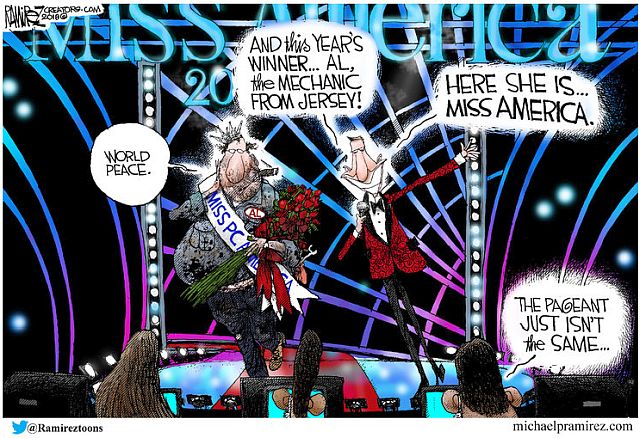 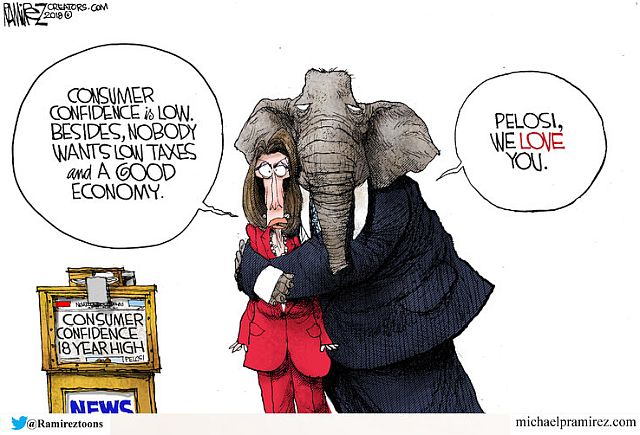 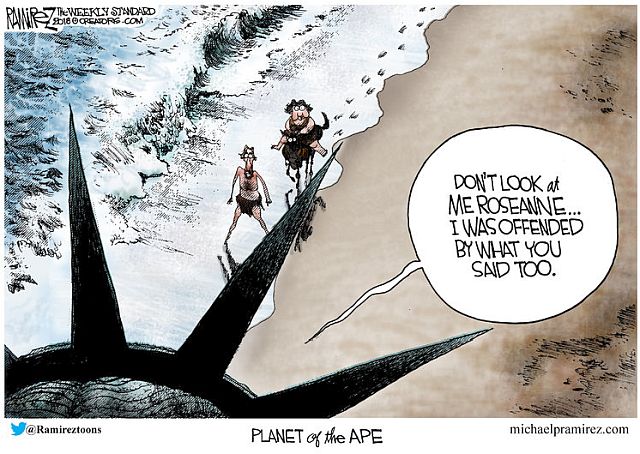 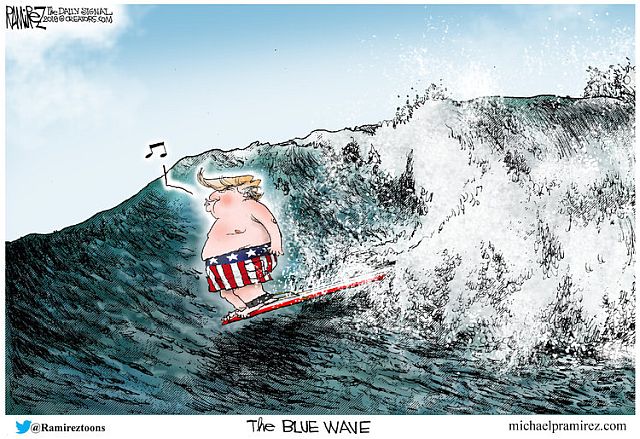 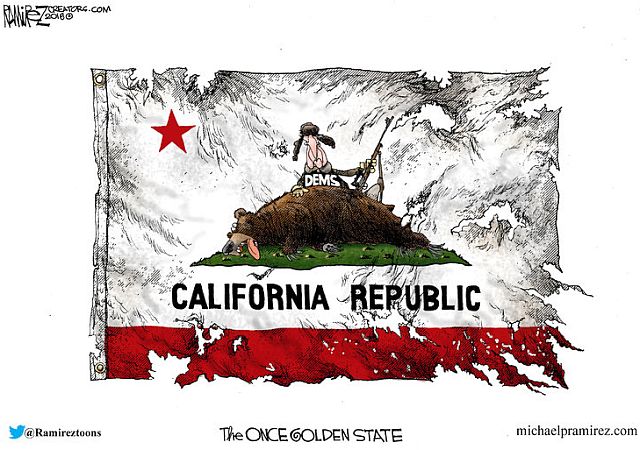