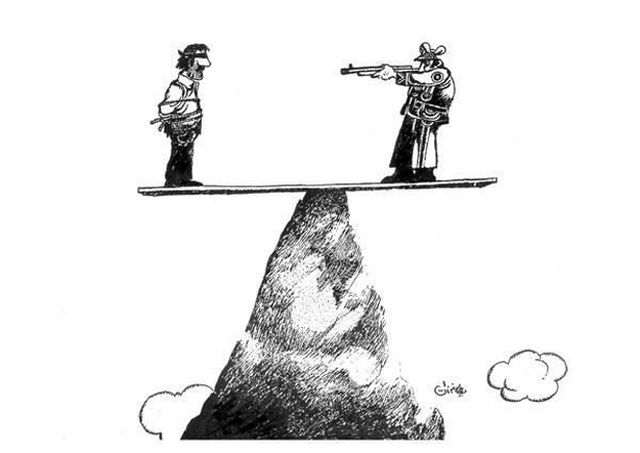 Joe’s Comment – The above cartoon by Ali Ferzat is a reflection on the situation in Syria.  Mr. Ferzat is a critic of the current President Bashar al-Assad administration.  The cartoon is an indictment of Syria’s absurd and self-defeating crackdown on its own people.
I think the cartoon is classic.  It captures in one frame the absurdity of single party fanaticism, of tyranny.
It also captures the philosophical debate that pitches freedom against civilization.
I am constantly at odds with some of the lunatics in my head, those who place freedom above all else.
They are pugnacious pugilists, constantly worrying my few remaining sane thinkers with their absurd dreams, dreams of no care, no worry, no problemo.
This week has been one of difficult choices, long hard days, and expenditures without hope of compensation.
Life as I know it….

Note: Joe and I were absent with excuse for 4 days this week.  A consequence is we had much less time for Internet stumbling, presentation watching, and formulating argument to allay our misgivings and distrust of the world around us.  This Sunday Rant reflects our limited time getting worked up and pissed off.  As a fact, we enjoyed our strenuous and tiring week.  We’d do it more often if it weren’t so damned expensive filthy lucre wise.  It is wonderful to have a purpose, no matter how fleeting.

Canadian Unicornism
Joe and I shake our heads in disbelief.
Another word perversion, another word thrown to the mob. another word that no longer means what it means.
It seems the party of Chief Rainbow Socks (aka Little Gay) has outdone itself with maximum lunacy AGAIN!!!
The effeminate little shit is banning (banning??? WTF???) 1500 types of “assault weapons”.
Specifically, assault rifles.
What, no word of assault celery, or assault pillows, or assault pliers?
That’s racist!
The word assault per the on line dictionary we refer to is thus:
noun
– a sudden, violent attack; onslaught: an assault on tradition.
– Law. an unlawful physical attack upon another; an attempt or offer to do violence to another, with or without battery, as by holding a stone or club in a threatening manner.
– Military. the stage of close combat in an attack.
– rape1.
verb (used with object)
– to make an assault upon; attack; assail.
Joe and I aren’t masters of the English language by any measure.
Heaven knows, we struggle to make ourselves understood.
So, kind reader, please help us understand the following expression – “assault rifle”.
To our way of thinking, the word “rifle” is a noun.
The word “assault” is used as a descriptor; for a noun that is usually an adjective, da?
The adjective of assault is “assaultable”.
Click the link and see.
Or is it some other way around?
Is “assault” a verb and “rifle” is a noun?
The reason we are confused is that there is no way a rifle can act on its own.
That’s a fact, Jack.
Another thought we have is in the peculiar noun definition above.  It is a type of act, a group or set of action(s) with a defined outcome.  Consequently, any physical item the entity intending said outcome chooses to use (or not – they could rely on their physical being alone i.e. fists, feet, words, voice, etc.) is incidental.  This doesn’t make sense.
Using the verb “assault” with the noun “rifle” doesn’t make any sense either.  In this sense, the action can be performed with any object (or not as listed above).  So when committing an assault with an object (be it a knife, a rolled up newspaper, a broken bottle, a Popsicle stick, a fist, a voice, a rifle, in the library with a candelabra) the object itself is being used in a specific manner with a desired outcome.  When was the last time you heard someone use the term “assault cheese burger”?  Yet do you deny that you could assault someone with a cheese burger?  Or a pencil?  A very sharp pencil driven into the temple of a person would be an “assault pencil” using this very loose categorization of a class of objects.
Joe and I may not understand, but we can obfuscate with the absolute best.
We think that the government is trying to ban certain weapons, but their definition is vague and unclear, as is their intent.
Consider the feckless leader – 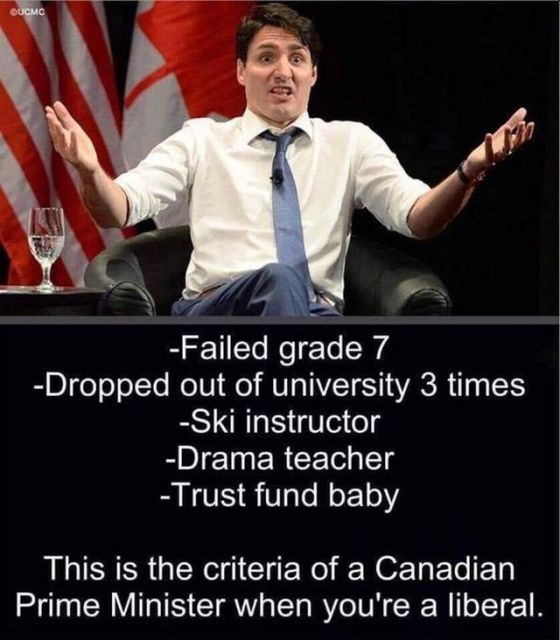 It is the wrong way, with the wrong words, with the wrong approach.
A “government trifecta” if you will.
This is something akin to the fiasco that happened with such words as “gay” and “organic” or the term “genetically modified organism (GMO) – strawman-ism or obfuscation or all of the above.
It is laziness like this that drives Joe around the corner to meet me in a bar.
And we haven’t even touched the subject of those who do not comply.
I don’t think Al Capone gave two turtle T’s what the government decreed.
But law abiding folks do.
Joe and I oppose this lunacy.
We covet some weapons.  We haven’t been able to afford a real live 1911 service pistol in 45 ACP.  Nor can we afford a Henry rifle.  Which obviates the acquisition of Claymore mines (M18).  We have a design for a Claymore Vest to be worn in the most critical situations…. just make sure your arms aren’t in front when you make it go bang.
The real issue remains unanswered: does a Canadian citizen have the right to protect the lives of family, friends, and self?  Do they have the right to protect their property?
Joe and I say we do.
A marriage made in sanity.

Joe’s Garage
Task: Rescue Ava
Ava is our motor home.
At one time we planned to drive to Belize, jack up our motor home, take off the wheels, and wait for Godot.
Didn’t work out that way.
Last year we thought we sold Ava on a handshake and promise.
Unfortunately, 10 months later, we were forced to repossess Ava.
This week, daughter Kenda came with us to Kitimat to bring Ava home.
Ava suffered a hard winter, abandoned with no care or maintenance.
Her roof was burdened by 6 feet of heavy snow and the roof caved, the interior was flooded.
The story of the trip and recovery next Sunday Rant. 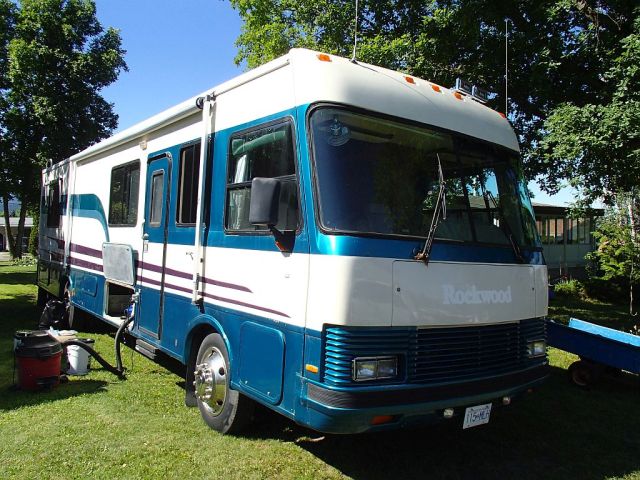 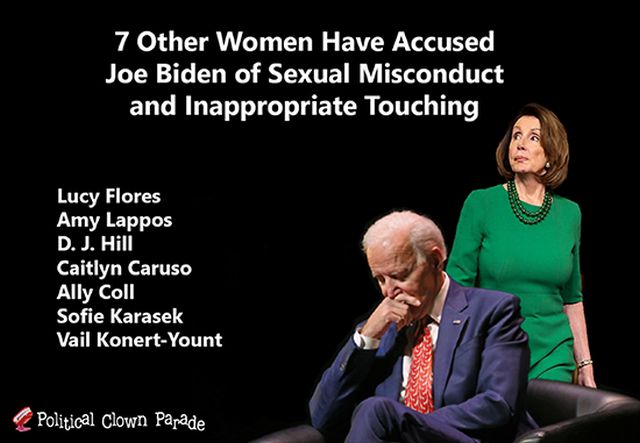 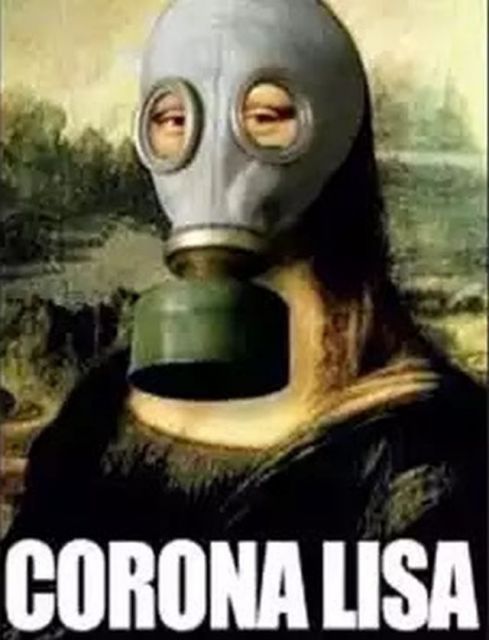 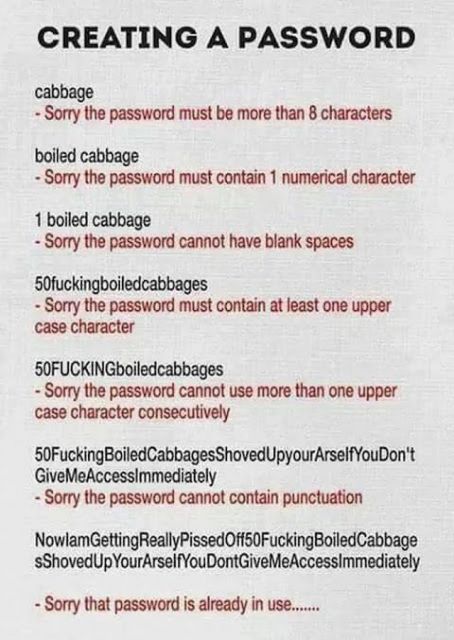 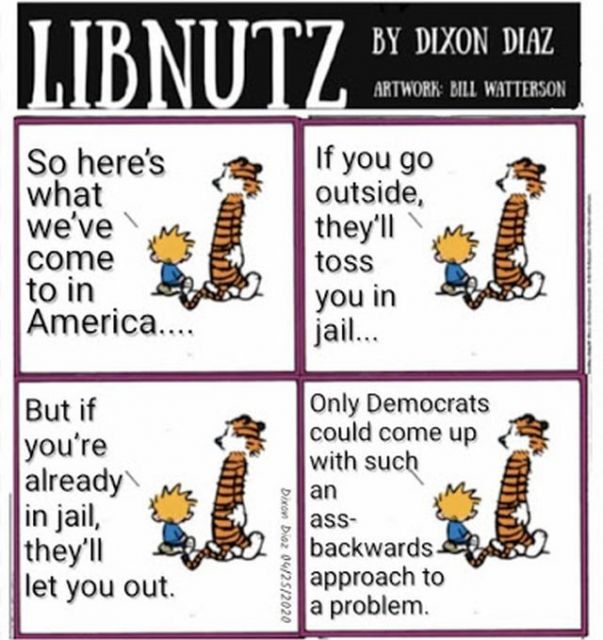 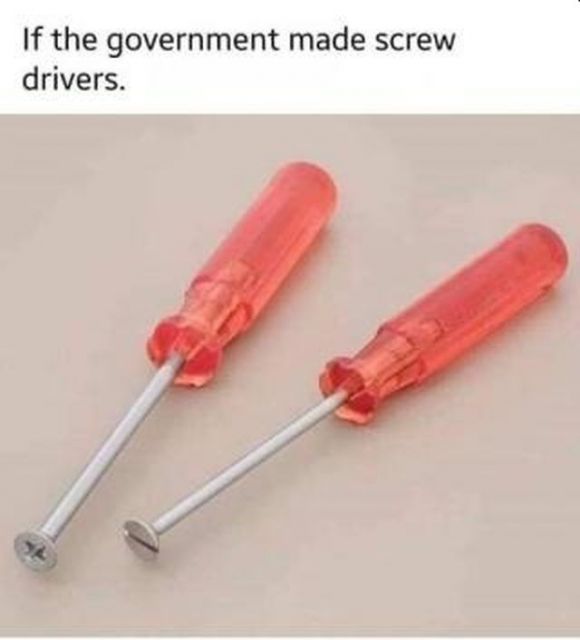 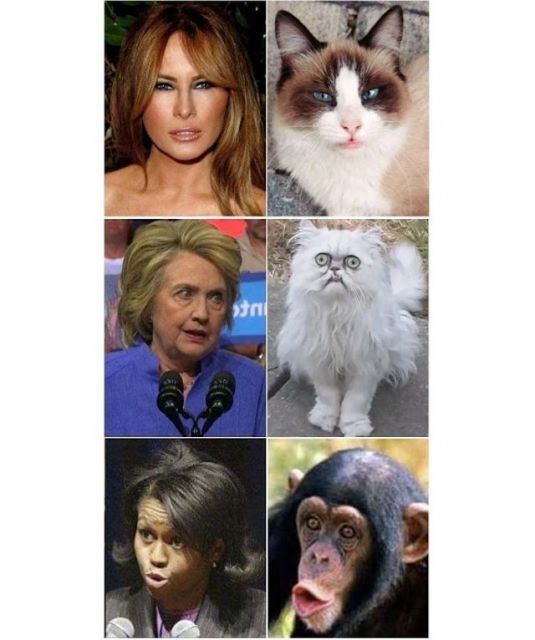 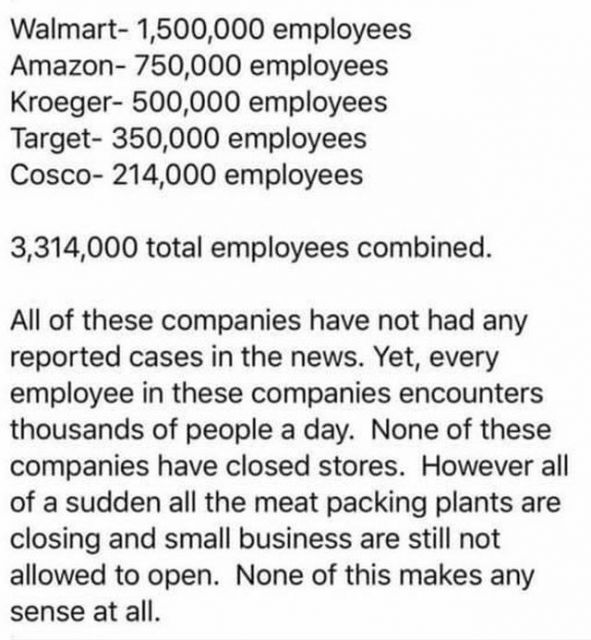 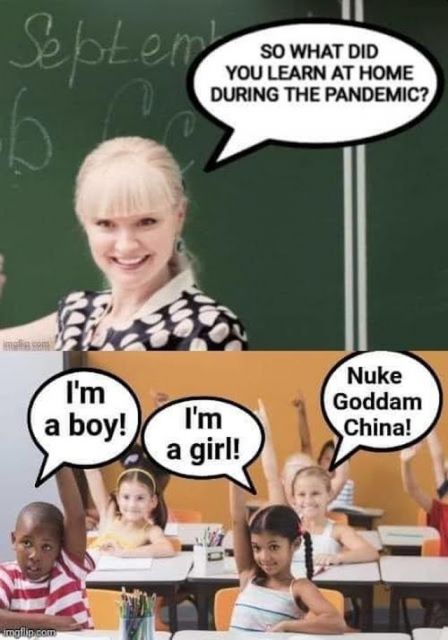 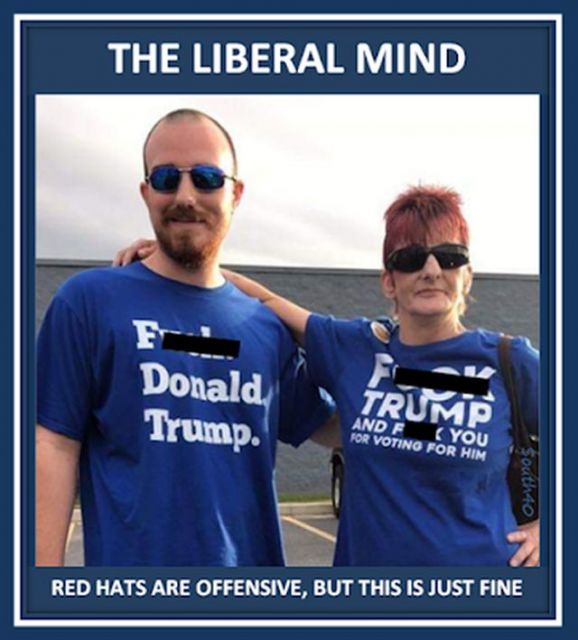 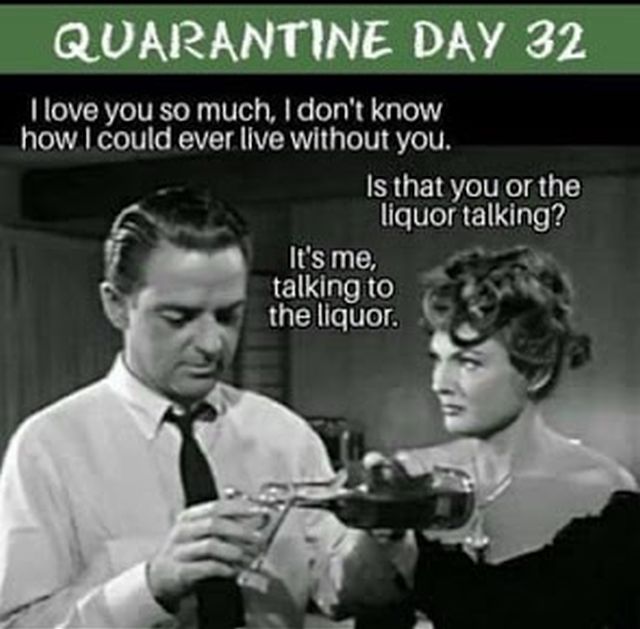 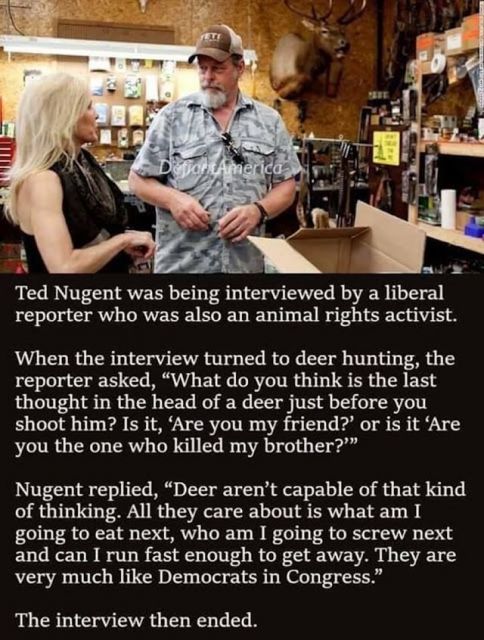 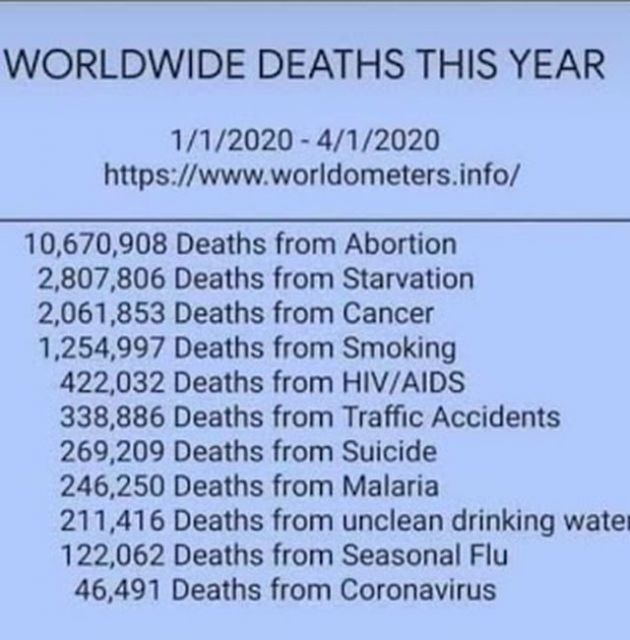 Joe and I are not even close to knowing the history of the world, the history of the West, the history of history.
That’s why we listen to great historians.
This week’s sermon is not.  That is, it is a discussion.
Eric Metaxis interviews our top fave historian, Victor Davis Hanson.
The scary part is his analysis of the Chinese Communist Party strategy for destroying the Western nations, the Western economy.
This is very frightening to Joe and I for we have been bloviating in previous rants about how Donald Trump has called the Chinese out.
VDH suspects that China feels its back against the wall.  They have done something heinous that the entire world can see.  They will now seek allies for a showdown.
Joe and I know how to fly an airplane.
We volunteer.
Somewhere in our 37 personality skull, our version of Sargent Rock is squatting in a fox hole, damp unlit stogy butt clenched in his teeth, a scowl on his unshaven mug; waiting for the signal:

This week in Vernon BC we weren’t here from Wednesday to Saturday.
The early week was gray and cool for this time of year.
Saturday night heap big rain.
Sunday p.m. the sun came out to say howdy!
An uncharacteristically chilly Spring so far.
The furnace is still (!!!) cutting in at night and a few times a day.
I was wondering if they are taking immigrants in Bora Bora.
Joe says he won’t go with, ’cause there ain’t no Ford trucks to play with in Bora Bora.
The damned French have a different word for everything….. 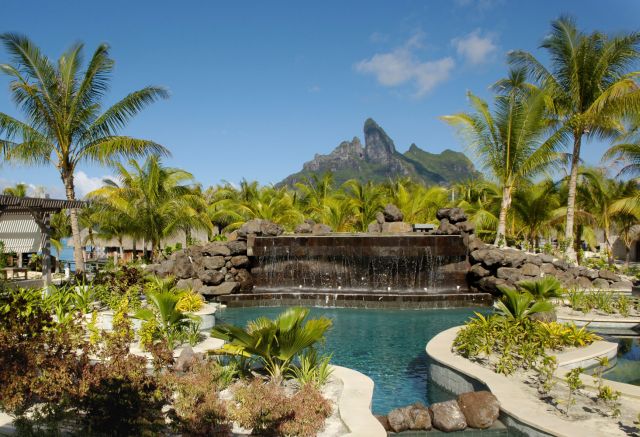 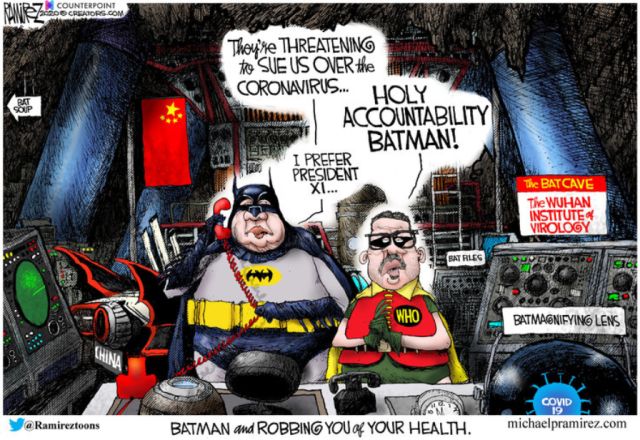 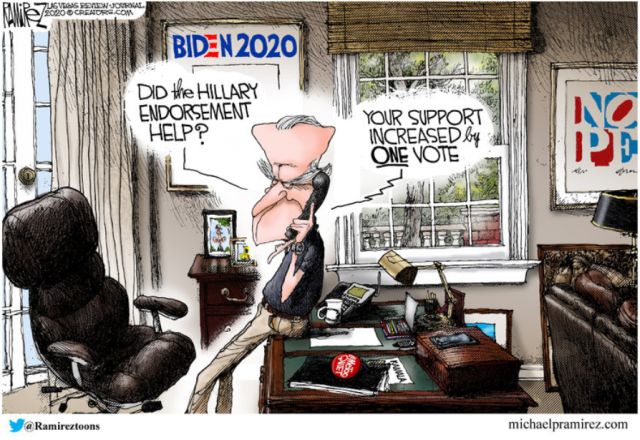 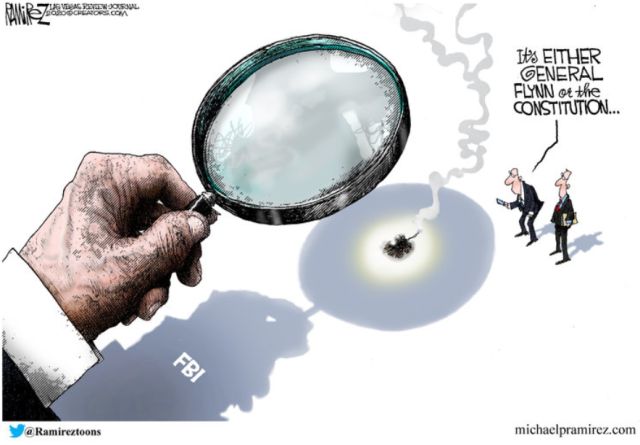 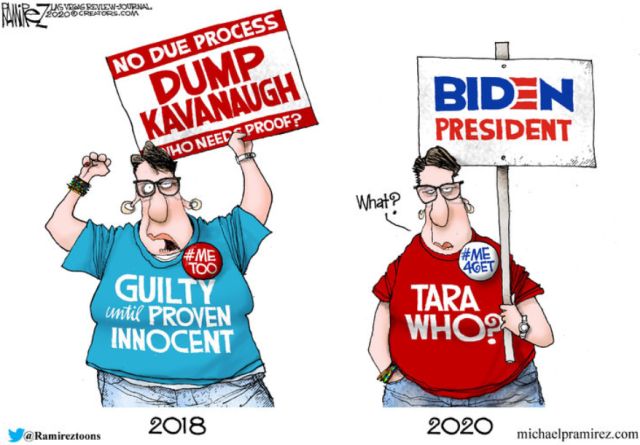 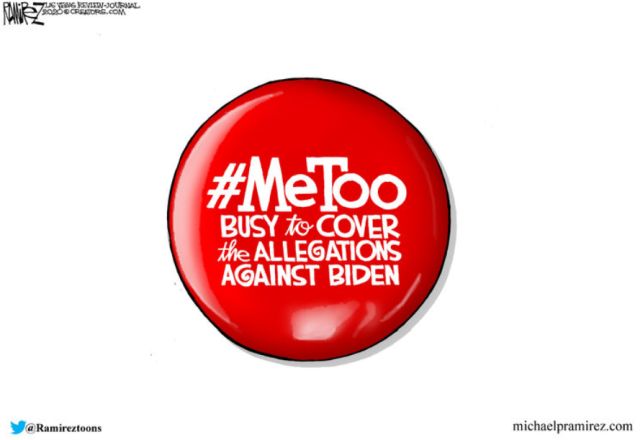 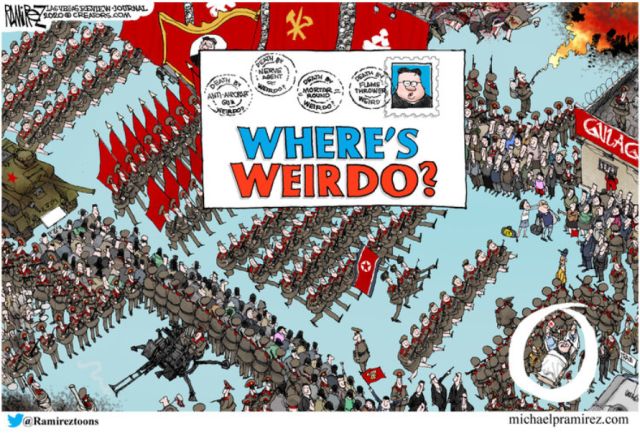