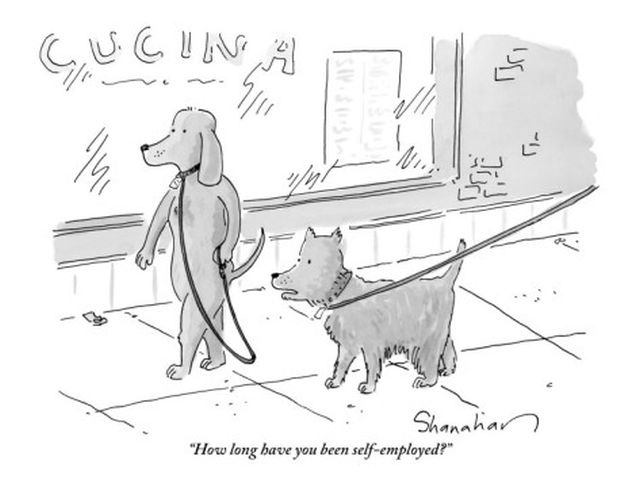 Joe’s Comment – This is one of Danny Shanahan’s milder cartoons.
I love the simplicity.
I have been “retired” since February of 2002.   I often joke that the bastard I work for now is demanding, petulant, obsessive-compulsive, never satisfied, and won’t stop for coffee or lunch.  Much the way I like it!

Exclusion (Where’s Our Share?)
Joe and I have maintained that Canada is just the “mini-me” of the good old U.S. of A.
We continue to entertain that belief.
(White) Canadians are brothers (and sisters, damn it!) of the (white) Americans, who were separated long ago in a bitter divorce.
When asked who they wished to live with, then came the divide.
Q.  So, (Joe asks) if our (twin) societies were separated at birth, where is our share (approximately 1.10% per population ratio) of the Muslim wackjobs infesting the States?
A.  Well, (I explain) it is there, it is happening, but the press / government / cops suppress the information.  Much like Europe.
Joe and I live a blissful existence in Vernon BC Canada, far away from the madding crowd.
So we thought.
Little did we know that as close (in proximity) as Vancouver BC and as recently in time as March and April, Langara College suffered a “mini-me” attack by a deranged adherent of “The Religion of Peace®”.
His name is Nasradin Abdusamad Ali.
He was arraigned in provincial court on April 5th for bombing the college.
Thank doG he was incompetent – an evacuation was necessary when two of the three incendiary devices exploded, but there were no serious injuries to people or infrastructure.
He has previous criminal charges.
No “mainstream media” coverage.
Very little anystream coverage.
The progressive left / Marxist post modernist / big heart, big control, small think folks are saying wait a minute Charlie there ain’t no Allāhu akbar stuff here, it is just a mentally unstable 23 year old from Surrey.
Joe says right!  That 23 year old just happens to fit in like a turd in a punch bowl.
The extreme right (misnamed – they are also a leftist bunch) are shouting quackydoodle deport them all no Shariah burn in Hell.
Joe says right!  Again.  Let’s just have our regular Canadian wackjobs acting out violently, exclusively in Canada, and let them foreigners duke it out in their own patch of Heaven, far away from here.
Not even a unique event: many more on our soil just not in our “news”.
All part of the wonderful Canadian mosaic says Joe.
Ho-hum.
From the website “TheReligionofPeace” the statistics keep mounting.
Since 9/11 there have been 34,870 deadly terror attacks by those truly.
Here is a graphic of the March, 2019 statistics – 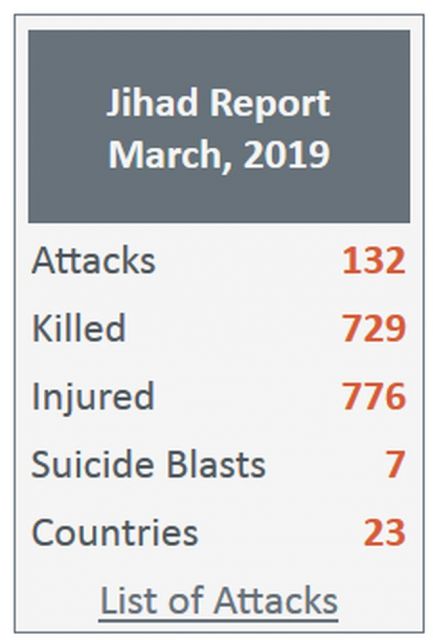 The “List of Attacks” is a link.  You can see the details and supporting evidence.
Joe quickly scanned the entire list of attacks (132) and observed that there was one attack in The Netherlands (4 dead 2 injured), and one attack in Israel (2 dead 1 injured).
The West (yes, we include Israel as a Western culture despite their large Arab minority population) does a better job of keeping track of the wackjob element, but it is impossible in time, resources, and manpower to catch them all.
Joe and I have lost our rose colored glasses.
There is much tragedy ahead.
To the dead and injured it simply doesn’t matter if it was a mentally imbalanced person (?) or a Jihadi warrior of the true faith, or both.  They are dead or injured no matter the root cause.
To the living, we say this:
You can stick your head in the sand.
You can stick your head up your ass.
Same result (except for smell).
On the other hand…..
The number 1 is only “the same” as the number 6 in the sense that it is a number.
They are not equal in any other sense / value.
Islam is only “the same” as Christianity or Judaism in the sense that is called a “religion”.
They are not equal in any other sense / value.
Mixing oil and water only works for salad dressing.
We hope this makes clear the issue at hand.
You are welcome.
Y’all come back now, hear? 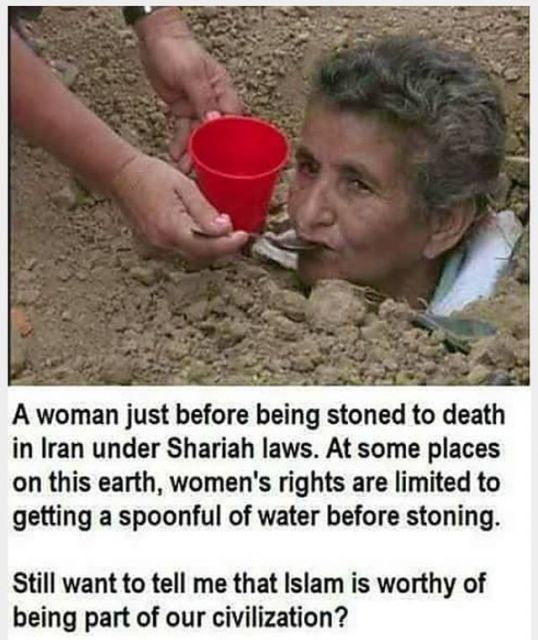 Socialist Dreams
Joe and I found this analysis by Dan Mitchell helpful in addressing the question: what is Socialism in reality?
He begins by asking, of the 162 nations on this list (below), which ones are “Socialist”?

You will have to view the list at the link above.  For some damn reason I couldn’t scale the image to the page…..  I am NOT a WordPress fan today.  I’ve been trying for about an hour…..
The point Mr. Mitchell is making is Socialism has an inverse relation to economic freedom and to GDP.
Furthermore, there is no real working definition of Socialism.
Further furthermore, there is no clear demarcation of “free trade” in any country – it is a wonderful theoretical ideology that just don’t exist in its purest form.
Here is a short video where Mr. Mitchell connects the dots:

Tax Envy
Joe and I have lived too long since retiring in 2002 (at the tender age of 53 years, 11 months).
The excellent adventure of Canadian politicians paying for promises with fiat currency has decimated our pension.
What was once 100% is now less than 70%.
We watched the following video and wondered, truly, where is the Canadian equivalent.
We might have to get a job!:

Joe’s Garage
The End of the Dinosaurs
A man named Robert DePalma believes he has found a location that was created mere hours after the asteroid impact that ended the Cretaceous Period.
The Hell Creek Formation in North Dakota is the lode-stone of fossils that literally were live animals and plants shortly after the asteroid struck.
The curious fact (to date) is that no fossilized dinosaur remains have been found after the “K-T” event.
Paleontologist Robert DePalma believes he has found proof of a catastrophic end to the age of dinosaurs.
An incredible find:

A lengthy article here by Douglas Preston for the New Yorker. 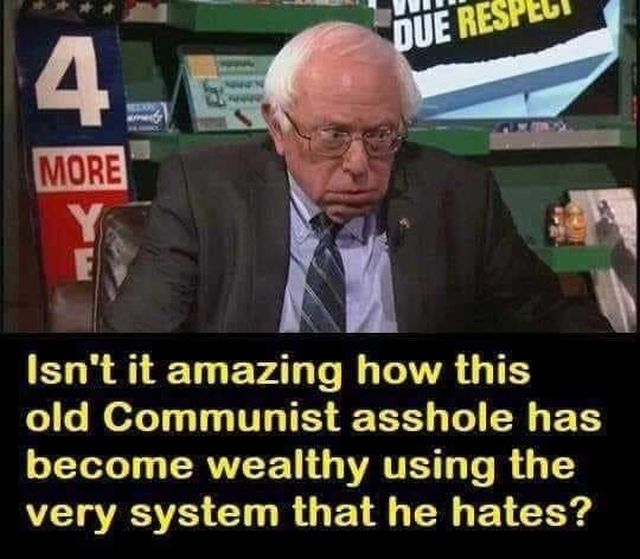 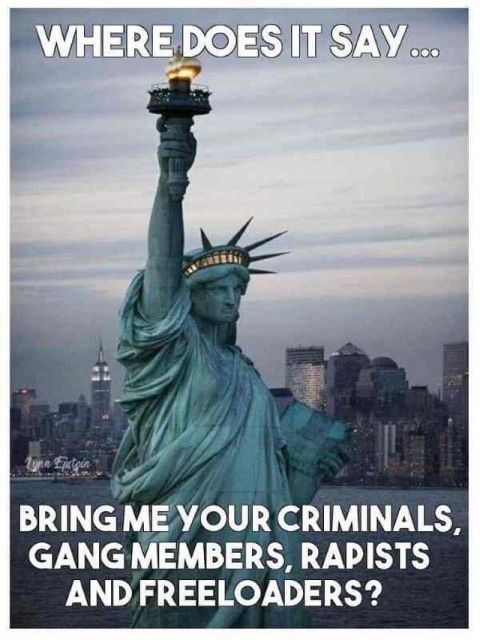 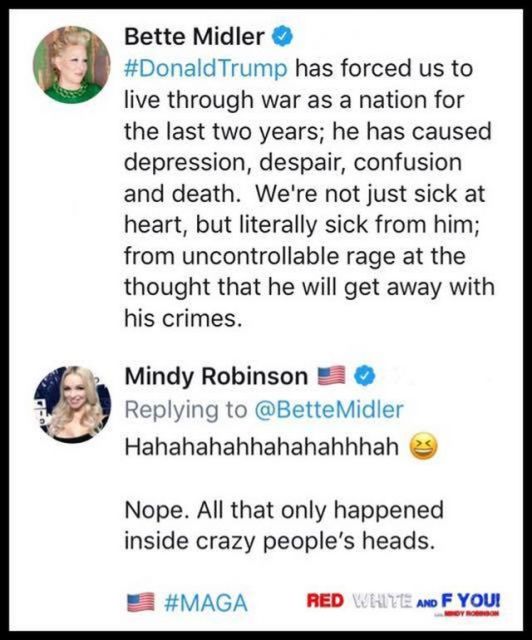 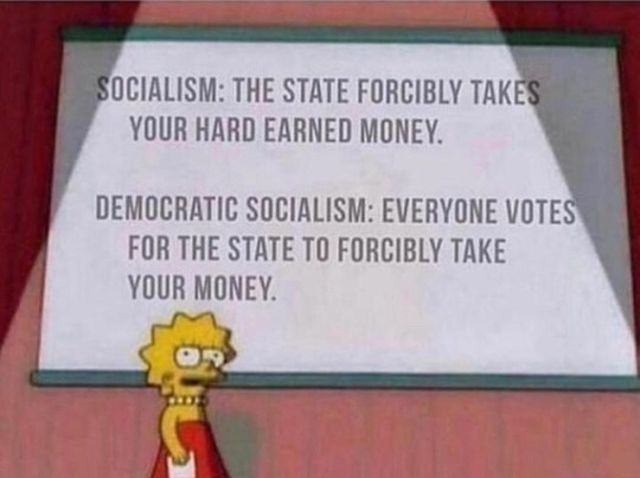 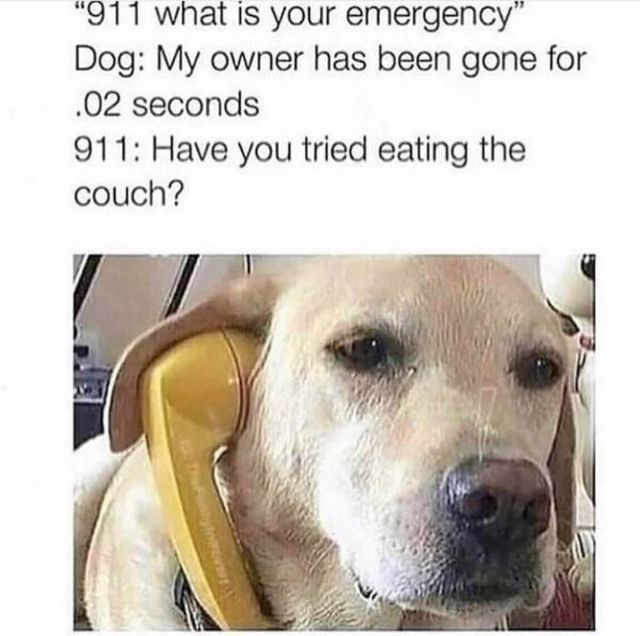 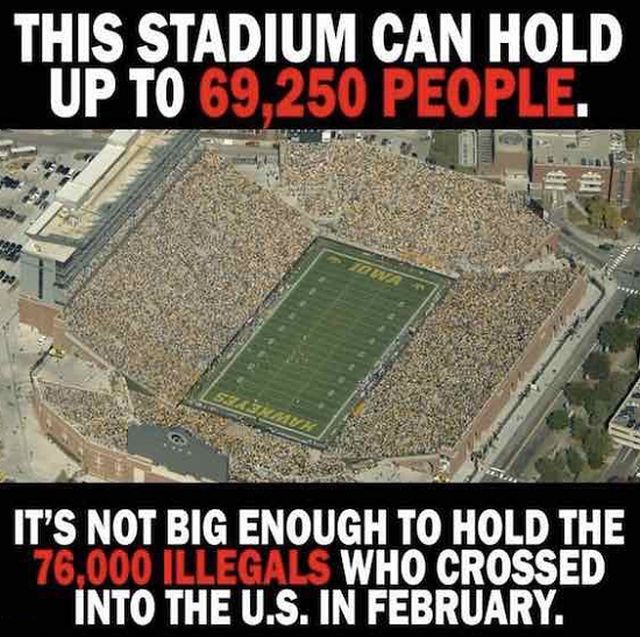 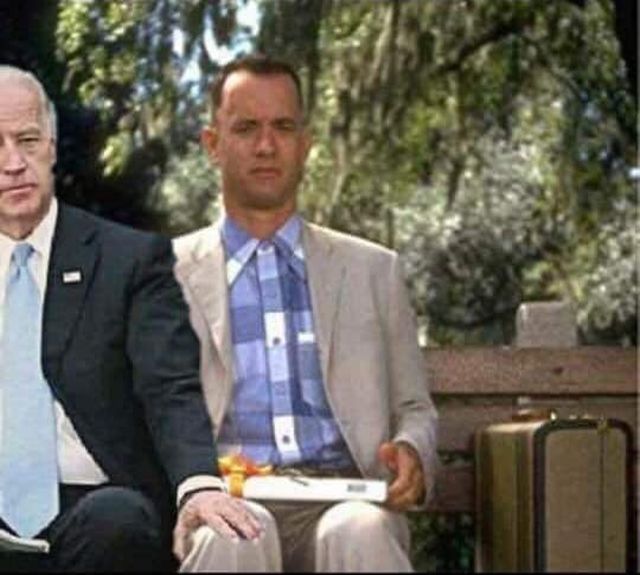 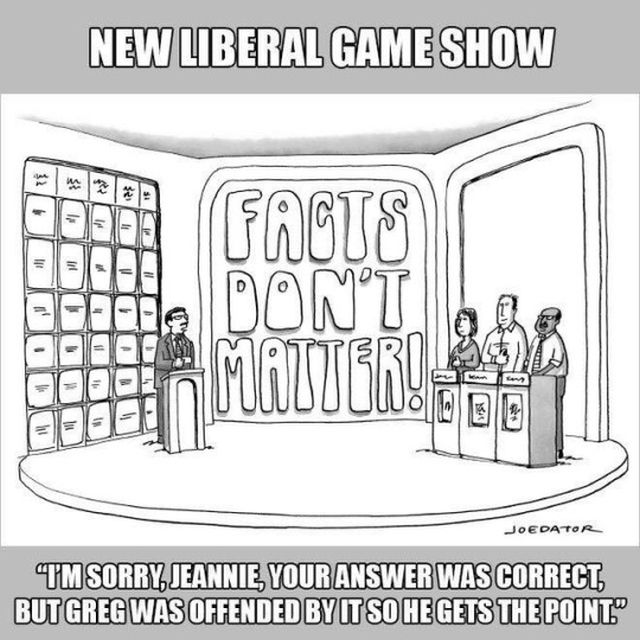 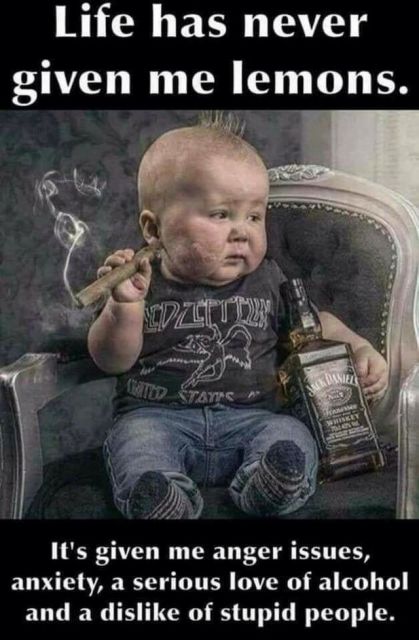 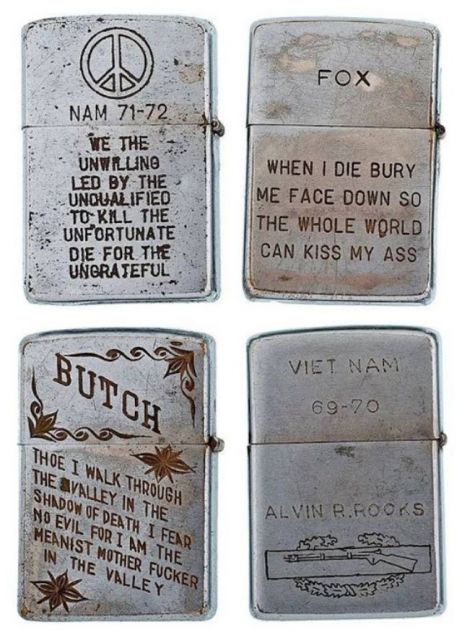 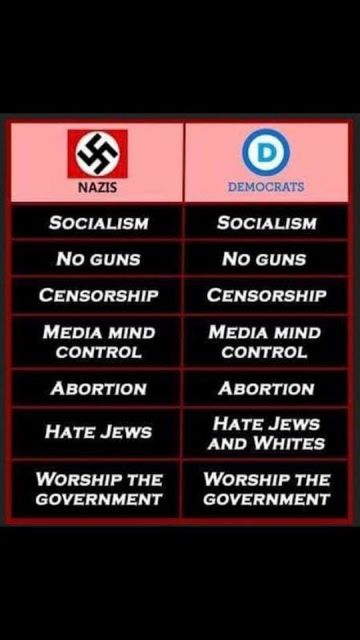 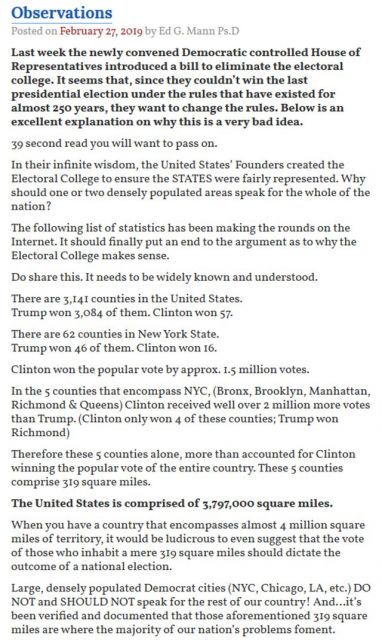 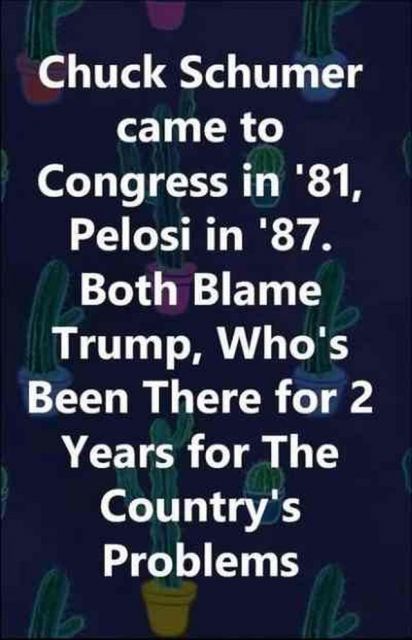 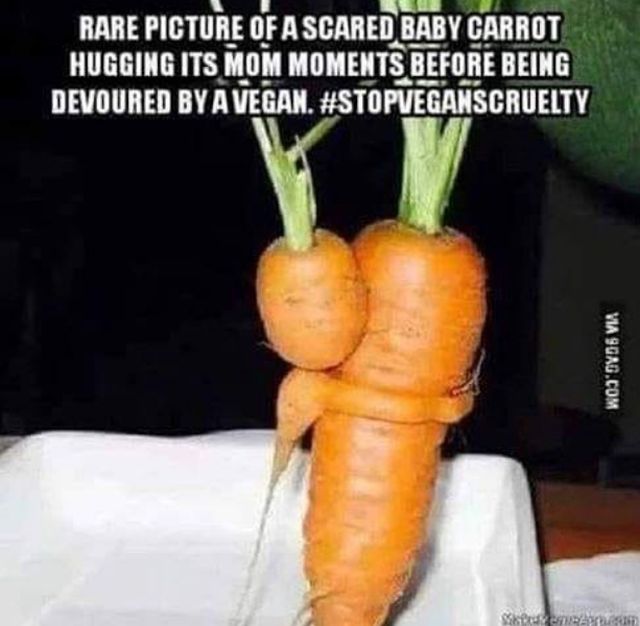 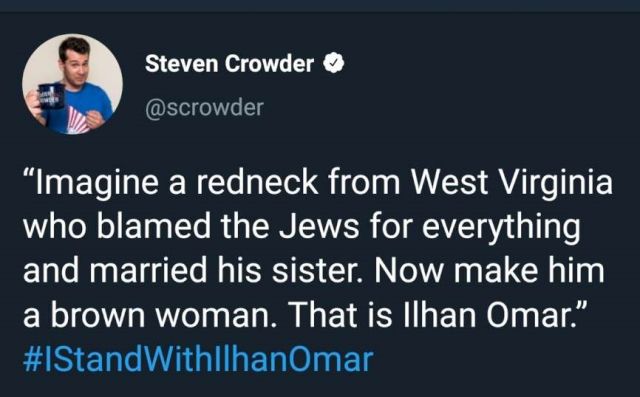 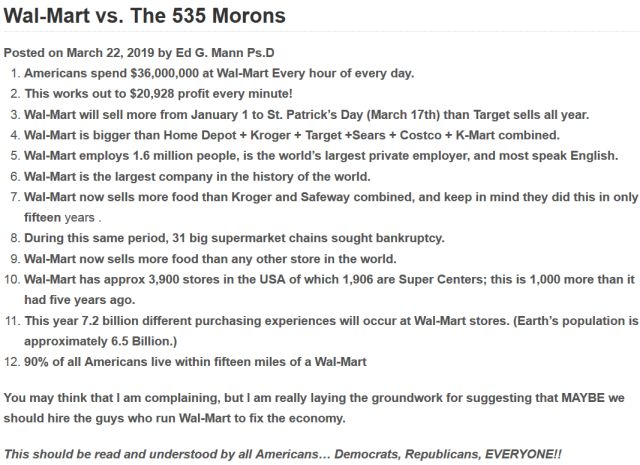 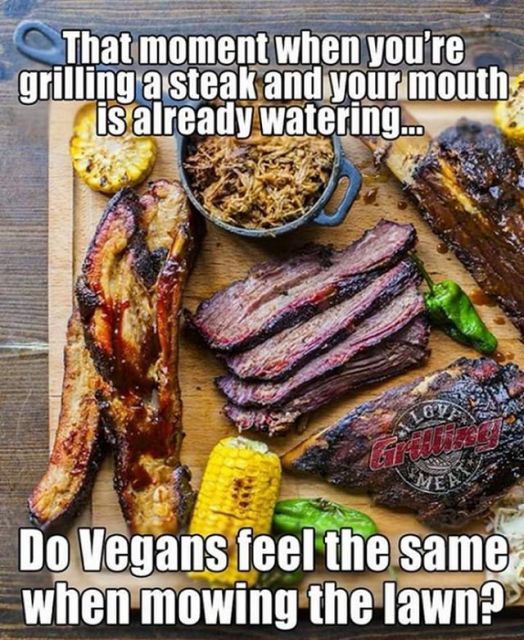 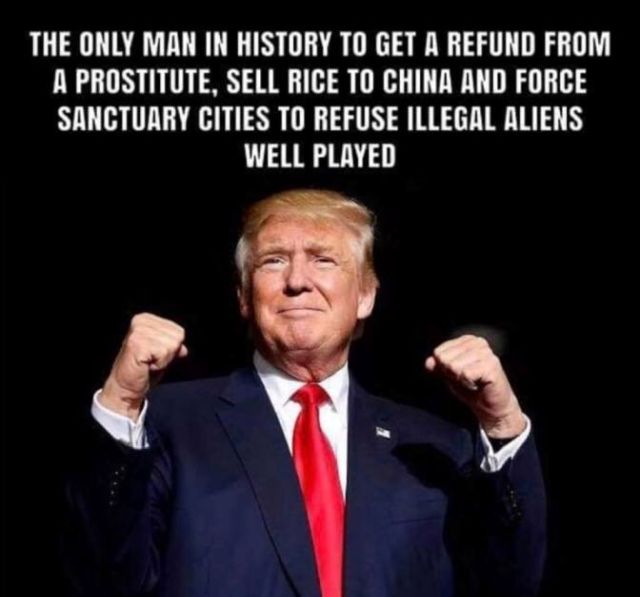 This week’s sermon is a treat.
Andrew Klavan is a humorist, author, moralist, and deep thinker.
Mr. Klavan takes one hour to question the sanity of the culture we in the North American version of Judeo-Christian society are surrounded by every day.
Delivered with humor, humility, and a deadly sharp moral perspective:

This week in Vernon BC has been fine Spring© weather.
Teeny tiny rain.
Lots of sun.
Lots of cloud.
Still cold enough at night and the early morning that the furnace cycles.
Joe says it is officially Spring©, ’cause the snow, when we get some, is the clear runny version.
Only 6 months ’til freeze up.
Gotta get busy! 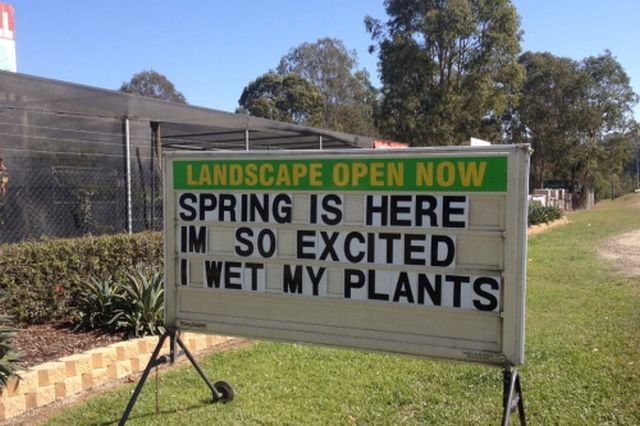 Joe (trying hard) Mekanic
p.s.  Ramirez is not a plant – 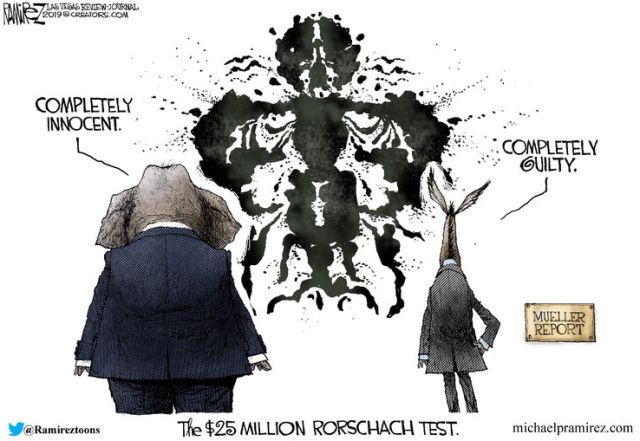 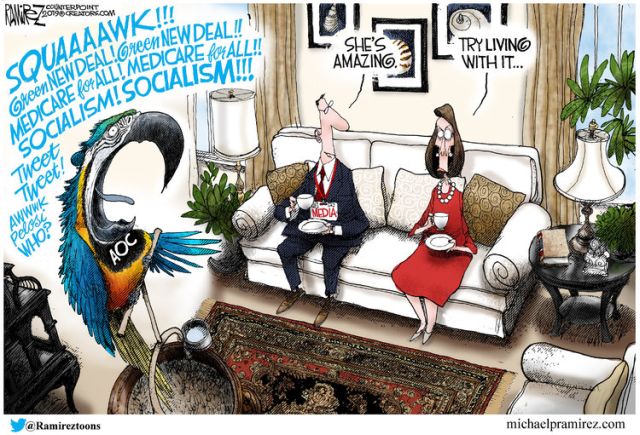 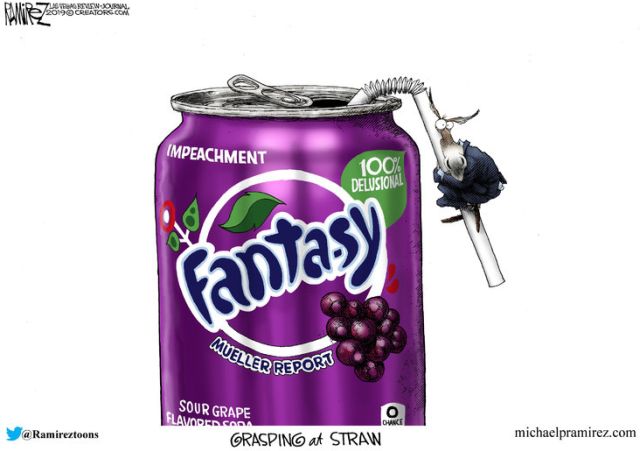 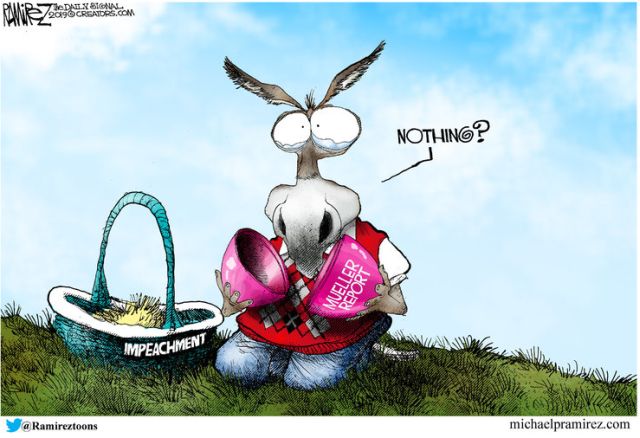 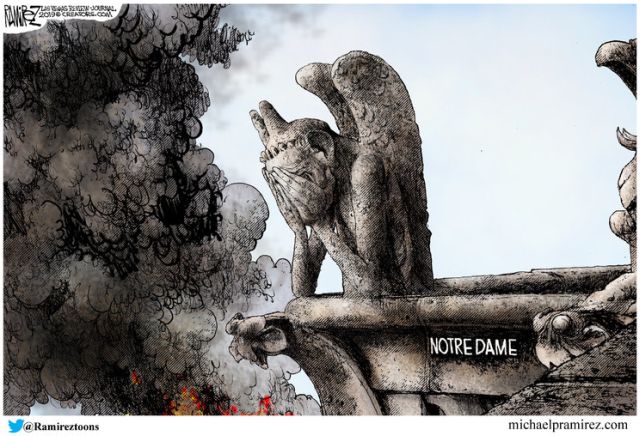 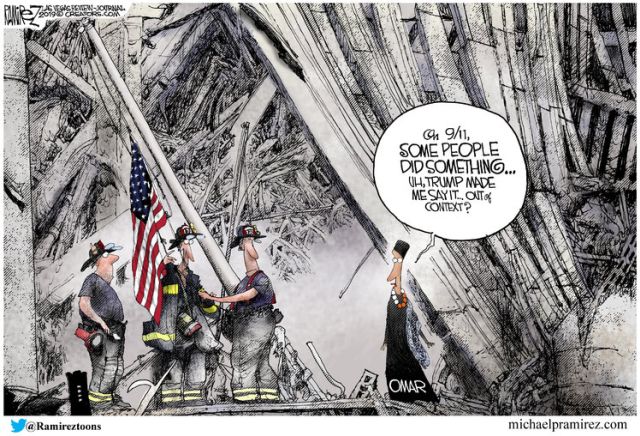