Hump Day is known as Wednesday.

If you are at all interested in the culture you live in (politics is part of it), and you live in Canada (as most of you do), why not put your ideas, beliefs, understanding(s) (dare I say prejudices?), under scrutiny to see if they are, indeed, valid? Valid enough to be the foundation underpinning your life? Or, is it possible, that you are living the life of a “Cargo Cultist”, with a limited weltanshauung. Not familiar with cargo cults? It’s when an advanced technology / culture meets a primitive technology / culture, and the resulting remnants that precipitate from the reaction. I say it is a two way street:

Is that too threatening a concept? Implying we all have elements of “Cargo Cult-ism”? Here’s some preamble on the way to getting to the point. Mr. Tangent at your service. Anyone who knows me knows “that’s the way I roll” (wherever in the world that expression came from).

I am an ex TELUS employee. For better or worse, that is where I spent my earning years, doing something I was good at doing, and felt productive about doing. It wasn’t for the money (what a cliche). My truth.

Whenever I can use TELUS to provide a service I require or want, I do. Certainly not for the “support”, although I know many, many fine people who do their best in spite of TELUS corporate direction. I sign on because of loyalty and, perhaps, a mistaken and misplaced belief that I was part of and continue to support a business that is world class capable. Not, as a co-worker once lamented in a moment of frustration, “leaders at the trailing edge of technology”.

The above preamble to lend gravitas to this statement: I was preparing to leave TELUS services because they did not offer Sun TV News.

Hold them hosses, podner! Why would I give two mouse turds about one channel out of so many? Good question, Tonto. Let me answer by asking this question: in a semi competitive multi-media world where I can watch damn near anything under the sun that humans or nature does (from pornography to Al jazeera to sports, to traitors like David Suzuki and Michael Moore, to soap operas and “reality” shows, to Natural Geographic and public tv, et cetera), why would there be a hue and cry from Canada’s so-called “intelligentsia” to prohibit the broadcast of Sun TV News? What is so disturbing to the haloed minds of Canadian academia that makes them froth at the mouth in their frenzy to “protect” the minds of we humble hoi polloi?

When Sun TV began broadcasting, it was on TELUS satellite but was removed in May of this year (TELUS satellite is a re-branding of Bell). Bell owns a competing “news” program and network i.e. CTV. / CTV News.

After several phone calls to voice my displeasure with no satisfactory rebuttal from TELUS, I was prepared to move to Shaw.

I wasn’t alone. Enough concerned folks must have complained. Sun TV News is now on TELUS satellite (506), and Fox News is 507. Why do I care? Let me present two arguments, the first of which is from The Who. From the concert for New York (October 20, 2001), the raw, passionate, heart and mind of our Western culture:

Is it a coincidence that the last note played in this performance is at exactly 9:11? The corollary statement is “how can you NOT get fooled if you don’t have all the facts?”.

(if the above is too frantic, here’s the tamed down studio version: [youtube http://youtube.com/w/?v=SHhrZgojY1Q] – either way, it’s the lyric I’m trying to exploit)

Here’s how viewing a debate from another perspective is delivered at Sun TV News:

You may not like Michael Coren or Peter Brimelow or Vdare.com (I like them all). And, this isn’t an isolated interview, by the way. Do yourself a favor and watch their opinion broadcasters for a few days instead of the regular source you use. That is, if you bother with news at all…. The major point I’m trying to get across isn’t that Sun TV News is better, or more factual, or interesting (my personal beliefs aside). The point is we are supposedly living in a free enterprise capitalist Western democracy (a bunch of fancy words that I question). Free speech and human rights are the soup de jour. Stop telling me what I can and cannot see, or hear. Don’t inform me what my opinion must be. A quote from Cathy Shaidle:” You’re not smart enough to tell me how to live” is echoed by a chorus of “Amen!”. I know only what I know. I still believe (despite much evidence to the contrary) that most people can formulate a rational conclusion if given enough facts to understand any situation. I encourage everyone to adopt the Missourian motto: “Show me!”. ref.: http://en.wikipedia.org/wiki/Missouri

Question: Where would you ever, ever, see a discussion like this anywhere else in Canada, including the holy institutes of higher learning?
Answer: In any community between individuals in that community, and on Sun TV.

Here is another example, regarding the absolute shame of the “Indian Industry” in Canada. This is Ezra Levant doing what he does best:

Same story us regular schleps on the ground hear from our neighbors, friends, and co-workers. If you know any “First Nations” people well enough it is what they say, too. The Emperor’s New Clothes indeed.

One of the greatest concerns in this new age dawning (monitorial democracy) is dealing with the immense amount of data streaming at us every day. What sort of filter will bring you facts? Unresolved. The medium which brings the information can be used to illuminate or obfuscate. To think there aren’t people willing to use any means to attain their objectives is world class naivety.

How to cope? Unresolved, with exceptions.

Another fascinating article about the dichotomy most people support – that humanity is not connected to the “real” world of “nature”. That because humans are cognizant, the natural laws can be ignored. There is an old adage that states “We are born wet, naked, and hungry. Then things get worse.” Read about expectations here:

Speaking of Nature, and natural law, here’s a short video from MIT. They have built a camera that can capture the image of particles / waves traveling at the speed of light:

As an arrogant white male in a Western culture (harrumph!), I am not surprised to know that some smart sonovabitches have used the immense horsepower of Western thought to do such a thing.

What is noteworthy (other than the absolute brilliance of the accomplishment) is the presenters of the above video are decidedly not arrogant white males. It pleasures me to say they are, however, arrogant. Gotta love it…..

Here is one of the best speeches from a GOP candidate I’ve heard to date. The “debates” are a farce. The “modulator” from any of the MSM is a farce squared. Newt Gingrich is one smart man, who has a depth of knowledge about the history and political mechanics of the greatest nation on earth unequaled on the GOP roster. This speech was given to the Republican Jewish Coalition. The link takes you to the PJTV web page. Look for a video entitled “Gingrich @ RJC: Obama Ignoring Anti-Semitism” on the right side of the page:

Here at 617 Decosmos Road, I take pains to document annual snowfall. By doing so, the overwhelming reaction I have to snow and cold is amplified. Like writing 100 times on the blackboard “I will like snow and cold because I am a good Canadian”. For you Jake, I present my record to date for the fall of 2011: there have been 13 discrete snowfalls, with a total of 14 inches deposited. Due to mild weather, there is only about 3 inches remaining. The frost hasn’t entered the ground. So far, so mild. However, official winter begins in 4 days. Here is a picture showing the skiff of snow delivered on the 16th in perspective –

My form of record keeping calls anything under 1″ a “skiff”. Several skiffs equal an inch. Stay tuned for the entire report due in April (it should be done by then).

Wage war against political correctness. Say “Merry Christmas” whenever you can. Let the chips fall where they may. Hat tip to whomever sent me this one: 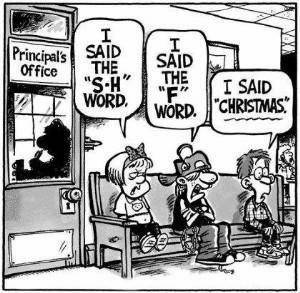 Time for political and other cartoons. There are lots to choose from –

If you are not familiar with Christopher Hitchens you might want to take a look in YouTube for some of his ascorbic, dry wit in debating whatever the debate-de-jour might be. He was a staunch atheist – author of the best selling “God Is Not Great”. Here is a remembrance from Rabbi David Wolpe:

Here is Christopher Hitchens speaking in Canada in 2006 about free speech. An excerpt from a longer speech:

This is about “first principles” and is well worth the listen. Definitely sagacious. You might remember the Danish cartoon atrocity. Here is another clip of Hitchens disemboweling the argument of a (so called) Muslim:

I for one will miss the Hitchens perspective.

Time is a thief. Seems to me just yesterday a bunch of young fellows were drinking beer and laughing in the Okanagan summer sun. Now it’s time to share my all time favorite Santa cartoon –

Of course, if I had my druthers……

From (non) sunny (not) downtown Vernon BC, MERRY CHRISTMAS to you and your families.