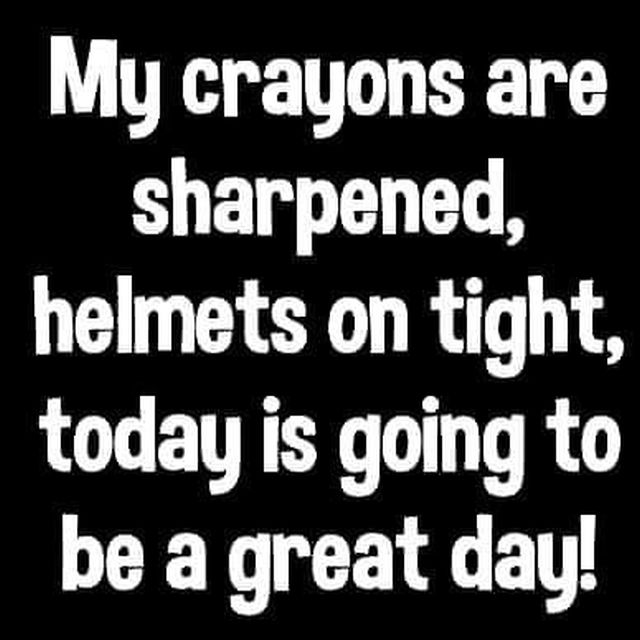 Joe’s Comment – It is amazing what a sunny day can do for me.  All day has been a giant relief.  Shirt off, working outside, almost breaking a sweat….. getting things accomplished was a bonus!  I’m not catching up with work missed in the first four months of the year, but the current work is under control.
I reckon more sunny days will improve my attitude, my health, my outlook, and my productivity.
Now to knuckle down and get things done…..

Quick Dick McDick
Saskatchewan’s (and Canada’s) ambassador, QDMcD, has another video on the topic of cattle.
This episode stars QDMcD and also QDMcD as they discuss the impact raising cows has on personal life and business bottom line:

The Biden Fiasco
Currently, the U.S. of A. is being “managed” by behind the scenes operatives.
Shades of “Wizard of Oz”.
The President, referred to irreverently by many derisive terms/nicknames, is clearly not a mental giant or particularly cogent.
Anyone who argues contrary is oblivious of the hundreds of examples from a very long and undistinguished “career” whereby “Lunchbox Joe” has been milking the system for half a century.
Behavior is a solid indicator of character, wouldn’t you agree?
How has Mr. Biden’s behavior as a politician flavored his public recognition?
Some of the names for the President that we found particularly creative and cruel:
–  Sponge Brain Poopy Pants
–  Drooler-In-Chief
–  The (p)Resident
–  Emperor Poopy Pants the First
–  The Puppet-in-Chief
–  Joe Dementia
–  Chief Kidsmeller
–  Pant Shitter the First
You get the drift.  Any sign of weakness, gaff, or failure is amplified then broadcast.
Talking smack as the athletes do.
Joe Mekanic and I think there is an equivalency in Canada with our feckless leader, but we digress.
The Democrat Party is in deep trouble:
–  Inflation induced by reckless Fiat wealth generation, unsupported by actual wealth, only by momentum and inertia.
–  Biden family peccadilloes – Hunter’s laptop, the Ukraine bribery, Joe’s semi-pedo inclinations, Joe’s general gaffery, ad infinitum.
–  The COVID fiasco at all levels by all authorities, government and corporate alike – the lying, the misrepresentation, the withholding of critical information and medications, the obfuscation of facts and data, etc.
–  The reversal of any and all Trump administration policies (not to increase benefit but for spite it appears) no matter how successful, many policy reversals which have proven catastrophically damaging to “We The People”.
–  An election in 2020 that was undoubtedly rigged, the proof of said riggery being exposed and proven as time and data suggest.
–  Overcompensation for fringe “realities” (BLM, AntiFa, transgender hysteria, White Privilege, abortion, racism, IQ denial, etc.).
–  The illegal immigration tragedy.
–  The polarization of the citizenry by demonizing those who have different opinions, views, beliefs, and political perspectives.
–  The blatant aggressive suppression of Free Speech.
–  Increased bureaucratic policies that delay plans, increase costs, over-complicate / obfuscate processes and often contradict existing policies.
These are only a few that come to mind.
What to do?
What to do when you are the Party that employs the motto “never let a crisis go to waste”?
Why, you create synthetic crisis after crisis to keep the “opposition” off-balance, and the general public distracted.
The “opposition” being anyone that does not support the Democrat Party platforms and objectives.
The Democrat Party seeks total control.
The Democrat Party does not believe in debate, fact, data, logic, or any deviation from their platform of domination.
This is insanity.
What are some contrived “crises” being perpetrated to keep the “opposition” off balance?  Let us speculate on a few possibilities.
Joe Mekanic and I will NOT bloviate on the Ukraine – Russia tragedy.
We think both players are corrupt, and the good ol’ U.S. of A. complicit.
If we were praying persons, we would pray for the innocent whose lives are ground to pieces simply for being in the wrong place at the right time, or the right place at the wrong time, et cetera.
We will not expound on the Roe vs Wade “leak” for patently obvious reasons – this is a States and The People issue, not a Federal issue as CLEARLY DEFINED in the Constitution.  Roe vs Wade was clearly political, some say eugenicist policy.
We will not discuss the persecution of the January 6th arrestees, although this is clearly a bitter politically motivated violation of half a dozen of the Amendments to the Constitution.
What we will bring up is that old canard, that bugaboo, that necessary companion to the First Amendment (the right to speak freely), the all important Second Amendment (right to bear arms – you always had the right to bare arms, at least in non Muslim countries).
Tyranny cannot prevail if free people have the means of insurrection.
This insurrection has a legitimate hierarchy of process.
Question and debate of facts and data would be the obvious first step of legitimate insurrection.
The final step is violent objection.  Violence among the human species is attended most often with tools of violence.  Samuel Colt is attributed thusly –

Hence the latest Democrat “hair across their ass” reaction (thanks Wendy F.!)
This is a graphic representation of the people who did the ultimate atrocity in 2021 – mass murder (defined as killing four or more people) – 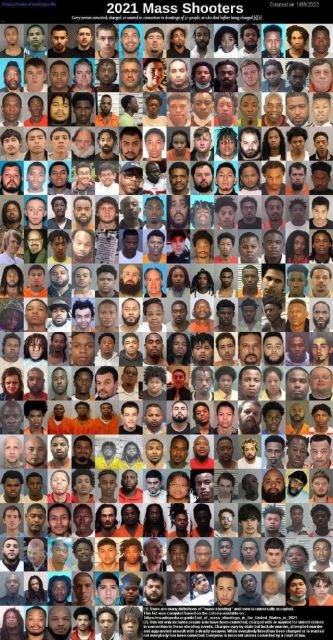 Why are we going down this trail?
Something stinks to high Heaven about the Buffalo white racist murder spree.
(If you accept all you’ve heard about the Ukraine-Russian conflict as gospel, you can skip down to the next segment – nothing here, move along…..).
Look at the faces in the above graphic.
Notice anything?
Joe and I noticed something.  Most of these killers are NOT WHITE.
Not that it matters to Joe and me – sinners all, including us.
The Buffalo incident white dude was mentally unstable.  His manifesto is very lengthy.  It is being suppressed.  But, some folks who have an inkling of WTF? have some comments that hold water.
One such comment insists that this was a FBI or ATF fabricated incident – they found a weak minded stooge and built a legend.  Here’s a criticism in graphic form – 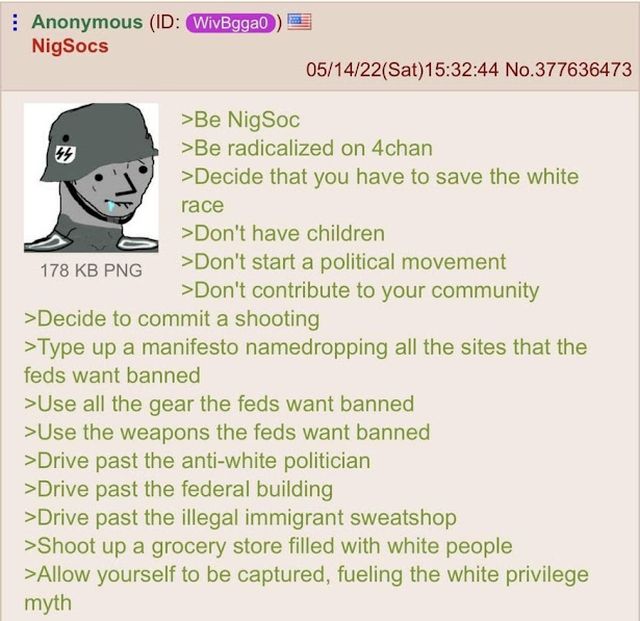 Joe and I have no way of validating any of this information, but we did read it.
You can too – here.
An interesting quote from the link –
“Yep.
And the thing of it too, is that he states that IF he survives, that he’s going to plead guilty.
Funny that.  According to the news, he’s pled “Not Guilty”
And the manifesto?  Man, you’ve never seen a document being hidden/deleted/blocked like this before.  I mean as soon as someone somewhere puts it up, BAM!  Gone-o-roonie.  Methinks it’s because it IS so fucking jacked and contradictory.  Add on that it’s fucked up the narrative that he didn’t self terminate.  NOW they have to worry about him talking, unless they “Holmes” him, i.e. drug the every living fuck out of him to incomprehension, and lock him in a deep dark hole while they try to re-establish the narrative.
And yeah, the distance thing:
Buffalo?  He lived almost 4 hours away. 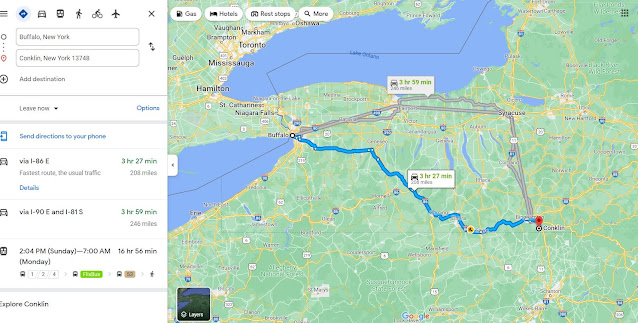 So, that’s the general gist of it.
TL;DR: A poorly crafted “manifesto” that may/may not have been originally started by the MK-Ultra Kool Kid that was turned into a “dream list” for the various FedGov agencies ban hammer.
We’ll see Monday.
…..Going to be interesting. I fully expect Monday the sound of Gnashing and Rage seething out of the Offal Orifice. Expect Executive Action and stand by Aye?
More Later I Remain The Intrepid Reporter
Big Country”
In these times of COVID conspiracy, Russian conspiracy, cybercoin conspiracy, general purpose conspiracy, this White Supremacy conspiracy seems too convenient.
Time will reveal all.

Top MAGA Memes
Joe and I found this to be an excellent summary of some of the crap that has befallen us all.  Eternal vigilance is impossible:

COVID Update
On the 11th of May there was a “Global COVID Summit” wherein international representatives of the medical, medical science and medical research community made a public statement  condemning government interference in the medical response to the so-called “pandemic” of 2020 and 2021.
17,000 doctors and scientists strong, their Declaration is a pledge to return science to the pinnacle of medical response, and to identify and punish the perpetrators of the political mandates that have destroyed or ruined so many lives.
The following video features a number of brave souls who lost employment, rank, and prestige by presenting an alternate perspective to the government mandated response that killed and maimed so many people.
Joe and I say these are wonderful words, wonderful objectives, and wonderful people.  Just how far they will get in bringing the guilty to justice is another matter.  Watch and cheer them on!:

A few days later Dr. Robert Malone was interviewed by Marie of ZeeeMedia.com.
Shocking information about how the W.H.O. has political ambitions to control the medical system for the entire World.
Needless to say Joe and I will be included the fuck out.
Our days of trusting without question any system greater than an individual are long gone.
We don’t trust anyone.
The political hanky-panky Dr. Malone reveals in the following video is beyond ludicrous.  These are reasons to revolt:

– Majority of Vaccinated People May Have Myocarditis

– COVID UPDATE: What is the truth? 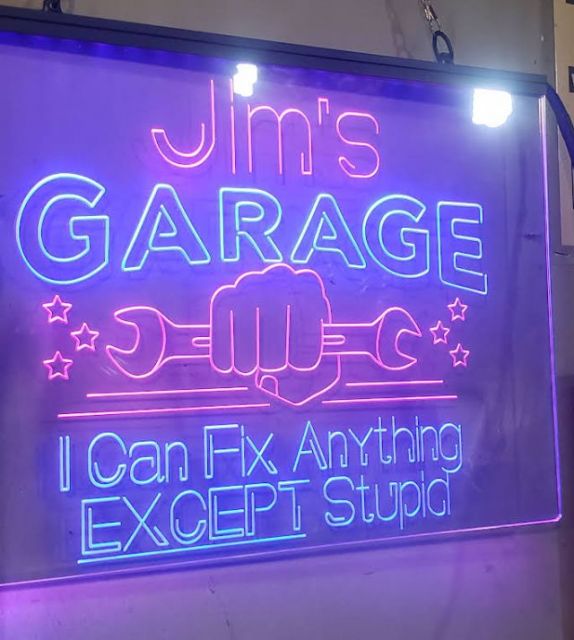 Carnivore Diet Data
Dr. Anthony Chaffee interviews Dr. Sarah Zaldivar with the focus on what the benefits of the carnivore / low carb diet can be.
Her Ub2b channel is here.
No matter what the motivation, be it weight control, health concerns, or curiosity, the experimentation with your personal nutrition can only improve your health.
The siren call of sugars and carbohydrates is ingrained in our Western culture, and most folks are fed a diet of the same from the very earliest days.
It is difficult to break the cycle, but once done, our life has changed for the better: