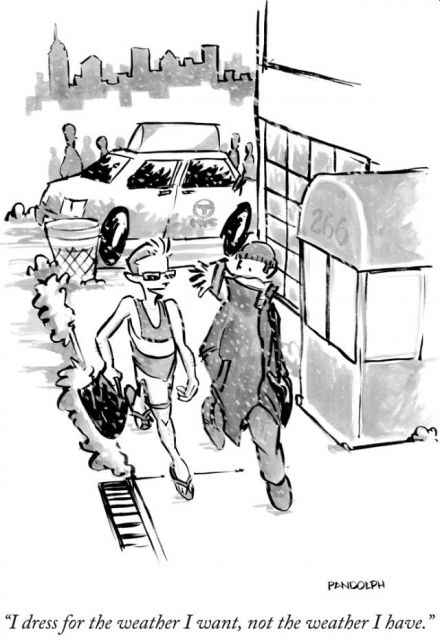 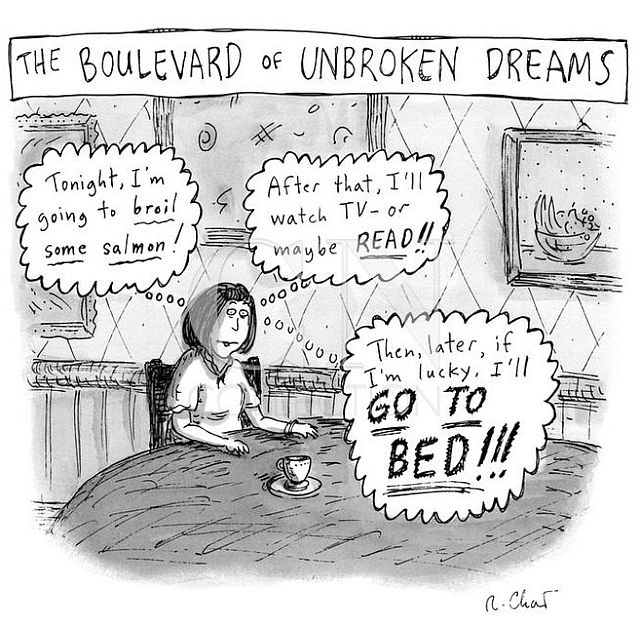 Joe’s Comment – I admit to being overly sensitive to Winter weather.  Or indigent weather of any kind.  An archaic use of the word “indigent”, meaning poor or deficient in what is requisite.
What is requisite (especially in February, the harridan of the calendar) is sunshine, warmth, greenery.
I remember being outside in the sun most of my life.
It is a false memory, for life in Canada isn’t Kalahari Desert days.
I spend time outside in Winter, but it just ain’t the same.
There were Winters in Calgary when I refused to wear a jacket, only a sweater.  Like the Corey Pandolph cartoon above – livin’ the life.
When Winter gets me down, the cabin fever rages and the winter madness is overwhelming, the Roz Chast cartoon about the boulevard of unbroken dreams is symptomatic of my sub-zero cold-blooded reptilian response.
A cup of warm cocoa (skip the salmon), a bit of TV, and so to bed…..

Quick Dick McDick
What would Monday be without a bit of humor from Saskatchewan’s foremost ambassador?
On this Monday, QDMcD tells all (thank you Ms. E. Thrasher) about “Windydaday”, “For Sale”, and “Succession Planning” aka “Farm Succession”, in a collection called Short QDMS III: 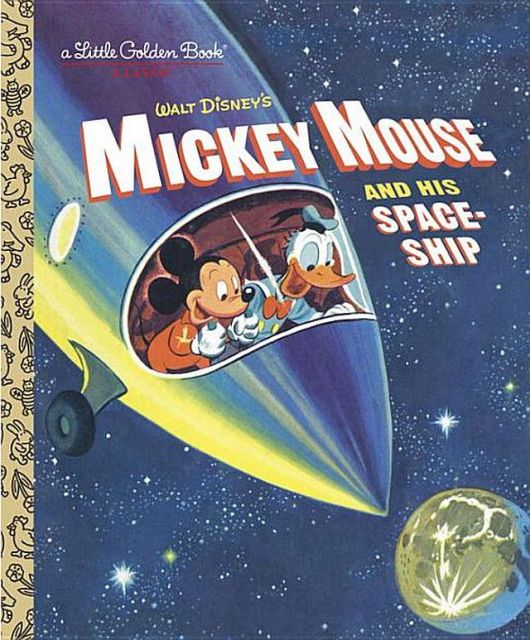 Joe and I got hung up on one image in the book – Mickey and Donald are at the shop working on that beautiful ship.
What a concept!
You can actually build a space ship and go to the moon?
We’ve been gear heads ever since.
If you have a “few whiles” (a phrase coined by my son Donald), the lovely Krissy will read the story to you:

We believe there is nothing more noble, more majestic, than for Mankind (and any womankind who care to participate) to reach out to the stars.
Seems the Biden administration see things differently.
Recent legislation has grounded Elon Musk’s SpaceX.
Will this be a canary in a coal mine for the Space Force program too?
The degree of myopia the left exhibits is extraordinary.

SJW Scare O’ the Week
Joe and I watch Dr. Shawn Baker’s early morning walk video most every day.
He is the creator of the website “MeatRx“.
Each morning he walks his dogs Sasha and Maximus and reflects on the latest controversy his nutritional beliefs are assailed with, most frequently (almost always) by vegans, vegetarians, animal rights groups, and sometimes other doctors who can’t shake their basic training.
Today he briefly addresses the latest movement, “White Veganism”.
Joe has no comment.
I say, after watching the examples of “spokespeople” in this video, that I wonder what these types of people did before the Internet.
They yearn so sincerely to be on the correct side.
Perhaps someone should tell them that they are welcome to follow their own paths.
However, when they insist that everyone else MUST DO the same, they cross a line:

Remembering Rush Limbaugh
A thoughtful commemoration of Rush Limbaugh by our favorite historian, Victor Davis Hanson, plus reflections and commentary on current events:

Fall of Civilizations – Episode II
Last week we embedded the first episode which told the story of the fall of Roman influence in Britain.
This week the story is the fall of the Bronze Age.
Joe and I must have been asleep for these 4 score minus 9 years.
Interesting overview.
Interesting ruins.
The three conflicts in all their terrible majesty – man against man, man against nature, and man against himself (and woman too, if you must):

Ford Flathead
The first vintage Ford Joe and I owned was a 1939 Deluxe 2 door sedan, with 3 speed (floor shift) standard transmission, 239 cubic inch V8 flathead engine, torque-tube drive line, and a working push button radio!
It was a forest green, and looked like this – 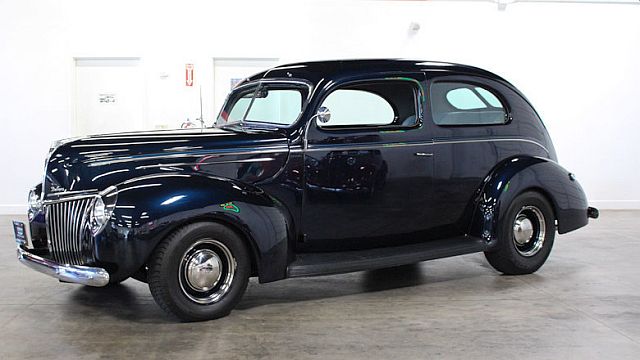 Joe and I broke the transmission after driving it for a year or so.
If it was today when that happened, we would have re-built the transmission and kept it stock.
It was a beautiful old vehicle.
However, being 18 years old and knowing everything under the sun (heavy sarcasm) we took out the flathead engine and drive train, then replaced it with the drive line from a 1958 Ford.  We discarded the automatic transmission and found a standard gear box to put behind the 332 cubic inch FE series engine.
If we ever get to Heaven, we will have a lot of ‘splainin’ to do for ruining such a fine automobile.
The following video shows an early style flathead V8 rebuild.
The man doing the build is a legendary engine builder, Keith Dorton.
Mr. Dorton is the owner of Automotive Specialists.
A bore and stroke of this otherwise stock 239 block yields ample improvements: