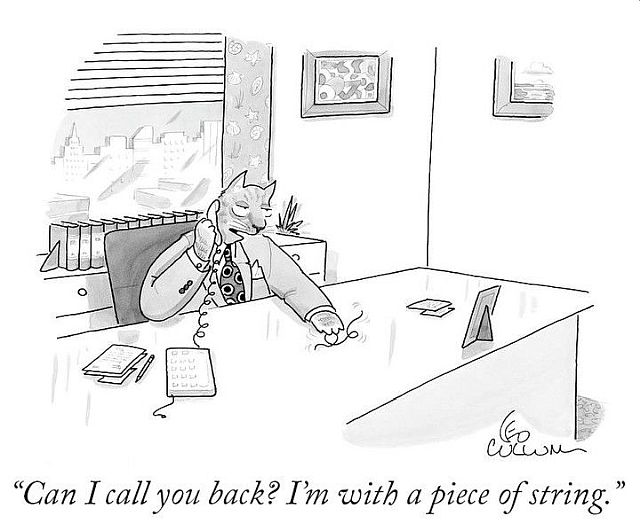 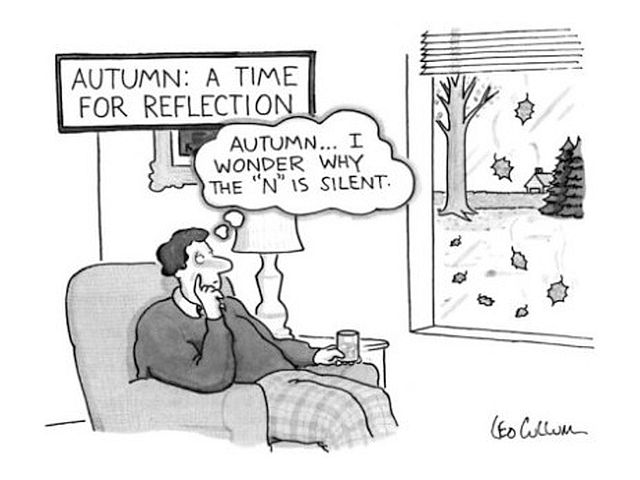 Joe’s Comment – Leo Cullum has described my mood with these cartoons.  I can’t seem to shake the affect the early snow several weeks ago had on me – a portent of nasty to come.
Tonight it is forecast to dip well below zero Celsius.
Part of me is saying let’s get the crappy weather over with, while knowing damn well it will be 6 months before my dread of freezing abates.
Another part of me is ignoring the weather and every other subject in a type of hibernation self defense oh look! shiny thing! sort of way.
Loss of perspective and focus and dedication to task.
I’ll rally the troops any day now…..
Meanwhile, hurry April!

Treason and Malfeasance
Joe and I were rooting for President Trump.
It only seems fair to us that the only political leader we have known in our lifetime to actually deliver on more than a Pareto Number of his platform promises would be given a chance to continue doing what he said he would do.  How refreshing would that be?
We believe he’s earned it.
However, to some, he hasn’t earned anything, because Orange Man Bad.
Facts don’t care about your feelings.
The corollary is also true: your feelings don’t listen to facts.
We watched a large number of President Trump’s rallies leading up to the election.  He referred to some of them as “protests” instead of rallies at some venues because in certain blue states, large gatherings were verboten by governor’s mandate.  Strictly a health (COVID boogyman) consideration of course.  Couldn’t be politics.
We saw tens of thousands of people come out to cheer him on, irregardless of whatever the Governor decreed.
Other venues were cancelled by local government at the last minute – but concerned citizens came to the rescue and provided ample space.
Up to five rallies a day, literally a hundred thousand people or more came out daily in all sorts of weather.
His base was energized.
They still are, perhaps more.
He is a living breathing Energizer Bunny®.
Not so for the Biden/Harris dumpster conflagration.  Turn out on the few rare occasions when JB was cogent enough to appear and utter a sentence, or the few KH rallies, the crowds were meager or not existent outside of the press.
We also saw shenanigans on the election evening.
Polls being shut down.
Official observers not being allowed to observe.
Mysterious packets of “ballots” arriving in the dead of night with hundreds of thousands of votes for Biden and not one vote for Trump.
Some facts are beyond dispute.
Trump garnered the largest minority vote in over 60 years.
A huge turnout across the public spectrum.
And the press is calling it for Biden, despite the data.
It ain’t over until the Electoral College says it’s over, despite what the main stream media is promoting.
Joe and I are chilled by the prospect of America coming apart because neither the left or the right has faith in the election process.
We will watch and wait and see.
Here is Jason Siler of Blue Collar Logic with some points to ponder:

Another interesting take is that of Larry Correia, proprietor of the website “Monster Hunter Nation“.  His article, “The 2020 Election: Fuckery Is Afoot“, makes a compelling case for the Supreme Court to get a hustle on and stop the clock.  Here is his list of “red flags” his accountant mind registered –
“I’ve been trying to keep up with the firehose of information about what’s going on during this clusterfuck of an election. Last night I was on Facebook talking about the crazy high, 3rd world dictatorship level voter turnout levels in the deep blue areas of these swing states was very suspicious. Somebody gas lighted me about how “I’d have to do better than that”, so this was my quick reply, listing off the questionable bullshit I could think of off the top of my head:
The massive turn out alone is a red flag.
But as for doing better…
– The late night spikes that were enough to close all the Trump leads are a red flag.
– The statistically impossible breakdown of the ratios of these vote dumps is a red flag.
– The ratios of these dumps being far better than the percentages in the bluest of blue cities, even though the historical data does not match, red flag.
– The ratios of these vote dumps favoring Biden more in these few battlegrounds than the ratio for the rest of the country (even the bluest of the blue) red flag.
– Biden outperforming Obama among these few urban vote dumps, even though Trump picked up points in every demographic group in the rest of the country, red flag.
– The poll observers being removed. Red flag.
– The counters cheering as GOP observers are removed, red flag.
– The fact that the dem observers outnumber the GOP observers 3 to 1, red flag (and basis of the first lawsuit filed)
– The electioneering at the polls (on video), red flag.
– The willful violation of the court order requiring the separation of ballots by type, red flag.
– USPS whistleblower reporting to the Inspector General that today they were ordered to backdate ballots to yesterday, red flag.
– The video of 2 AM deliveries of what appear to be boxes of ballots with no chain of custody or other observers right before the late night miracle spikes, red flag.

Any of those things would be enough to trigger an audit in the normal world. This many flags and I’d be giggling in anticipation of catching some thieves.
And it isn’t that I have to do better. I’m just an gen pop observer who happens to be a retired auditor with a finely tuned bullshit detector. This is going to the courts.“
In the words of Steve Bannon, “there are no conspiracies; there are only coincidences”.  Joe and I will agree; there are too many coincidences.

Canadian hero Gad Saad (The Saad Truth), with tongue in cheek, makes his perspective clear.
If sarcasm were bricks, Dr. Saad has a couple of pallets full, ready and waiting:

From the comments under Dr. Saad’s video, Karen Staughan piles on.  The sarcasm is strong in this one – 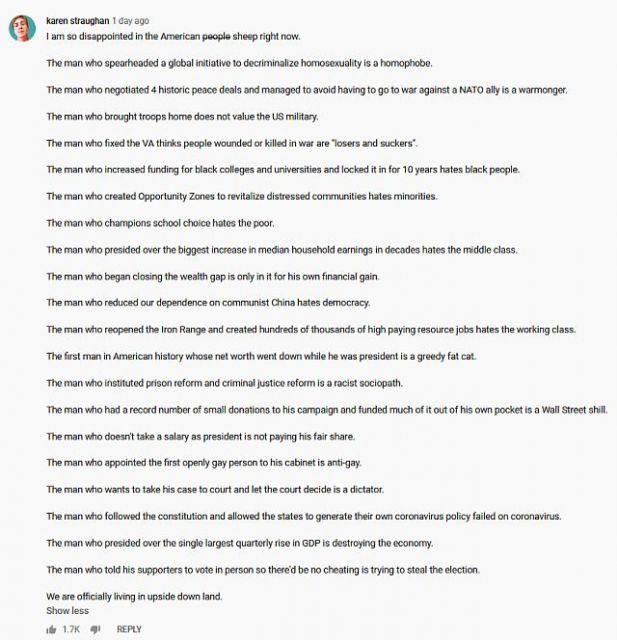 Joe and I remain skeptical.
And somewhat fearful.
Is this what happens when half the people in the country don’t pay taxes?
Is this to be expected when half the people in the country receive government assistance?
If what our coincidence antennae are reporting is true, big problems lie ahead for our brothers and sisters in America.
May cool heads prevail, and raw data be transparent. 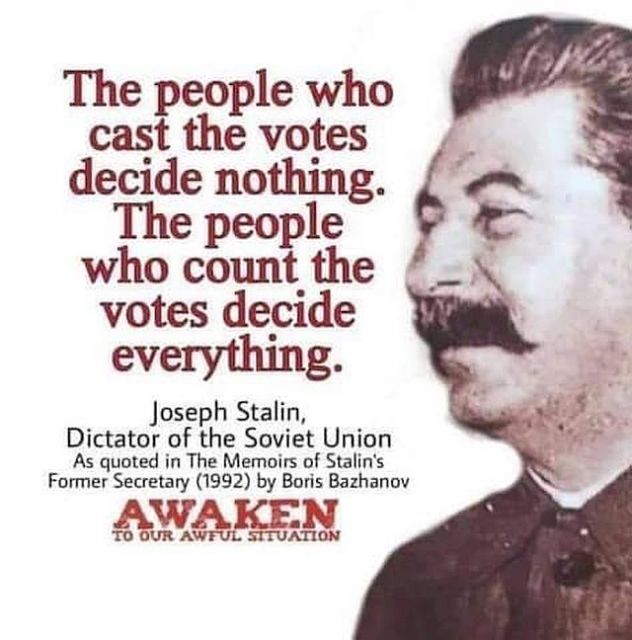 Jason Fung
A Canadian liver specialist who has had an incredible impact on reversing diabetes type II with a combination of diet (low carb) and fasting.
In this video, he analyzes the value of counting calories.
It ain’t the calorie content he insists, it is the reaction your body has to the type of calorie you are stuffing with carefree abandon down your pie hole.
Joe and I concur.
A gallon of gasoline has many calories:

Ron Paul
Mr. Paul is a doctor and an ex-congressman from Texas.
What Joe and I admire is his Libertarian stance; he was an outspoken Independent in Congress, and he is still an outspoken Libertarian.
Dr. Paul explores the concept that “submission” is the underlying goal in the world-wide government push to control the people – COVID is a handy raison d’etre to accomplish the change.

Humorous Interlude
Joe and I spend a lot of time by our own self.
Actually, we spend most of our time by our own self.
We peruse past Sunday Rant editions with a critical eye.
Our natural inclination is to get quite serious.
As Joe says to various and sundry we encounter who have a scowl or frown on their face especially if female (it is never me who says it), “smile or I swear I’ll kill myself”.
Most times it garners a grin or outright laugh when the subject of our comment realizes they have been walking around “with a smile turned upside down”.
Quick note: a few years back a similar comment landed us in jail  – caution to the wise.
Occasionally the reaction requires us to do the Ricky to Lucy – some ‘splainin’ – although a quick and not so quick search of the Internet confirms that Ricky Ricardo never said that to Lucy in any episode of their TV series I Love Lucy.
That requires some ‘splainin’ right there (it is called the Mandela Effect).
Back on subject, Joe and I thought some humor is appropriate.
Life isn’t all Blitzkrieg or Sturm and Drang.
Joe says if yer not having fun, you’re doing something wrong.
Here is Jeff Allen explaining “The Wife’s Code”:

To tickle your remaining non-funny bones, here’s Bengt Washburn with “Too Ugly for Comedy”:

David Woods
Joe and I hold Mr. Woods in highest regard.
A self confessed psychopath with a criminal record and jail time in his past, he is a Christian warrior in the battle to educate the adherents of Islam about their false prophet.
Here is his take on a Pakistani girl’s school teaching the womanly skill of beheading:

If the Hindu’s Are Right (or Oh! To Be a Tool and Die Maker)
It is a tenant of the Hindu faith that reincarnation is part of samsara, the product (good or bad) of Karma®.
If so, Joe and I are trying to improve our Karma score, for next time around, we would chose to be a cartoonist by night, and a tool and die maker by day.
Or vice versa…..
This weekly rant relies on cartoons to project a mindset, or idea, ad nauseam.  The category of “cartoonist” has broadened in our mind to include memes and clever graphics / animations / compositions of wit and humor with a message.
We love a good cartoon or meme!
How about the tool and die end of our desire?
Here is an example of brilliant design, economy of motion, and efficient execution.  This video shows how chain link fence is made.
Simply brilliant!: