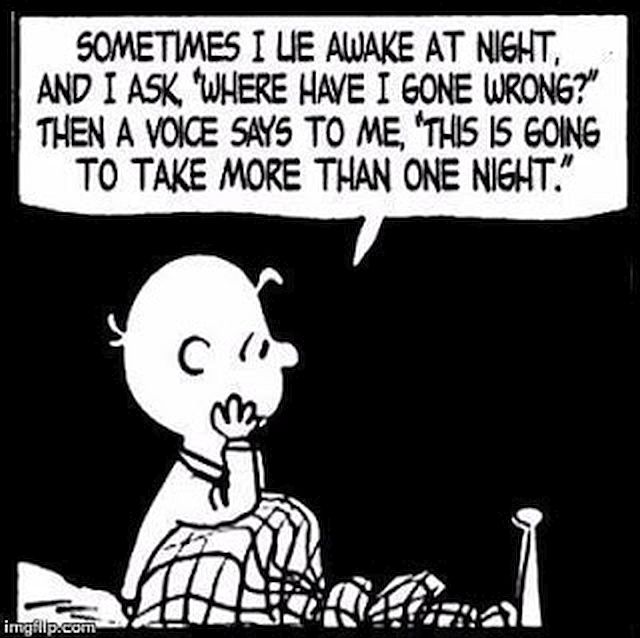 Joe’s Comment – Charlie Brown has a self deprecatory way of identifying a problem.
Is it a Yogi Berra moment (when you see a fork in the road, take it!)?
Or is it a Frank Sinatra moment (my way):

I suspect that there is a balance – reflection is only wrong if morbidly granular and perspicuous, without a goal in mind.
How much and when….. and to what end?
Those are good questions.

2020 Breaking News
Joe and I have been trying to understand what in the world 2020 is all about.
This is indeed the best explanation we’ve heard:

Q Action News
Brian S. sends these marvels to us.
We have been resisting, for the music has not been to our taste.
However…..
Pink Floyd!
There is red meat here:

Here are some screen captures from the video, representative of the entire production. 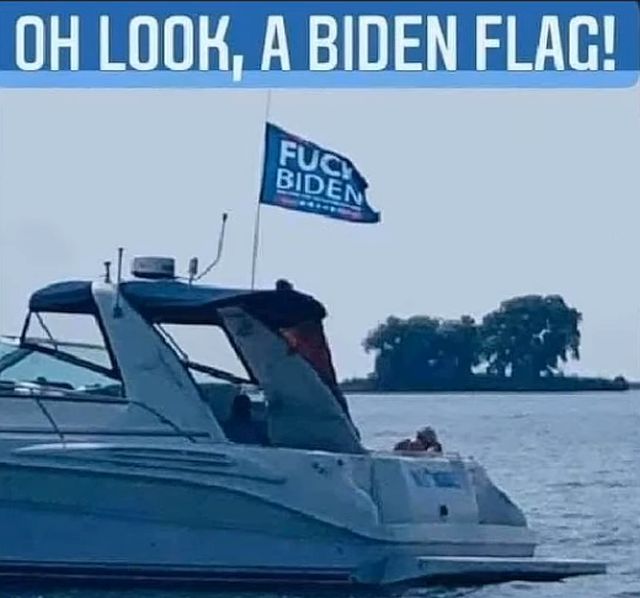 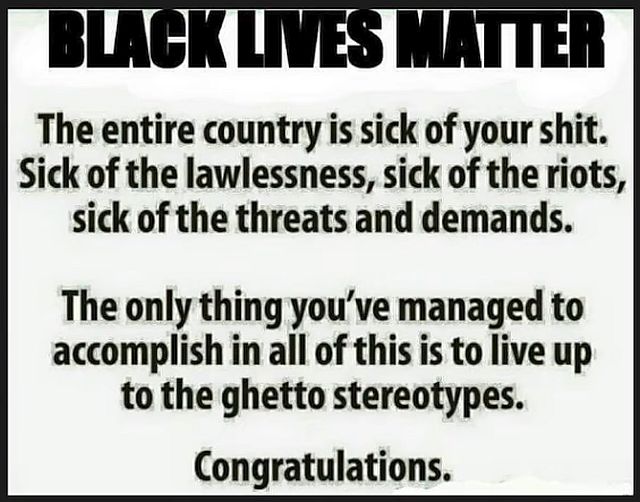 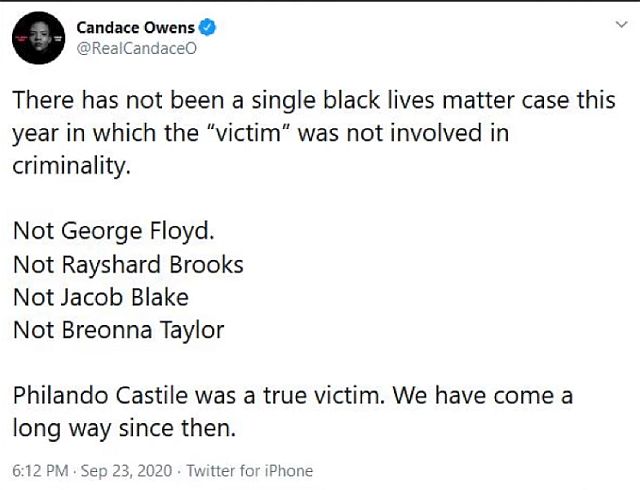 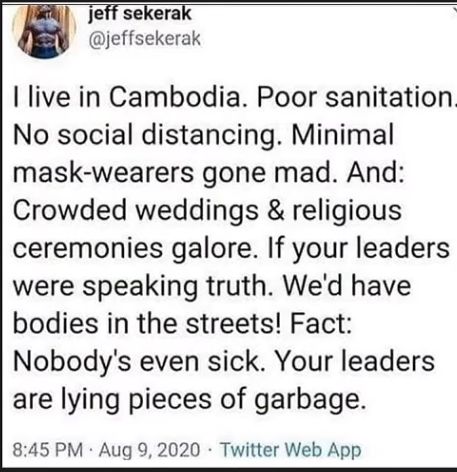 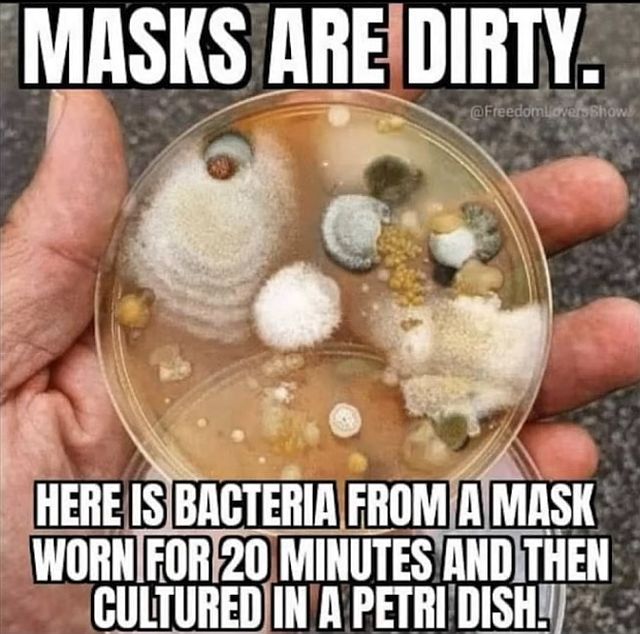 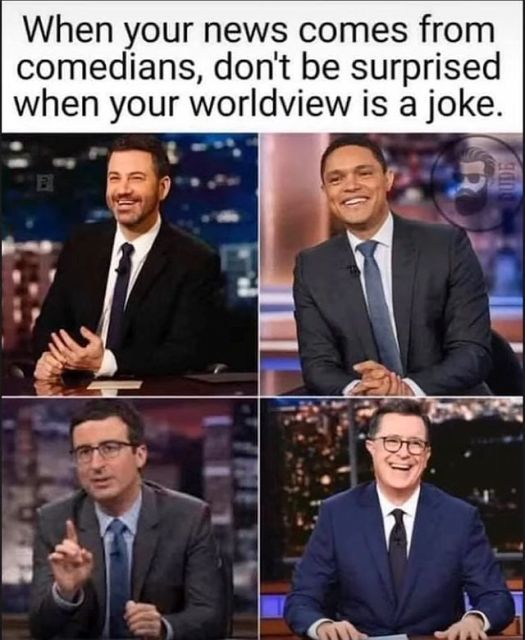 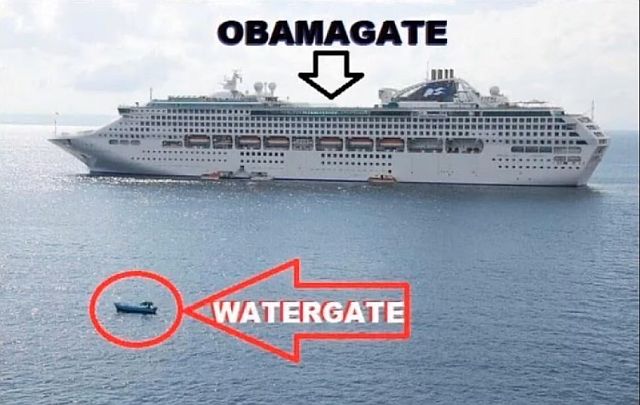 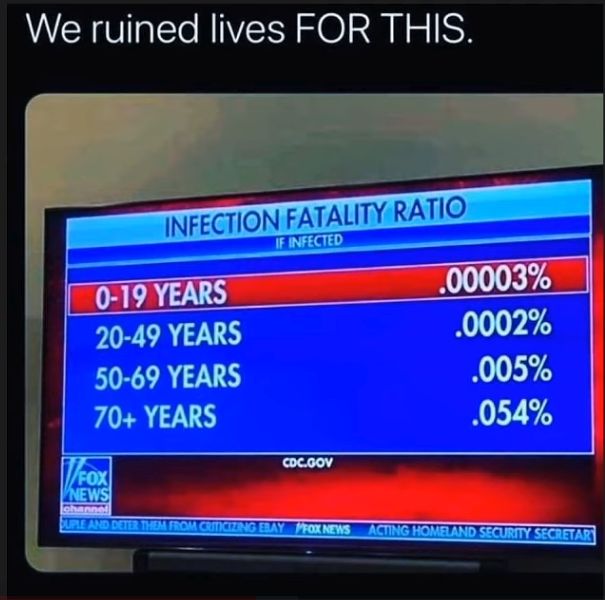 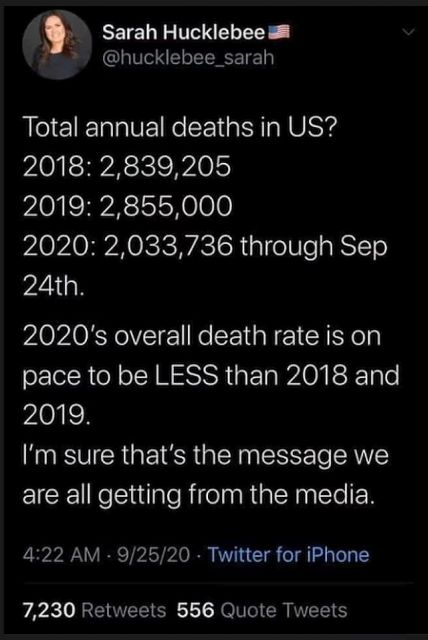 Joe and I agree with the above and approve all such messaging.

Covid Update
The following graphic is all that we need to make a case.
You are welcome – 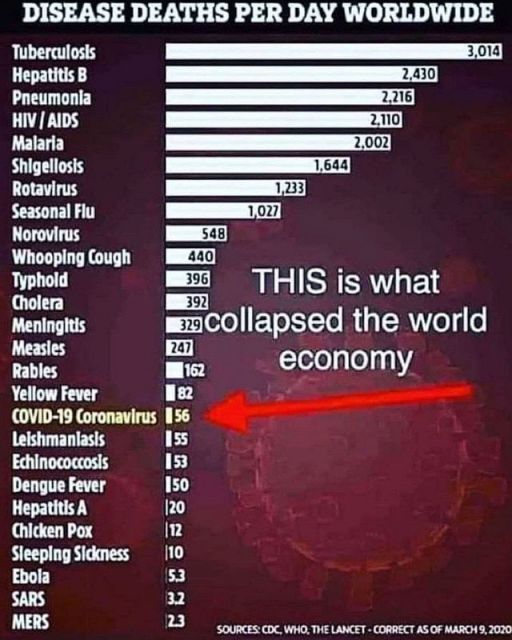 The humor and accurate criticism helps to deflate our anger – 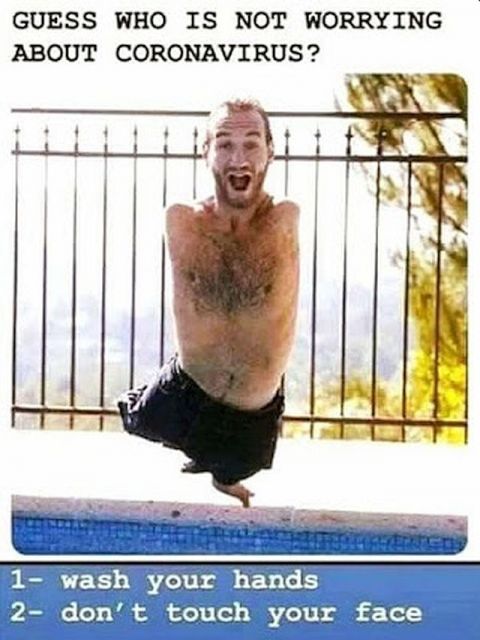 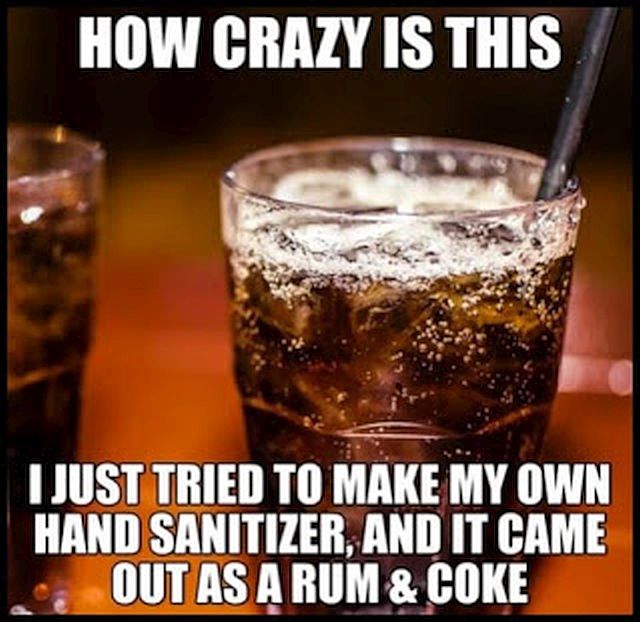 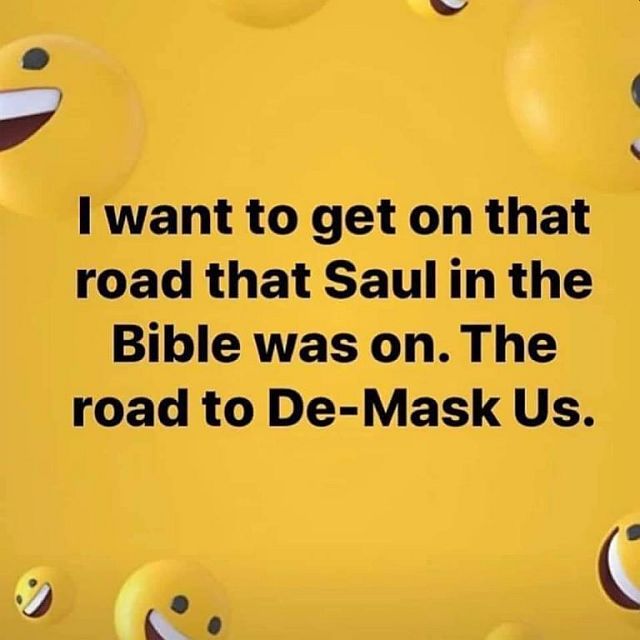 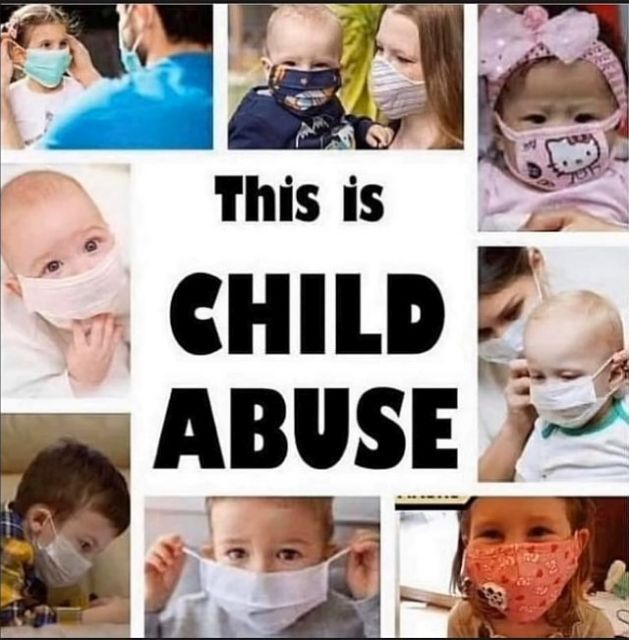 First Presidential Debate
Joe and I watched as much as we could stand.
The questions were a form of pandering to the Democrat agenda.
The moderator was clearly on the Democrat bench; he hates Trump and would favor a tomato over the President.
Joe and I start yelling at our computer screen.
We are weak…..
The reviews of the “debate” were more difficult to watch.
What we saw was Chris Wallace stopping the actual debate between Trump and Biden every time Trump landed a fact, every time Biden couldn’t or wouldn’t respond to the fact.
Example – Joe Biden trumpeting that “You are the worst president America has ever had, c’mon!”  This is not a debate, it is just name calling if no proof or data or fact accompanies such a statement.
Donald Trump replying that “I’ve done more in 47 months than you’ve done in 47 years, Joe.  We’ve done things that you never even thought of doing, including fixing the broken military you gave me, including taking care of your vets”…..  The President was interrupted from continuing by the moderator, who quickly changed the subject.
It was like a boxing match between two unequal opponents where the referee’s soul objective was to prohibit an actual fight.
As commenter “OK” stated (about a debate critique Blaze video) “Biden is really bad at being a moderator. Hopefully the next moderator will be better so Trump and Wallace can have a fair debate“.
The review we could agree with came from Mark Dice:

Joe says if Chris Wallace wasn’t in Joe Biden’s corner, the “debate” would have happened like this, for all to see (thank you Ms. E. Thrasher):

Some graphic commentary which supports our perspective – 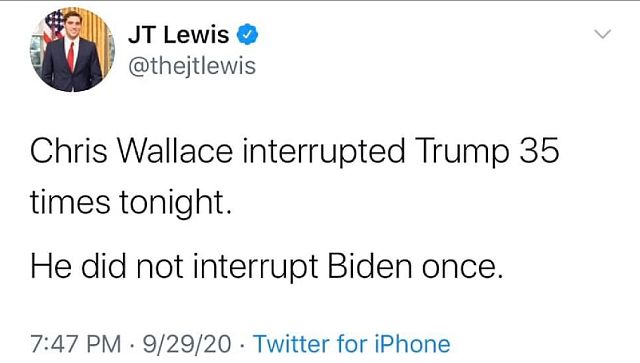 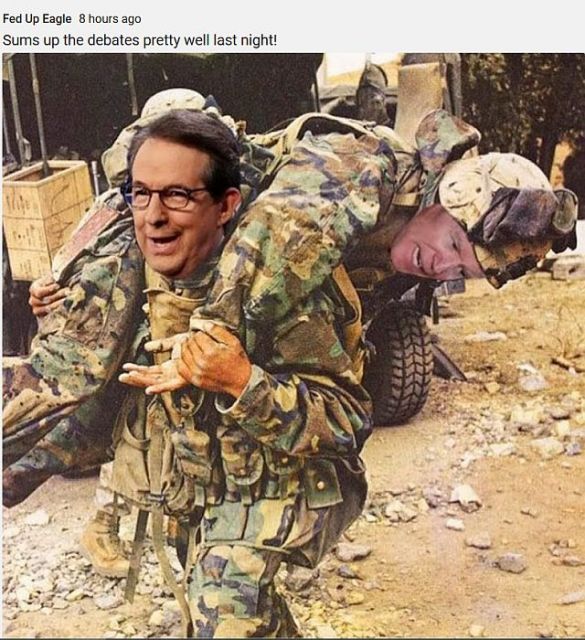 Jim Jordan
Congressman Jim Jordan comments on the hypocrisy about and lack of support for free speech in America today.
He calls the progressive psychopaths “the mob”.
The Mob is frothing at the mouth in a rabid take no prisoners pogrom.
They are eating their own.
Joe says it can’t happen soon enough.
Perhaps some time in the crowbar hotel would allow the crazies to do a bit of Charlie Browning (cartoon at top of this rant):

Watch yer Mouth!
Joe has a dreadful potty mouth when he is working on machinery.
He has been the target of scorn: use your other words – swearing is weakness – if you don’t stop I’ll tell mom.
Joe doesn’t profess to be a real live honest Injun dirty fingernail mechanic; hence the spelling (Mekanic).
However, if you don’t know why Joe screams and curses, we have finally found a graphic which explains de ‘hol dam’ t’ing – 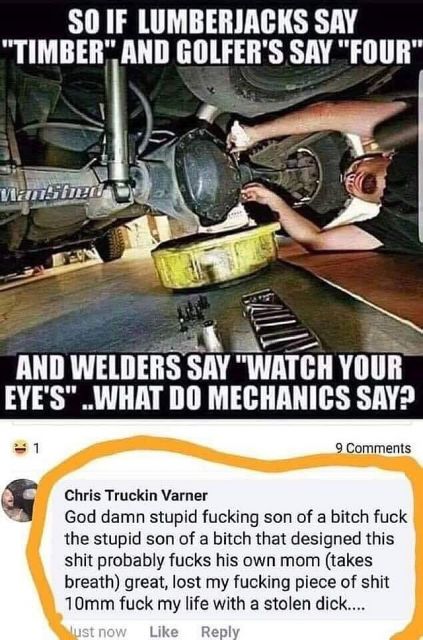 Cajun
The autumn seems the best time for Cajun  music to Joe and me.
Here’s some that get our feet moving
Joe says we should have paid attention in French language class:

Hell, let’s have some Zydeco too:

Autumn is here.
Dead cats on the roads: you know we’re right.
Winter is coming.
Nipple-y mornings don’t lie.
Get those feet moving, and let yer brain coast to a stop.
Joe wants to learn the steel guitar…..

Carbohydrates
Dr. Robert Cywes explains the mechanism of carbohydrate consumption in a person.
Joe and I are so efficient at converting carbs, we can gain a 1/2 pound just looking at a picture of a loaf of bread.
We are continuing to tailor our diet and stick with the carnivore / keto plan: