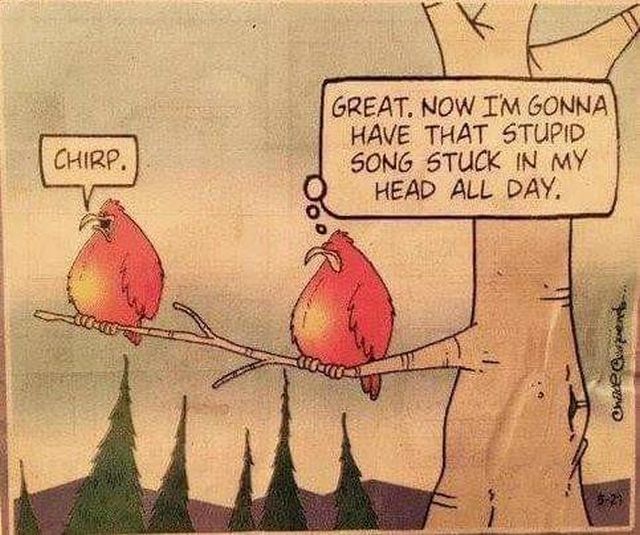 Joe’s Comment – Damn, if that isn’t a great cartoon!  If there is a corollary for the biblical expression “pearls before swine”, it is this little gem.  There is a part in my brain that is like Velcro® to a catchy tune, or a not so catchy tune.  It doesn’t have a rhyme or reason, just an appeal to that part of my head I don’t control or understand.
Depending on your attitude, you may see it as an intruder, a virus, a pox.
Or it might be music of the orbs.
Your choice, their song.
I say sing and let sing!
And live with the consequence.

School Choice
Cecilia Iglesias’s story is important.
In our daily life we Canadians and Americans (Joe says same thing, almost) forget how bountiful our young countries are in comparison to most others.
This is about changing the stranglehold the Teacher’s Union has on education:

Thomas Sowell is a hero to Joe and me.
He has recently celebrated his 90th birthday (30 June), and is releasing his latest book, “Charter Schools and Their Enemies”.
This interview with Peter Robinson of The Heritage Foundation delves into the long-standing struggle between the established government mandated education system with associated Teacher’s Unions, versus alternative methods designed to provide a superior education to students.
Dr. Sowell is an anomaly.
At 90 years of age he is cogent, alert, on track, and presents his case in his usual terse, humorous, and example replete style, 30+ books later!
From the video, quoting Dr. Sowell – “I have invested more in this book than any other book that I have written, because I realize just how big the stakes are.  There are kids for whom education is their one big opportunity for a much better life, and there are people out there stopping them from getting it because you would interfere with the prerequisites of the adults in the system“.
Joe (being a fledgling political animal) can’t help but note – if you compare this excellent intellectual 90 year old man with a certain crooked career politician challenging Donald Trump in the upcoming presidential election (for you folks not paying attention, he’s referring to Sleepy Joe Biden, 77 years of mediocrity and decline) – who is the better man?
Give your head a shake.
David Hume is credited with stating “reason is a slave to the passions”.
On one hand, we have a man who is a beloved intellectual, a national treasure.
Juxtapose him with a parasite who has no intellectual credentials, a dubious past, and family wealth gained by gangsterish association.
Which begs the question – wouldn’t you question and doubt anyone who would prefer to choose Sleepy Joe?
Back on topic, enjoy this most recent discussion (of many) between two friends:

Joe says if we can’t produce smarter kids it behooves us to produce better educated kids.
It is a foundation of survival.

More Nutrition Data
This young fella has a lot to say about vegetable and seed oils.
Unfortunately for humans, what he says is not good news if you like consuming those oils.
Joe and I use butter or bacon fat or tallow.
Yum yum!
It is all part of understanding how amazing the human body is, and how super adaptive we humans are in coping with a variety of energy sources .
You can put absolutely crappy food (that tastes wonderful) into your marvelous digestive tract and you can survive.
Or, you can put the best possible food into your body, and thrive.
The choice is yours.
On July 23rd, 2020, Joe and I will have been eating carnivore exclusively (well, the odd beer excluded) for two years.
We have lost 60+ pounds and have improved in mental alertness, agility, and general well feeling (if not being).
Not bad for a 71 year old mud pecker.
The choice was ours.
This video is Dr. Chris Knobbe posing the question “Diseases of Civilization: Are Seed Oil Excesses the Unifying Mechanism?”:

Irving Finkel
doG amighty, Joe and I have stumbled into a human treasure!
His name is Irving Leonard Finkel, the Assistant Keeper of Ancient Mesopotamian script, languages and cultures in the Department of the Middle East in the British Museum.
His specialty, his expertise, is as a philologist and Assyriologist – in this case, he studies ancient written language, specifically the Assyrian language.
He is ascorbic, humorous, entertaining, and very knowledgeable.
Why not find out why he believes what was once thought to be pictographic actually evolved into cuneiform writing – representing sounds of spoken language vs a picture/code/hieroglyph.
Joe and I are extremely glad people like Mr. Finkel are unraveling the mysteries of the past: