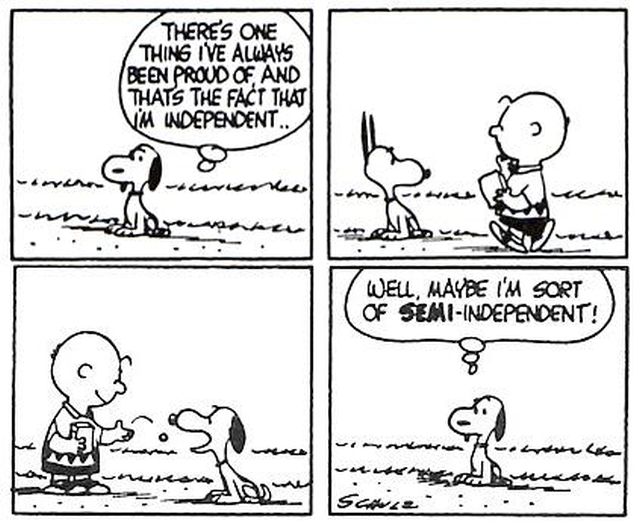 Joe’s Comment – Nothing like a good ol’ pandemic to remind people of this grim reality: for better or worse, we are all doG’s chillun and rely on one another for survival.  Man (and woman, too) is the ultimate social animal.  The idea that one can live a total independent life is poppy-cock.
Proof?
Just what the world needed; a brand new and unique never seen before way to die.  Like there weren’t enough already.
A tiny wee virus can disrupt the entire world.  Of course, this time, with modern medicine, science, technology, vast fortunes, and communication excellence, the good guys will avoid the absolute numbers that influenza claimed in 1917 – 18.
Unfortunately, those surviving will have to live through a “reset” that will probably be reminiscent of the “dirty ’30’s”.  Try and find someone still alive to hear that story:

Of course, it didn’t have to happen this way.
Curse the CCP, the Chinese Communist Party.  They put their ideology ahead of their (very selective) humanity.  The result is incalculable misery that could have been mitigated if not avoided.
Nigh time the good folks of China, the Dirt People, had a brand spanking new revolution – peaceful words, strong arguments, maybe a few cracked skulls might do the Reverso©.

Hats off to all those brave folks in harms way every day.  Those keeping us fed, those tending the ill, those desperately seeking a cure for Suzan (and whomever else).
You are an inspiration.

Coronavirus Ramblings
Joe and I have watched every Coronavirus Task Force presser from the American administration but for two.
We intend to continue for one simple reason – veracity.
Why trust our own lying eyes, our imperfect hearing, our very own feeble intellect?
Why not sit back, turn on the telly, munch a croissant, and slurp MSM slop?
Not to cause panic, but Joe and I pretty much think “journalism” is dead.
If it ever had a non-Frankensteinian life.
We won’t launch in to a tirade about “yellow journalism” right here right now because it would be moot: the press coverage of the first three years of the current Trump administration is replete with “yellow press” examples.
We will offer two thoughts, not our coinage but apt, to paraphrase our opinion – 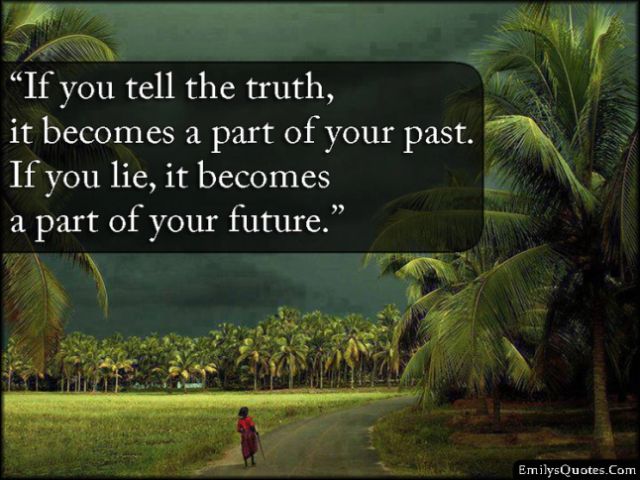 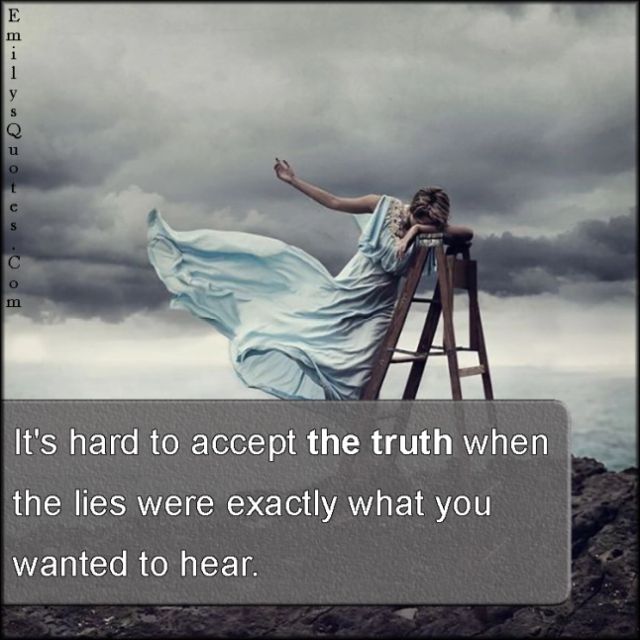 Here’s what Joe and I know from watching the pressers:
–  President Trump attended every one we saw so far.
–  He has been very active and engaged.
–  He leads his team “hands on”, but depends on his subject matter experts for non-partisan well informed data supported advice and direction (an introduction to his coronavirus team here).
–  He and his team answer every question asked (Joe: no matter how retarded the question).

Unlike people with a job, Joe and I can spend our precious remaining hours of life watching pressers if we want – they are our hours.
We also study, research, watch, analyze, discuss, and criticize in order to understand.
Here’s some of what we understand about the coronavirus controversy:
–  The wizards are hard at work trying to understand this newly minted mutant; no solution to date.
–  The fools are hard at work flapping their gums, scribbling incoherent prose, broadcasting mumbo-jumbo, and generally obfuscating clarity at every opportunity.
–  There is a huge amount of noise in the signal being transmitted by the MSM, but very little factual data.
–  Some of that signal is purposely destructive; not cooperative nor solution oriented, nor subject based: directed at discrediting the President, Donald Trump.
–  In a world of “nothing new under the sun“, this virus has upset the apple cart.
–  Joe is starting to believe that Trump Derangement Syndrome is an actual condition.

Or as Joe and I say, that’s not what the President said, and we know it as a fact because we watched the damn pressers.
Joe and I concur entirely, and wonder.
We watched what President Trump and his team said with our own lying eyes, our own ancient hearing, our own dim wit.
We get it.
Then, some absolute moron in the press, a “journalist” asks a completely irrelevant or antagonistic question.
Surely, in the name of Christ on his moped with Mother Mary sitting side-saddle, these “journalists” cannot seriously want to stampede the herd intentionally.
Many folks old and young, smart and not-so-smart, are starting to panic.
This time, unlike all the other “cry wolf” episodes that jostle to enter your consciousness, “thought viruses”, something you can’t see is spreading like wild fire, out of control, and killing an alarming number of people.
If you can’t see it, how do you fight it?
Not to say a lot of other deaths aren’t occurring in greater numbers; this is a brand new old fashioned killer, jockeying for infamy to be the worst of them all.
Panic isn’t going to do much more for you than increase stress, which we know suppresses your immune system.  Besides, if you are anything like Joe and me, you are guaranteed to make poor choices when operating in full metal jacket no foolin’ feets don’t fail me now fight-or-flight mode.
For Joe and me, our worst scenario every single time is passively waiting.  We are definitely active not passive characters.  Standing by, twitching, while the clock runs out, anticipating whatever: it ain’t our style.  The only thing that makes it worse is waiting, passively, while some nebulous “authority” determines all or part of our fate.
Joe and I buck and kick and break out in hives at the spectre of “authority” controlling any aspect of our short, sweet, loverly life.
Joe says yes, a Bobby Fuller moment is but part of the total set of authority entities:

Your reaction, your bugaboo, is probably different.
There are three conflicts.
Man against Man.
Man against Nature.
Man against Himself.
To Joe and I, all of these conflicts are jostling for dominance in the current hysteria, based on each individuals perception of what the hay! is happening…..
In the words of the Captain, we have “failure to communicate” (often with ourselves):

Our summary?
Some very rare people run toward the gunfire, toward the burning building, toward the apocalypse or tragedy or cataclysm or emergency or tsunami or catastrophe.
Most people run away.
The remaining folks (like Joe Biden) don’t know what is happening.
Time will tell.
Ecclesiastes 1:4-11 rings true (nothing new under the sun), but it doesn’t mention that every new cast of characters may not have seen it this way, in their time, in this form.  Whether it is new under the sun means little to those who haven’t yet seen.  Take that any way you can.
From our personal point of view, Joe reminds me that we’ve never won anything in any lottery.
We hope our luckless streak prevails for the duration of this deadly sweepstake.
In doG we trust; all others clean your hands, quit playing with yer face, squink yer eyes like Popeye the Sailor Man, and stand back at least 6 feet.

Curious Cornavirus News
1.  Chinese Cell Phones – An interesting bit o’ news about a curiosity in the land of the infected Panda bear: 21 million Chinese cell phone user’s accounts disappeared in the first three months of the Chinese Flu contagion.
The Epoch Times broke the story, and Breitbart News comments, too.
Follow the TET link and you will read about the total intrusion of the Chinese Communist Party in the lives of every single Chinese person via cellular phone.
Follow the BN link and you will read more about the same bunch of thugs.
Joe hopes (and I do too) that this isn’t a head count of dead, dying, displaced Chinese people, who, in all likelihood, don’t much like their oppressive tyrannical government.  Perhaps it is a move on the part of the CCP to restrict travel within their borders.  Our speculation is very grim.
2.  Wuhan Funeral Urns – According to various sources such as The Malaysian Reserve, Harvard scientist Eric Feigl-Ding, and the Express Informer, news leaking out of Wuhan indicates the 7 crematoriums in the city have been working 24/7, and the orders for urns have exceeded the CCP figure of approximately 2,500 coronavirus victims by a FACTOR OF 20+.
3.  Chinese Test Kits – Various sources report that a number of countries who purchased coronavirus test kits and materiel from China are experiencing a failure rate of approximately 80%.  The countries include the Czech Republic, Netherlands, Spain, Turkey.  Sources: The Daily Caller, Townhall, National Review.  Joe says we’ve had our share of “Chineseium” purchases too – we always boycott when we have a choice.
4.  Fuel in Vernon, BC – On Saturday we filled our Ford Explorer with regular gasoline.  It was $0.899 per litre.  First time in ages it has been lower than a dollar.  The Explorer took less than $30 CDN to fill – we are currently driving very few miles per week.  On Sunday we filled our F350 diesel and paid less than a looney per unit – $0.999 per litre.  First fill-up since January 18th.  There is very light traffic wherever we drove this last week.  We be in the briar patch most of the time.
5.  Coronavirus Humor – Too many to embed.  Joe’s picks of the week.  More below the fold – 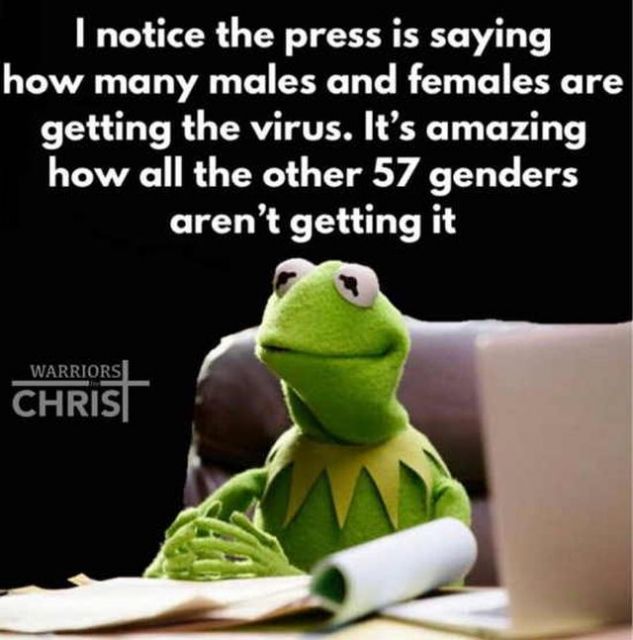 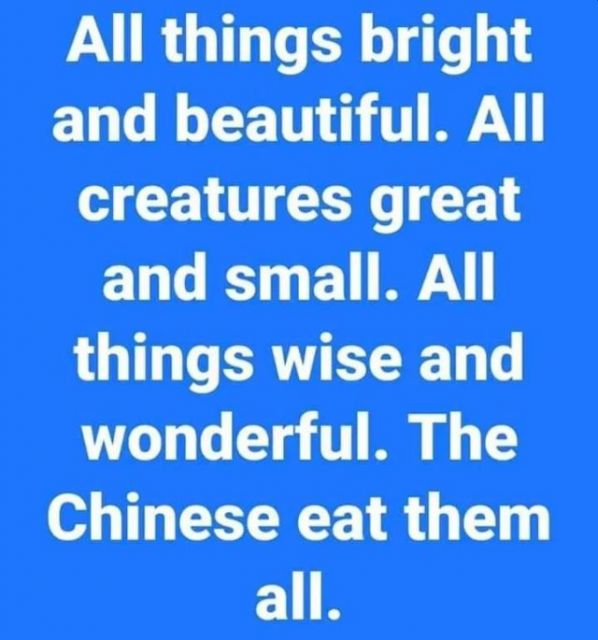 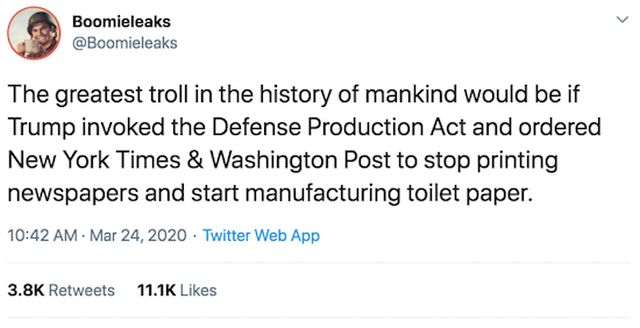 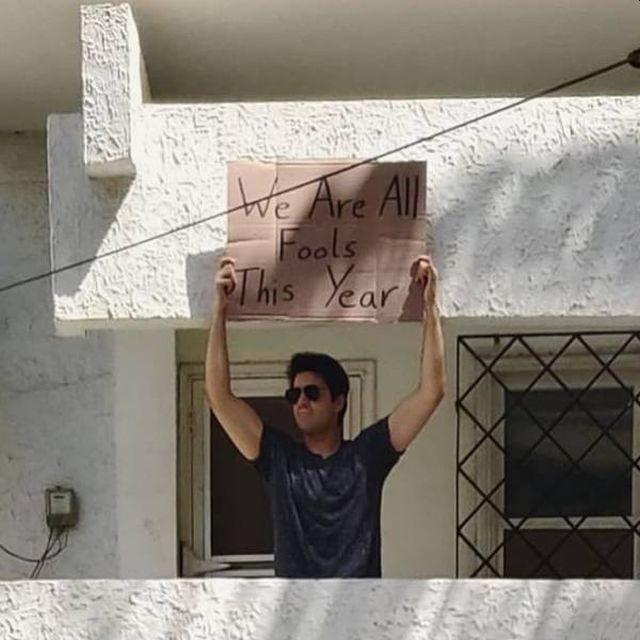 Blue Collar Logic
As a short-term one time panacea, here’s Jason Siler with some words of blue collar dirt people wisdom.
In the following video, Jason states, over and over, that’s not what the President said.
Joe and I concur:

Jason Siler has another, pertinent and cogent series of observations about the current pandemic altering every culture and economy in the world.
Joe and I like this man’s viewpoint as a genuine “dirt person”.
The concerns he discusses in this video should be on the mind of everyone, everywhere:

Dave Rubin
Joe and I have included Mr. Rubin’s interviews in our Sunday Rant before.
Usually he is interviewing a person or persons of interest to us.
However, this video is Mr. Rubin alone, with some sage advice.
Advice meant to help with the chaos the coronavirus hysteria is bringing to everyone, whether it is a heaping spoonful or a mote-sized helping.
He recommends Jordan Peterson’s book “12 Rules for Life” and Peter Theil’s book “From Zero to One” as guides in these topsy-turvy times (we prefer this version of Topsy by the Alan Hartwell Big Band, Cozy Cole on drums).
Click the link and read on…..
Joe says to keep as cool a head as you can, for it is good practice; a time much worse may come than the birthing struggles of a new unforeseen virus that likes humans and animals equally.
There will always be chaos for some, but not for all.
Practice to manage your personal resource to best advantage.  The odds maker says that will improve your chances to live and tell all (thank you Ms. Thrasher):

Joe and I concur; especially Dr. Peterson’s 12 Rules.
Great food for thought.
Or is it something else…..
Wait!  What’s this?
It’s books full of idea viruses, the helpful good viruses.
Get a non-fatal dose!

Peter Thiel
Joe and I know Mr. Thiel as the founder of PayPal.
We also knew he wrote a book called “Zero to One”, about innovation, or bringing a new idea into reality.
This interview with Eric Metaxis is current (New York City, January 2020).
The vertical vs horizontal advancement: horizontal copies and refines, vertical innovates and spawns.
An interesting and thought provoking hour: