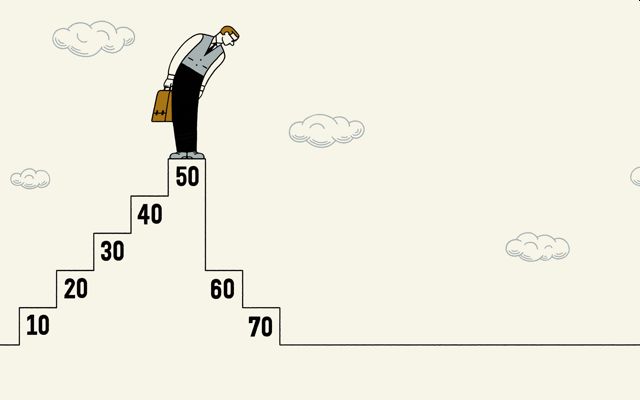 Joe’s Comment – Alas!  I’m off the 70 step this year.  The above graphic though true in context is drawn “not to scale”.  Sometimes the fall seems much larger.

Quick Dick McQuick
What can we say?
Quick Dick nails the Coastal Gaslink Pipeline protest issues and protester’s hypocrisy.
Joe and I start shouting at the TV when we see the dunder-heads protesting for money or for ideology.
This is hard on our collective health.
Better yet for us to let Quick Dick tell all:

Prager U
Why did The West win?
Joe and I have a few ideas about that subject.
If you don’t believe the statement is true, here’s a video for you.
Niall Ferguson, Hoover Institution historian at Stanford University thinks he has it figured out.
The West had 6 “killer applications”.
What remains to be seen is whether The West can educate its offspring to re-visit and re-employ these apps:

The Battery Fantasy
Joe and I think that solar and wind solutions to energy demand is not scalable.
That is, a small array and equivalent capacity windmill is an expensive option for a remote location with known energy requirements.
Such as a ranch in the Australian Outback.
Or a cabin in the Canadian Rockies.
Why?
‘Cause the sun don’t shine at night.
And the wind don’t blow 24/7.
Because of those two facts, the best solution is to have them both produce their maximum output when the sun is, indeed, shining, and the wind is blowing.  Then, through the magic of that-which-has-not-been-invented-yet, store the (surplus) energy for future demand.
The most common way to do this is batteries.  Which are not ideal.
They are expensive, fragile, temperature sensitive, non-mobile, and, depending on type of electrolyte, variously explosive, chemically corrosive, and dangerous to human health.
They also need external control devices such as regulators, inverters, converters, and various and sundry telemetry.  These technologies and materiel don’t grow on trees or come free with every purchase.
Joe and I have dreamed up a number of alternative storage methods, equally unsuitable: e.g. run an electric motor to pump water (fill a large reservoir with water then use the water to run a turbine), e.g. run an electric motor to drive a compressor (fill a large cylinder with compressed air – use the compressed air to run a turbine), e.g. run an electric motor to drive a huge flywheel ( use the flywheel momentum to drive a generator) for example.
Scaling up to run a city or town or industrial endeavour or commercial enterprise however becomes a crippling cost to provision.  And significantly expensive in maintenance and repair costs.  Essentially, wind and solar are NOT DEPENDABLE.  Ergo, a secondary energy source is required as back-up for those NOT DEPENDABLE times.  For example, if you are a “prepper” you have a back-up generator to stand in for conventionally sourced electricity.  Same thing only bigger and way more expensive.
Our fore-or-five Fathers were no dummies.
In a lot of ways they had it easier to see the forest AND the trees.
Their inventions often distilled into a best practice that still holds ground today.
When the next big thing happens – the advancement of light, cheap, abundant, high volume, safe, totally scalable, and portable energy storage – the world will be in a position to scale wind and solar.
Not until then.
Thanks to Ron D. for sending the following video.
Mark Mathis, from Clear Energy Alliance, explains:

Corona Virus Update
Joe and I found this little nugget on the “It Ain’t Holy Water” website.
The Chicom masters are great managers.
After Mao set the bar (est. 30+ million murdered) all that remains to be seen is whether the new guy Xi goes for a new record.
Shout out to Bernie Saunders – Hey Bernie!  Get a load of Xi welding the doors shut in apartment buildings to control a virus that (according to Chicom Central) has only killed a couple hundred folks.  With the people inside!  Nothing to see here folks……  Gotta get some socialism/communism here in the West!
Someone is speaking with forked tongue:

Ayn Rand explains what separates “Rights” from entitlements, and the responsibility of every person to pursue their unique destiny:

Killer T Cells (Cancer Research)
This is promising news for people suffering most types of cancer.
As with many aha! discoveries, the new direction was the result of different experimentation: it is a by-product of the original inquiry.
Although the experimentation is hopeful of useful treatment, trials with real live people are still years away:

Graphene Batteries
Joe and I quacked long and hard above about “scalability” of wind and solar energy.
The next big deal for energy would be an electricity storage device that doesn’t yet exist: very large capacity per weight, low cost, safe to use, scalable, portable, and not a health or environment danger.
A step in the right direction is the use of the miracle material called graphene.
The following video is a primer on the first graphene batteries coming to market.
Sunday Rant – 1013 and Sunday Rant – 4613 both had links to articles about this wonderful arrangement of CARBON molecules.
We are, after all, a carbon based life form living in a world of carbon creations: