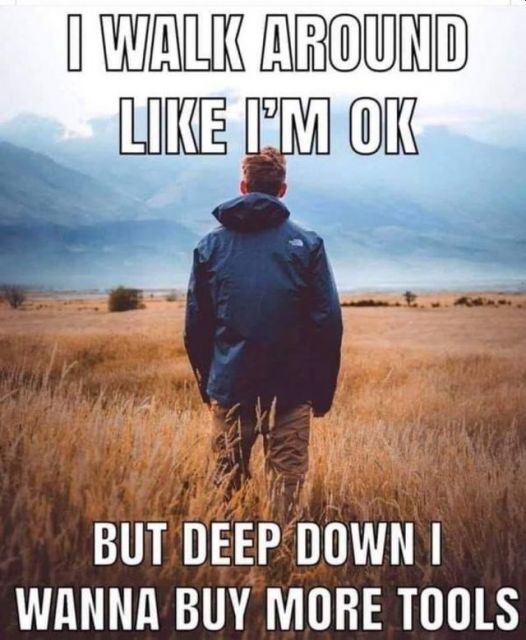 Joe’s Comment – Tools are jewels.
I bought two more tools yesterday.
Felt like a King.
Few things are as satisfying.
Building your own tools tops even that.
The rationale goes something like this – if buying the correct tool and doing the work yourself is cheaper than having the “professionals” do the work, then there is no option: buy the tool.
Man the tool.
That would be me.
Man the tool maker.
Ditto.
Makes sense in my very own twisted mind.

Dr. Judith Curry
Another hero (heroine if you must) for Joe and me to acknowledge and include in this Sunday Rant.
Dr. Curry is eminently qualified, but (like many other real scientists) doesn’t seek the limelight or hitch her personal fortune to a career frightening children for $$$.
Her presentation is logical, backed by scientific evidence.
Joe says Dr. Curry is unlike some others who cherry-pick minutia, blow it up beyond its frame of reference, then generalize about the result all the while manipulating the raw data (via programming) to produce the desired outcome.
That Joe is a real apostate:

The video excerpt is from a 2018 debate between Michael Mann ( hokey stick graph originator) and David Titley proposing CO2 driven climate, versus Judith Curry and Patrick Moore who point out how misguided it is to make CO2 the “culprit”.
The entire “debate” is here for your viewing pleasure:

Trump Impeachment
There is a Canadian lawyer who has a YoubeTube channel that concerns itself with legal matters, “The Law”, and jurisprudence.
His name is David Freiheit.  His YoubeTube channel is Viva Frei.  He hails from Westmont, Quebec.
Joe and I can only listen to him occasionally.
Not because he doesn’t make sense.
He shares a talent with Ben Shapiro and the late Stevie Ray Vaughn.
That talent is operating at about 2X the regular person speed.
Love this man.
Joe says the best way to listen is to use the YoubeTube feature of slowing down the video (click on “Settings”/”Playback speed” and choose a slower speed), so you can follow the argument.
It takes longer to view the video, but Joe says you will understand more of what he saw.
Then watch it again.
However you think and hear and translate, here is David Freiheit giving Alan Dershowitz’s impassioned argument an endorsement.
Joe and I don’t know about you, but we have a lay appreciation of the law, jurisprudence, and the “wack-a-mole” it’s here it’s there it’s everywhere Schrodinger’s Cat logic employed by those esteemed members of our society: the lawyerly lawyers.  Some tongue-in-cheek reflection, but accurate, wethinks.
As a side-bar to Occam’s Razor, does it not make sense to follow logic vs emotional logic?
The argument would be logic is mathematically provable and as such acceptable to all.  Not so for emotional logic, which is the playground of the Democrats:

Candace Owens
Joe and I know there are bad people in the world.
Abusing children is bad.
Sexually abusing children is evil to the nth.
Joe says no mercy for this sub-species of “humanity”.
This Candace Owens interview with Tim Ballard reveals the dark squirmy evil barely concealed beneath the thin veneer of civilization.
Mr. Ballard quit his American government job with I.C.E. to start a non-profit organization called “Operation Underground Railroad” with the objective of eradicating child abuse, especially sexual child abuse.
At the time of this interview (February 2nd, 2020) their organization has freed over 3,000 children from slavery.
What horrifies Joe and me is that this abhorrent behaviour is occurring in North America – we had no idea.
The start-up of O.U.R. was partially funded and supported by Glenn Beck.
Tim Ballard and his ilk are heroes, as are the people who support him.
Where, oh where is the government funding for the work these angels perform?:

Quick Dick McDick
QDM is a Saskatchewan farmer in the vicinity of Yorktown.
His YoubeTube channel is here.   Check out his song about “Parliament Hill“.
This is his description of the inherent culture and reality of Saskatchewan farm trucks.
Joe and I have been there and done that enough to know every word is true.
Also applies to Alberta, British Columbia, and pretty much every dirt farm and dirt farmer in existence:

The Shanty Boat
Joe dreams of a simpler life.
The Moron Brothers, Lardo and Burley, from Kentucky, have cornered the dream.
It didn’t surprise us that The Moron Brothers have their own YoubeTube channel:

River shanty culture has a history.
The Mississippi River has been home to folks for hundreds of years.
Wes Modes and first mate Lauren Benz decided to build a shanty boat from cast-off materials and explore the mighty Mississippi and Ohio Rivers.
A re-discovery of the lifestyle of American river dwellers.
Joe and I would fit right in: