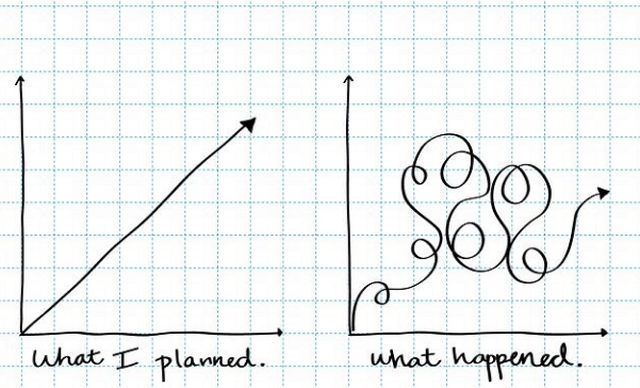 Joe’s Comment – The best part of this week was the solstice.  The days are longer now!  Notice in the above graphic the conflict of chaos and order as traced by my actions this week concluded in progress, but at the expense of time, treasure, and personal effort beyond our expectations (What I planned).
If only I could dance that well!
As my lovely mama used to say, you never can tell….

Tweet o’ the Week
Joe and I don’t know much about “Tweeting”.
You can look up a definition, like this one here.
What Joe and I got from the above definition is that Twitter is an application in real time on the Internet that does a shotgun broadcast of your “tweet” to all of your “followers”.  A “tweet” is restricted to 280 characters.
Our take away is that it is a tool for those who really like to stay current with certain broadcasters and events.  Like texting on steroids.
The POTUS has used this platform brilliantly to by-pass the MSM (main stream media) and distribute his pearls of (280 characters or less) wisdom directly to his more than 67 million followers.  FYI, according to the link, Barry Soetoro has over one hundred million followers.
Of the hundreds (literally) of URL’s Joe and I have bookmarked, there are only two Twitter accounts we visit (not follow – get the diff?).
Those two are James Woods and Dennis Miller (if you’ve read any of our rants, you understand why).
Joe and I had a meeting with the other 35 wackeroos in our noggin and decided, under protest, (it wasn’t unanimous) to post our favorite “tweet o’ the week” in recognition of dry humor, wit, ironic and sarcastic raconteur-erie (280 characters or less), and vicious political vindictive.
Our entry this week is from a tweeter whose nom de plume is “Educating Liberals” – 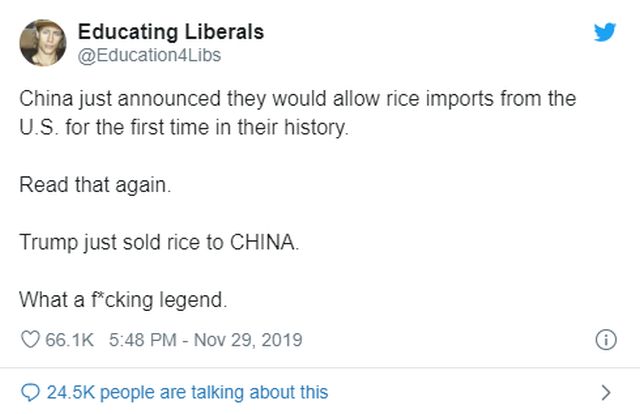 Now that is one helluva powerful tweet!
Tea shot out our nose…..
Gotta admit this short message packs a punch that meets almost all of our criteria for recognition and celebration.  I.e. whatever your opinion of Donald John Trump as a president, as a business man, as an entertainer, as a husband and father, as a sinner or saint, and whether you know him personally or vicariously (does the “6° of separation” theory merit inclusion?) is of little consequence.  The results he produces speak, hopefully with more volume than the POTUS channel, the POTUS meme, in your head.  As Ben Shapiro is quoted as saying – 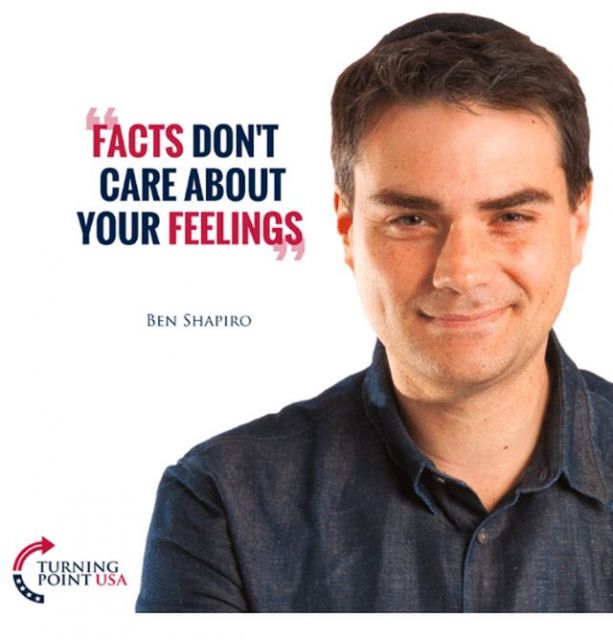 Victor Davis Hanson expresses it in movie terms.  DJT is Shane in the movie “Shane”: the answer to a problem but NOT a virtuous or moral answer.  Necessary nonetheless.
A man who has the skills to solve the problem at hand, but a man who will not be welcome once the problem has been resolved.
Gary Cooper in “High Noon” has a similar utility.
Or, to say it a different way, one of our favorite Yogi Berra quotes, which might just undermine some of the so-called “logic” in yer head that makes bad choices – 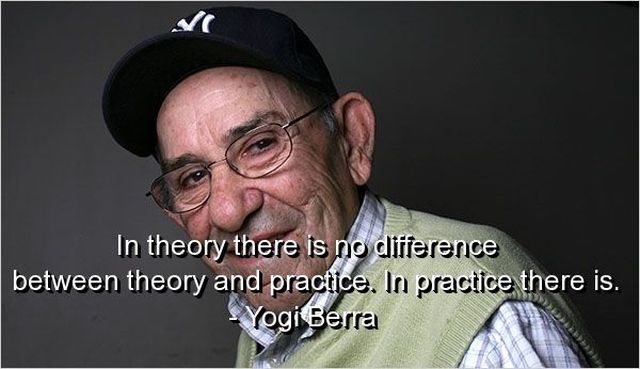 Blue Collar Logic
Jason Siler provides some damning evidence that (in a sane world with a level playing field) incriminates Joe Biden (aka Quid Pro Joe), Joe’s son Hunter, and the Obambi administration.  Along with a large supporting cast.
Indeed, Joe’s campaign bus motto should be changed as Jason suggests:

Dave Morrison of Blue Collar Logic chimes in with his assessment of the propensity Democrat strategy has historically gone “A Bridge Too Far” (WWII Operation Market Garden – a tragic failure of General Montgomery’s hubris).
Mr. Morrison and I and Joe too, have similar thoughts.  Well spoken, Mr. Morrison:

Inspector General’s Report
Joe and I can’t watch any more of the impeachment lunacy.
After the IG report and the Mueller report, there is no impeachment.
Other than a bunch of bullies abusing their solemn office for political advantage.
We hope the whole damn house of cards collapses soon, because to an old man like us it is freakin’ scary.
Why would we say that?
A thorough analysis of the IG Report is available here, authored by Glenn Greenwald and posted to The Intercept website.  It is a long and very detailed examination, partisan from the outraged citizen’s perspective.
What the IG Report reveals is criminal activity by the FBI, the DoJ, the “Deep State”, and a media complicit in the obfuscation of facts or the generation of outright lies.
This show isn’t over.
Very scary that the entire government is losing credibility and the “Dark State” is furious about the coming unmasking.
Hence we (Joe and I) invoke the Stefan Molyneux clause.
An hour of his excellent research team’s findings:

Rex Murphy and Conrad Black
Joe and I love the Internet.
How else could we enjoy an hour conversation between Rex and Conrad without leaving our desk?
I say as long as the voices of men like these are not stifled the future looks bright.
Joe says I’m a dupe.
Either way, this is a lovely conversation:

Ayaan Hirsi Ali
Joe and I haven’t made disparaging remarks about the insanity of Islam for months.
Our opinion has not changed despite our silence.
Current stats on the foaming at the mouth rabid Islamic Jihadis running amuck in the world are: 36,100 deadly terror attacks since 9/11 (per TheReligionOfPeace website).
We watched an interview by Dave Rubin of Canadian ex-Muslim Yasmine Mohammed, conducted December 2019.  You can see it here.  Joe and I encourage you to take the time.
Yasmine hails from Vancouver BC, and was raised in Canada as a Muslim, and suffered indignities against her physical person, her personal liberty, and her individuality.  She won her freedom; no longer a Muslim, not murdered, living the life.
Joe and I say bravo!
However, the interview was typical of two “Classical Liberals” moaning and pissing about the demise of their liberalism in the real world today, and why it has no teeth.
Joe filed this one in the wastebasket titled “someone should do something”.
They talk the talk, but have no solutions that carry water.
C’est domage.
Joe says it is a form of Liberal genital wart. 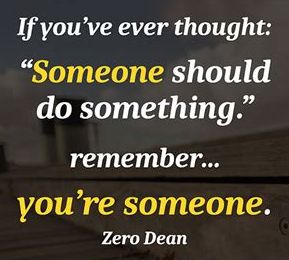 After watching the Dave Rubin / Yasmine Mohammed interview, we had a negative reaction in our tiny pea brain, hence the desire to view more better.
Why did we title this segment of our Sunday Rant after one of our heroines?
Because she is rational, and beautiful, and heroic, and intelligent, and brave beyond Joe and I.
We thought listening to an interview of Ayaan Hirsi Ali would cheer us up and dispel the negativity.
We are posting an interview of her by Peter Robinson of the Hoover Institution.  This interview was recorded April 17th, 2019.
Her perspective on the “Religion of Peace©” surely has gravitas based on her personal history.
Joe mourns her loss of clitoris, for reasons he would gladly discuss.  Suffice it to state that Joe and I are theoretical Libertarians.  We believe a human life starts at conception.  We believe that all humans have inalienable rights.  The adage that “I brought you into this world and I can take you out” is an obscenity whether uttered as a threat or guffawed as a joke.
Here is Peter Robinson applying his usual wonderful interview skills to explore the life of Ayaan Hirsi Ali, her political and cultural perspective, the history of Islam and its animus toward Western cultural norms: