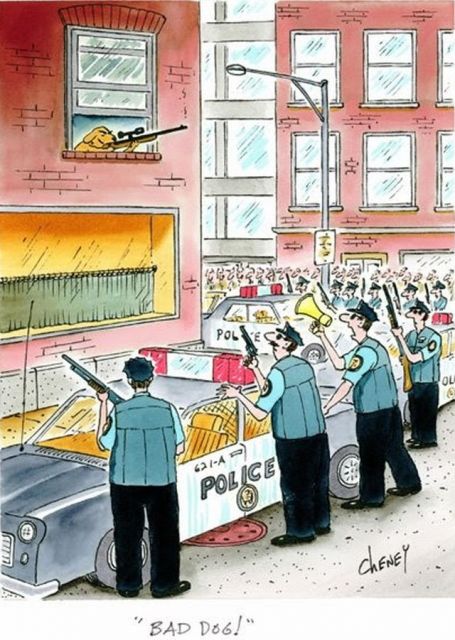 Joe’s Comment – Tom Cheney makes me grin.  Sometimes, especially in nasty non-summer weather, I’m just like that dog.  No explanation possible.  It’s the look on the dog’s face…..  Bad dog indeed!  Another Cheney that makes me smirk, but I can’t explain.  Too many cat videos on YoubeTube? 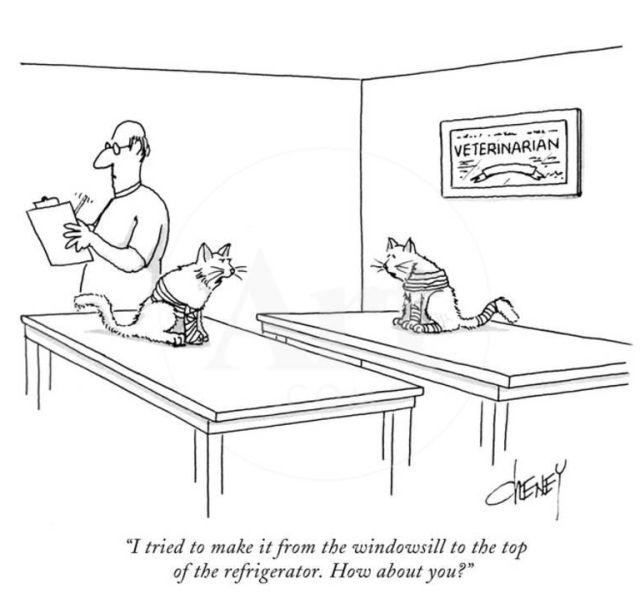 Pearl Harbor
Joe and I, as theoretical Libertarians, are opposed to war and all things warlike.
However, we are NOT advocates (sorry Jesus) of turning the other cheek.
As a man who is not gender challenged, we realize there are only four cheeks we could turn.
That’s four too many.
Continuing along this line of thought, one must be prepared to oppose an aggressor should one materialize.
Like we said, we’re theoretical.
A lesson the Americans learned with blood and treasure lost.
This year, to commemorate the absolute madness of the Japanese attack on Pearl Harbor, December 7th, 1941, we will post three images.
First, an image of the USS Arizona memorial in Pearl Harbor.  Commissioned in 1911, BB-39 was present in Pearl Harbor on that infamous morning.  She sunk when her munitions magazine exploded, taking 1,177 crew to a fiery, watery grave – 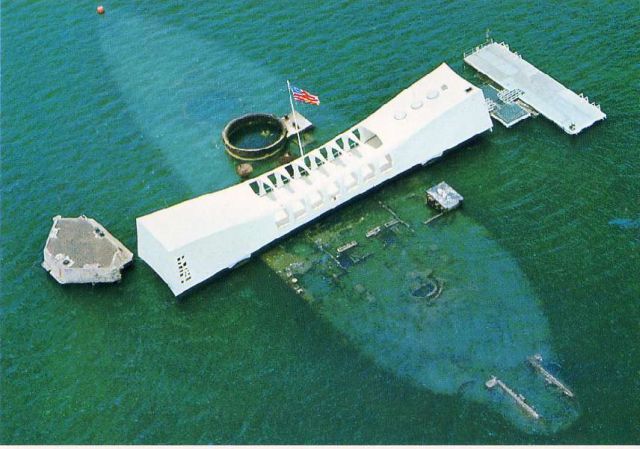 Second, a view of the USS Missouri aka “Mighty Mo“, now a memorial herself ( with the USS Arizona memorial in the background).  BB-63 was commissioned in 1944.  The main deck of Big Mo was the location for the signing of the Japanese Instrument of Surrender in Tokyo Bay on September 2nd, 1945.  General Douglas MacArthur opened the ceremony with this statement: “It is my earnest hope—indeed the hope of all mankind—that from this solemn occasion a better world shall emerge out of the blood and carnage of the past, a world founded upon faith and understanding, a world dedicated to the dignity of man and the fulfillment of his most cherished wish for freedom, tolerance, and justice.”  Mighty Mo fought in Iwo Jima and Okinawa, later in Korea, and finally in Desert Storm in 1991.  The longest serving battleship in U.S. naval history – 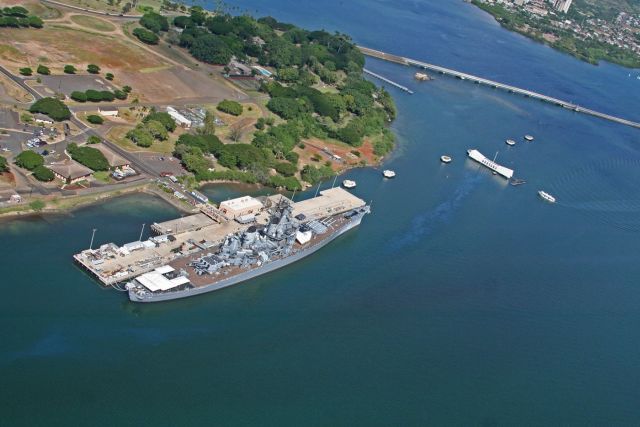 Finally, with all the humor and irreverence Joe and I can muster, some wit’s meme – a well known photo of Emperor Hirohito, with comment, post dated December 8th, 1941 (one day after the attack) – 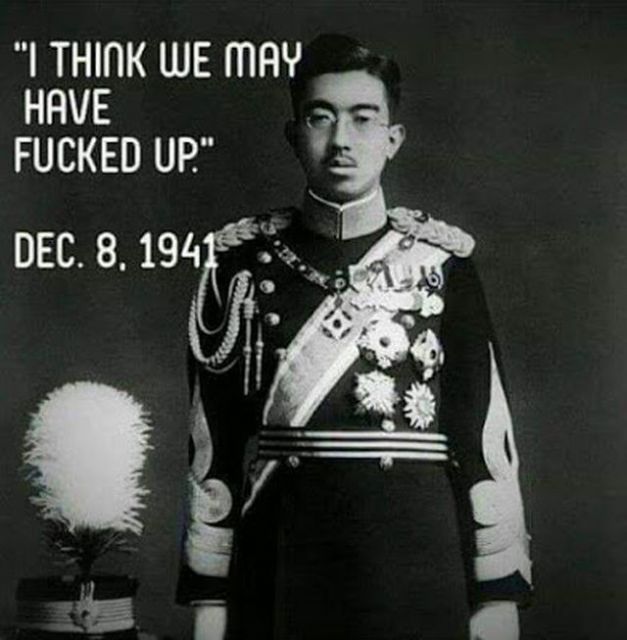 Joe and I are sipping Dark Horse whiskey, toasting the brave and valiant and honorable dead.
And praying for the end of madness.
Enough said.

Replacement Migration
Joe and I abhor the United Nations for just this sort of globalist tripe: “Replacement Migration“.
What sort of gibberish is this?
The “Replacement Migration” mandate says for countries with declining birthrates the solution is not to celebrate the decline or reverse the decline, or learn to live with the decline, no….
The solution per the U.N. is to bring people from areas of the earth where the birthrate is high (or unnaturally stimulated).
Joe and I have thoughts.
We live in Canada.
The average I.Q. in Canada is ≈ 100.
Joe and I believe that I.Q. is an important factor in “quality of life” forecasting; i.e. extremely low (below self reliant) I.Q. citizens are more likely to be wards of the state, reliant on social programs and welfare and benevolence at a national, provincial, and community level.
We think that immigration should be limited to those with an I.Q. equal to or greater than the average I.Q. value of the culture being “enriched”.
We also think that to vote in a country you must have citizenship, be free (not incarcerated), pass an “awareness test” (i.e. what are the parties, what are the platforms, what is the history of the country), and have an I.Q. equal to or greater than the average I.Q. of the people in the voting bloc.
What possible advantage to a country, especially a Western culture country, is importing lower than average I.Q. people from an alien culture that doesn’t speak the host language?  How will they survive unless they bring great wealth with them?  Why would you poison your economy this way?
Joe and I have thought for years that the best way to improve the poorest nations (choose a metric for measuring “poor” and we’ll play along) is to inhibit their best and brightest from emigrating.  The best and brightest are needed in their native countries.  Intellectual flight to the West only exacerbates the distance between the “have and have not” countries and cultures.
If you must bleed from the heart, let your brain in on the bleeding.
Send aid with controls and accountability, AND a plan for repayment.
There must be an old adage that reinforces the idea that what you earn has more value than what you receive by charity.
A young teacher, Charles Robertson, has decided that the globalist plan is madness, and it is NOT based on logical thinking.
Here is his presentation (how long will he have a job?) called “Irreplaceable”:

PragerU
Gosh!
How the time(s) flies!
One year to the next presidential election in the good ol’ U.S.A.
Joe asks me, when, if there ever was, did a Democrat make sense to you?
Well Joe, I said, depends.  And not the adult diaper, either.
When I was a boy my father asked me to listen to a politician make a speech on the black and white 19″ TV in our living room.  Can’t remember whom, or even when.  I was maybe 17 years of young.
Dad was disgusted.
He said I didn’t get that the man was lying through his teeth.
What I remember is he was spouting platitudes that no one could disagree with or argue against.  So I told Dad the man made sense.  What I didn’t say was the man offered no substantive reality, i.e. sounds good but how does that reflect life around us?  I wasn’t very sophisticated at 17.
Joe says I’ve gone down-hill since.
The Democrats are dragging all the old dead horses out; they’re digging up all the old tired corpses; they’re charging the electric paddles to zolt the zombies back to life:

On cue, as always, ad infinitum, the spectre of “voter suppression” and voter ID is dancing on the Dems platform.
Here is Jason Riley of the Manhattan Institute to set the record straight with data, facts, and reason.
Joe says it’s too damn bad the Dems don’t acknowledge THE FACTS, only THEIR facts:

POTUS Redux
Joe and I took a great interest in this interview of Doug Wead by Jan Jekielek of American Thought Leaders.  Mr. Wead is an historian, and has recorded the thoughts and statements of six presidents.
In the interview you will hear Mr. Wead describe his bemusement at receiving death threats against himself and his family.  For what you may ask?  The death threateners were trying to force him to NOT publish his book describing his interviews with President Donald J. Trump and his family.  The book is called “Inside Trump’s Whitehouse”.
Joe and I will be reading this book, maybe a Christmas present to Joe from Dave.  Or, if that tightwad Joe would spring, from Joe to Dave.
In my dreams…..
This interview may perk your interest, too:

U.N. C.O.P. 25
The United Nations continues to muddy the waters of understanding for the cogent, logical, realistic world inhabitants who rely on the U.N. to live up to the original agenda and commission of its existence, and give the U.N. authority based on that fact.
In clearer terms, forget politics and manifestations of a global governance scheme where the U.N. or some mutant U.N. offspring controls the wealth of the world.
Joe says let those who create the wealth have that privilege.
Our hero William Happer speaks at the COP 25 hoedown in Madrid, December 2019, and lends reason to the hysteria about the “gas of life”, carbon dioxide:

Further, after his presentation, Dr. Happer discussed the results of his one year commitment to assist the Trump administration with some technical problems (i.e. “hardening” the electrical / electronic grid) and by his insistence, an overview of climate and the government’s role from that perspective:

Fasting
Joe and I have gone as much as 4 days without eating.
The longest recorded fast to date is 382 days, under strict medical observation.
Canadian liver specialist Dr. Jason Fung has used fasting as part of a low carb dietary regime to cure type II diabetes as well as help patients reduce weight.
Our experiment with diet continues.
In the months since August we have re-introduced certain vegetables, some limited carbohydrate intake, some alcohol (the odd (and even) beer with friends).
The result has been a gradual increase of weight.
Damn!
We’re so efficient that every extra (beyond operating requirement) little morsel we consume is stashed away as fat.
Time to take a Dr. Fung fast time out.  Or is it a time out fast?
Either way, the ever so clever Mr. Wilder (  Wilder, Wealthy, and Wise  ) reports on his 2019 experiment that delivered excellent results here.
Of course a humorous meme or cartoon is always appropriate (from the above link) – 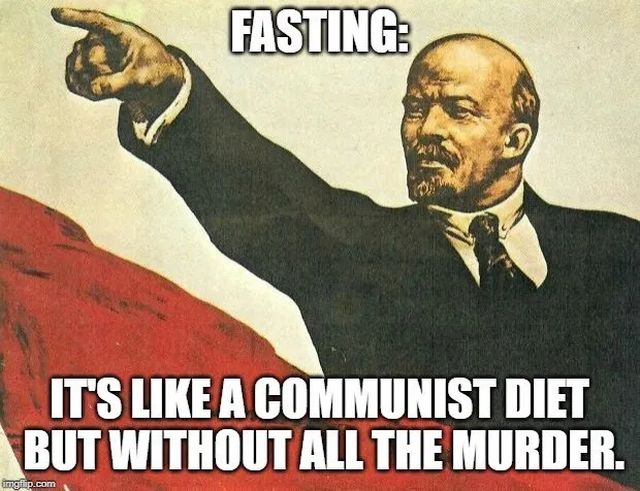 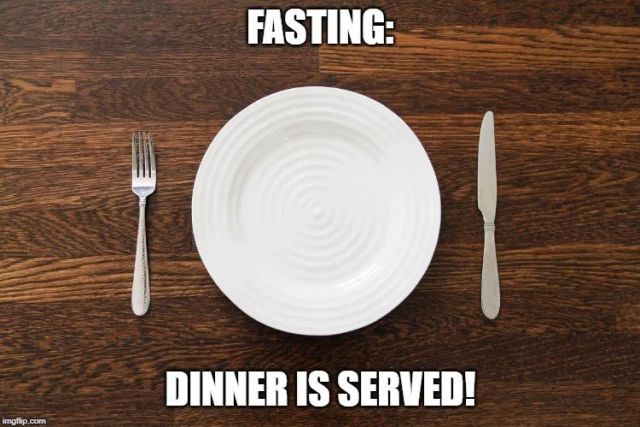 As Dr. Fung says, unlike other diets, fasting can be done anytime with no preparation required and no clean-up needed. 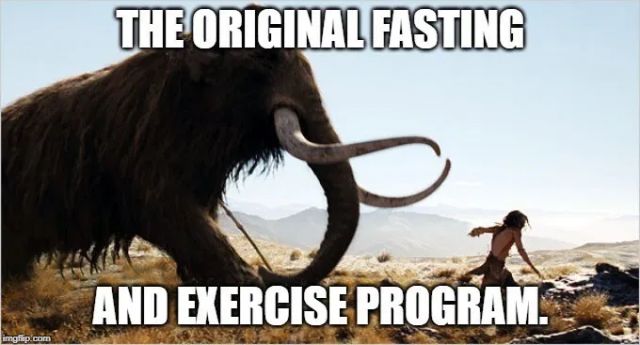