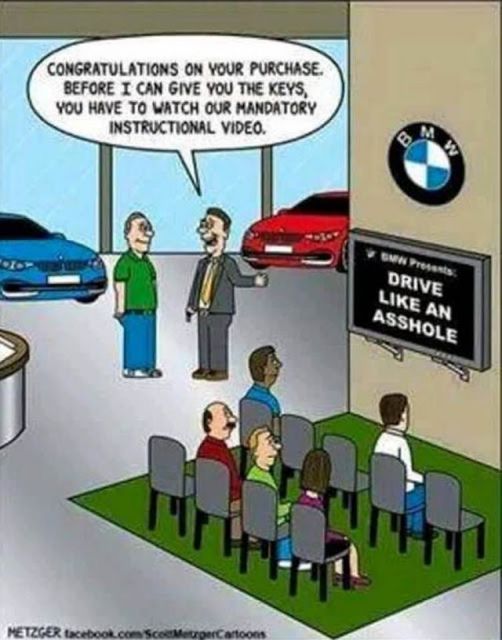 Joe’s Comment – I just finished a 2,379 km. trip towing a trailer loaded with a vehicle for ¾ of the distance.  I drove inter-provincially on the highways and in big city traffic of Edmonton and Calgary.  A few thoughts on the driving experience…..
I think that a person should not be issued a driving license until they have a one week ride along with a professional truck driver in a big rig.  Having done that long haul thing in a heavy truck I have witnessed some of the most pathetic excuse for driving there is to see.  I’ve also been driving for 56 years.
The above cartoon might not be a fact (a training video) but all in all the sentiment rings true.  You might have your own ranking for matching terrible drivers to vehicle brands, but you must admit the BMW crowd occupies a front row seat.
I don’t usually criticize the behavior of others: self deprecation is a more acceptable method of communicating certain sentiments.
However, in this instance, I approve of this cartoon.

Prager U
This short video addresses the problem small business owners have with excessive or unnecessary regulations, or discrepancies between competing government regulatory bodies.
The life of a small business owner is no easy path.
In the U.S. over 60 million jobs are with small businesses.
Simple logic would dictate that fewer, necessary regulations pinpointing health and safety, combined with existing criminal and civil laws of conduct would suffice.
This alone would make it possible to re-invest the monies saved not dancing to frivolous and arcane regulatory tunes.
9 out of 10 small businesses would have an improved chance at surviving the competitive landscape if it were so.
Unfortunately, logic cannot compete with government bureaucratic bloat; the innate survival reflex of every government entity.
It goes like this: once the bureaucracy is spawned it re-focuses within one budget cycle on survival; the job it was created to address becomes secondary.  There is safety in larger budgets with more employees.  A fact of government bureaucracies AND large private business too.
Take the time to watch and listen while Joseph Semprevivo, CEO and owner of Joseph’s Lite Cookies, explains how government regulation hinders his business objective – to make cookies:

Blue Collar Logic
One of this week’s offerings from Dave Morrison:

Another from Mr. Morrison commenting on President Trump’s decision to remove troops from Syria this week:

This Candace show is a lovely exchange between Dan Crenshaw (Republican – Texas) an ex-Navy Seal and Candace, about the culture, the tensions, and the goals of modern conservatism:

Joe’s Garage
F68 One Ton
Last year Joe and I traveled with Bob G. to Chauvin AB to visit Joanne, Daryn, Nathan, and Greg on their farm.  Beside a social visit, Joe and I made the trip to trailer home an M155 Mercury 3 ton truck Joe and I bought from Daryn’s dad Melvin.  You can see some pictures in previous Sunday Rant episodes: Sunday Rant – 3118, Sunday Rant – 3018.
While en-route from the farm to Vernon with the Mercury last year, we stopped at Provost AB to fuel.  As we fueled and checked the load, a young man (younger than our 69 years) approached us and struck up a conversation.  Neil D. owns a farm close to Provost and told us that he had a similar looking old truck abandoned on his farm, and were we interested?
Duh!
Long and short, Neil parted company with the truck.
Daryn was kind enough to haul it back to his farm in Chauvin until we could retrieve it.
On Thursday this week Joe and I set out to meet this new (to us) truck we had never seen in person.
Our route was Vernon to Edson AB to deliver a Ford Escape for Lyle P., then on to Edmonton AB to overnight.  On Friday, drive to Chauvin, visit with Joanne and the boys (Daryn was busy with harvest trucking – late this year due to weather), load the truck, then on to Calgary to overnight with Bob G.   Finally, on to Vernon on Saturday.
We are pleased to report that schedule and route and timing plan worked flawlessly.
Other than getting confused in Calgary as night descended.  We confused Crowchild Trail in our mind with Stoney Trail.  We couldn’t find Bob’s house off Stoney Trail for the simple reason it isn’t.  Joe says he didn’t do it, it was me.
My only excuse is I was tired.
Here’s a picture of the truck, trailer, and Ford F68 (one ton) in our yard in Vernon BC late Saturday afternoon – 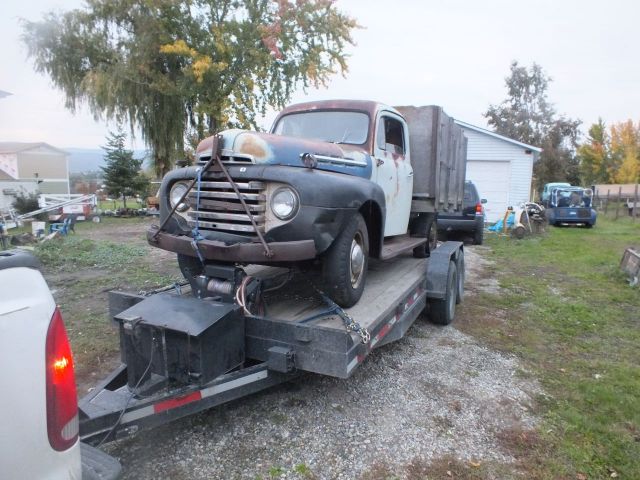 In the above photo you can see (barely) the 1950 M155 Mercury to the right of the shop in the background behind the 1949 Ford F47 (blue).  Another picture of the new member in our old timers club, still on the trailer – 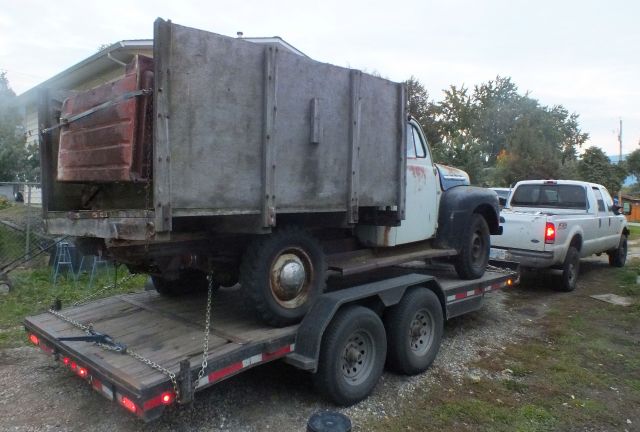 Our first impression was WTF did Joe do now?
Another old Ford that has been used and abused and abandoned to a rusty death on a farm in the cold dark frozen Canadian north.
Joe said right!  It is our duty.  Anything else is unimaginable.  And unthinkable.
F.Y.I. – Joe wants to collect one of every Ford ever built.
Good luck on that one Joe.
Since getting home, we have had a chance to look over the old girl.
She is a gem.
This girl is an F68 – a one ton truck. 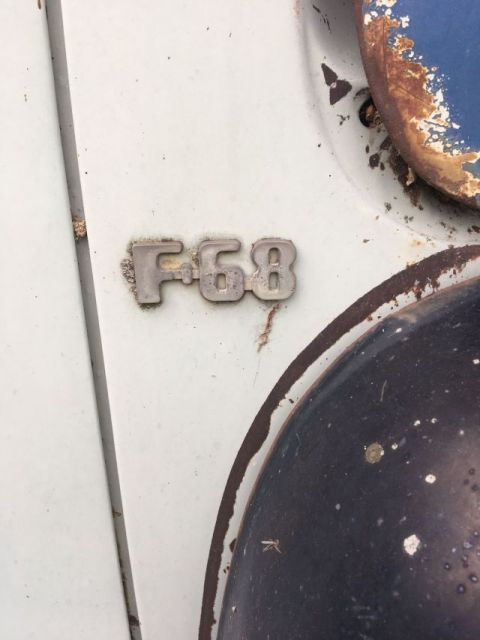 With a bonus!  There are two knobs on the dash left of the steering wheel.  That is an indication of extras such as throttle control and/or power take-off – 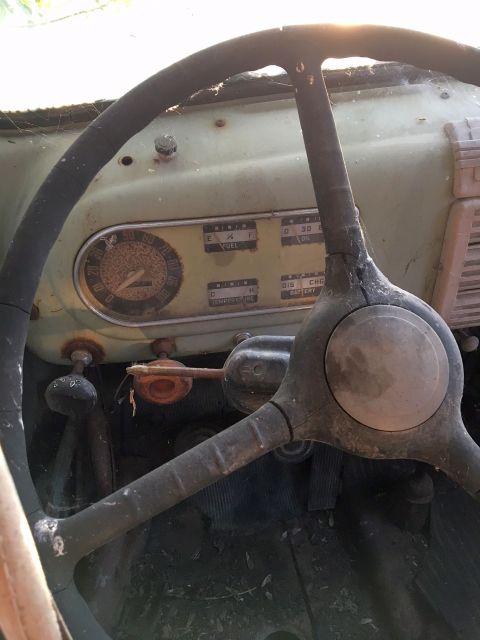 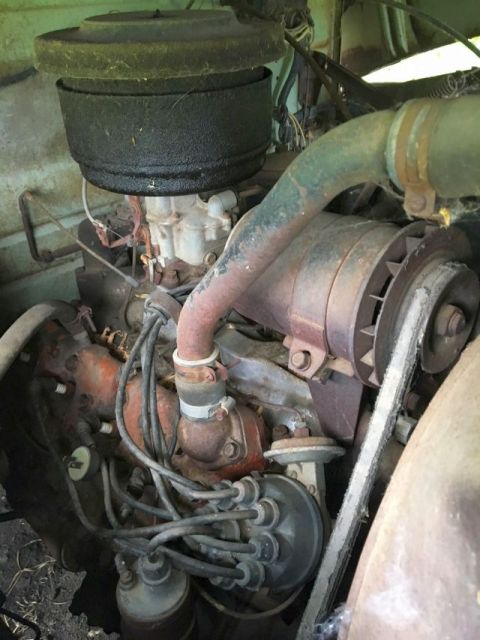 We are both, Joe and I, leaning toward this particular truck as our “project de jour”.  A number of reasons sway our favor to this truck:
1.  the wheels are 8 lug on a 6.5 inch bolt circle – that is the same on Ford up to 1998 – so replacing the split rim wheels on the truck will be cheap – we already have a selection of viable wheel/tire combinations.
2.  we have a mid ’60s dually axle that will fit which is also 8 lug on a 6.5 inch bolt center.
3.  the Anthony Motor Truck Bodies Hydraulic Hoists is a period piece of hardware – we are excited about the prospect of re-building the system.
4.  we have spare parts for engine and cab assemblies which will allow us to build a stock truck with minimal expenditure.
5.  parts not on hand are available from numerous vendors who service the vintage/classic vehicle market.
6.  a one-ton truck with a tilt box will be a useful addition for finishing our backyard landscaping.

Joe is already wheeling this truck around town in his head.  I bring to his attention the other 30 or so “projects” in the yard in various stages of completion.
Joe says don’t be such a party-pooper.

Many thanks to Joanne, Daryn, Melvin, Bob and Barb for your consideration, help, and hospitality.  And a big hug to the boys Nathan and Greg.
It was a fun trip with no complications, break-downs, or bad weather.
Northern Alberta is beautiful in autumn when the leaves are turning and the ground is still visible.  And Melvin has many more treasures in the long grass – 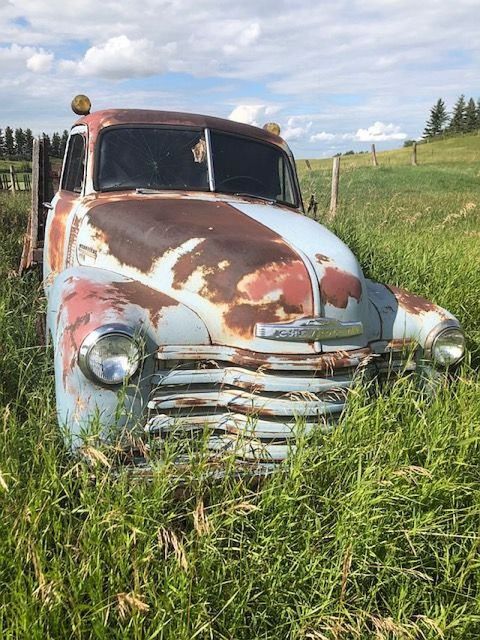 We’re already planning our next trip, next year.