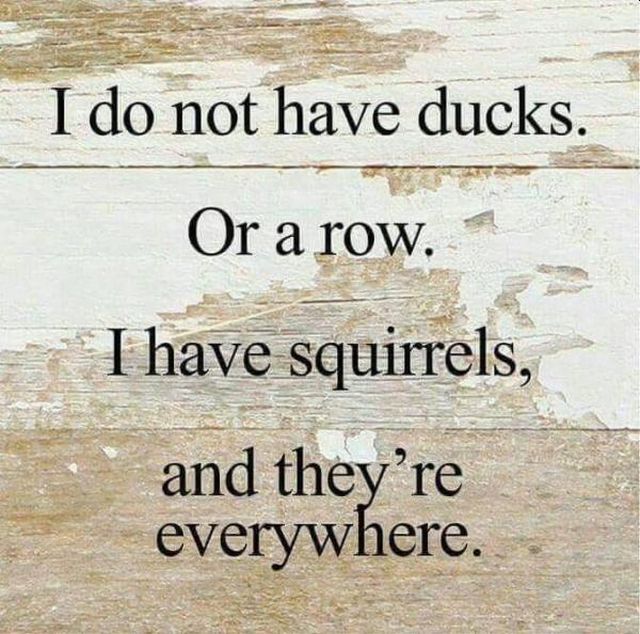 Joe’s Comment  – It is inevitable when you have 37 people in your head, only two of which you let out to play.  Life is grand.
And complicated.

Chief Rainbow Socks Redeux
Brownface.
Blackface.
He’s too ignorant to have red face (as in embarrassment).
Whatever you think about Stefan Molyneux (Joe and I think well of him) there is no arguing his research is thorough and his research department is damn good at researching.
After you watch the following video of Mr. Molyneux documenting the creation, the rise, and the turtle-on-a-post blunders of (who Joe and I dis-affectionately often refer to as) “Little Gay”, you may just feel a tiny tug of pity in yer heart.
Joe and I don’t.
Get the poor privileged trust fund S.O.B. off the Federal political stage.
He’s a rarity: dangerous because he has ample hubris, his face a store front for an egocentric not-so-high IQ, and has his hands on the controls of a country where the power of the PM (within the country) exceeds the power of the POTUS (within his country).
Stefan Molyneux with “The Sad Crazy Story of Justin Trudeau’s Blackface”:

Blue Collar Logic
Joe and I continue to appreciate the well grounded and sensible comments on “the culture” from Jason Siler and Dave Morrison, co-founders of Blue Collar Logic.
They will be a frequent inclusion in our Sunday Rant.
Here’s Dave Morrison with his definition and perspective on “Word Traps”:

And here is Jason Siler offering some advice to the progressive’s latest shame(r), Greta Thunberg:

Joe and I are with Jason: this child’s parents should be charged with child abuse.

Prager U
An exposé of Federal Dietary Guidelines.
This information has been disseminated via this Sunday Rant in previous iterations, by others – scientists, enthusiasts, medical experts.
Cardiologist Dr. Bret Scher explains what the hay is going on:

Joe and I agree wholeheartedly with Dr. Scher’s conclusion: take control of your health and find out what diet works best for YOU.
In Joe and my case, for US.
Let there be dragons!
Roasted on a spit over a roaring flame.
Yummy!

Jericho Green
This week (on Tuesday, September 24th) Donald Trump addressed the United Nations.  Joe and I (and all our other us’s) paid rapt attention.  You can watch it here.  We loved the message(s).
I’m sure Jericho will have something to say later today (Tuesday) or tomorrow.
On Monday, the UN had a “Climate Summit”.
Joe and I are with Jericho Green’s analysis about climate and the pushers of that false narrative (human causation):

Joe’s Garage
Boston Dynamics
Over 5 years ago we posted a link to a video of a Boston Dynamics military robot with 4 legs that was designed as a pack “mule” for support of ground troops.  It was called LS3:

The machine was noisy (used a gasoline engine for power), clumsy, slow.  It also scared the hell out of Joe and I.  This is NOT an innocent “what will they think of next?” kind of development.
Zoom forward a few more years and you get Atlas:

The damn thing is more agile than most humans.
We hope and pray that this is funded by the American military.
Any other country and we would make doo-doo in our panties.

Terrace/Kitimat Saga
Joe and I are a little late for mid-life crisis.
However…..
The siren call (or should it be Siren call?) of adventure caused us to break the bonds holding us in Vernon.
On September 26th we left the Okanagan for Terrace, B.C.
Call it a late-life crisis.
Here’s where Joe and I were on Thursday morning, somewhere on the Mabel Lake Road 30 km. east of Enderby, BC – 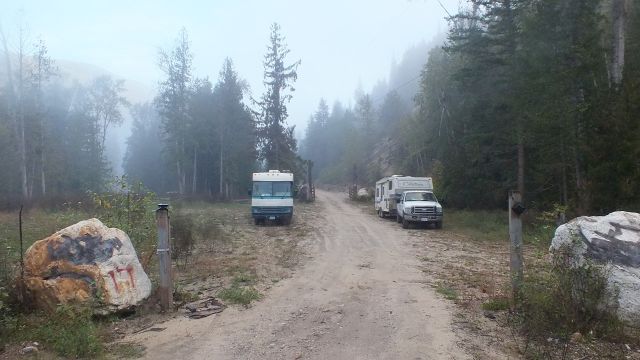 A nice spot, 10 acres owned by my friend Lorilee T., the instigator of the Kitimat Expedition.  Another picture showing the ingenious load management skills of moi – 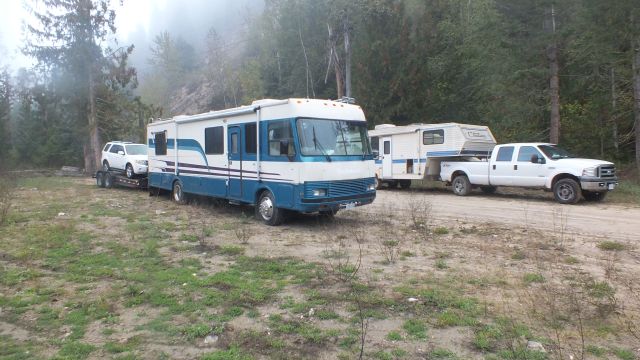 The fifth wheel trailer is financing the fuel bill for the trip – Lorilee sold it to a fellow adventurer in Terrace.
Ava, the RV, is a hot rod.  She sports an 8.3L Cummins engine (originally a 5.9L Cummins that shit the bed) and an Alison MD3060 World Transmission.  She also has a stout receiver for towing.  How handy!
A slight detour to OK Tire in Enderby to get pumped up (thanks Arnie), and it’s off and driving for Kamloops.  We stopped at the Kamloops truck stop for a quick assessment of load security, peeing, and procurement of snacks. 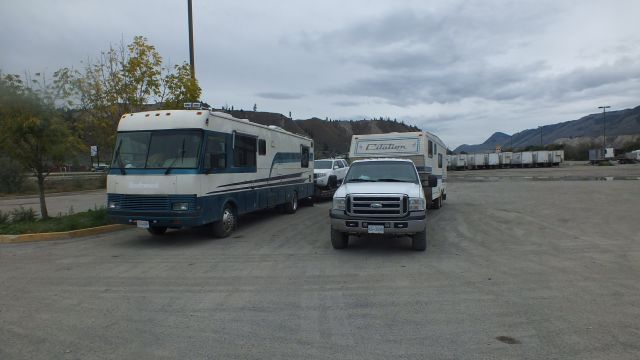 Then it was on to Prince George for the first day’s terminus.  In the morning, it was still not sunny weather – I didn’t bother with a picture of cold, cloudy, rainy.
Friday evening saw us in Terrace, BC.  Late afternoon, about 5:30 p.m., we checked in to the Braun Island RV Park.
First, Joe untrailered the Escape.
Second, park the trailer, then Ava, the Rockwood motor home, was parked beside, in slot 42.
Third the 5th wheel mobile trailer was parked in slot 40, and the F350 in front of the motor home.  This is what it looked like – 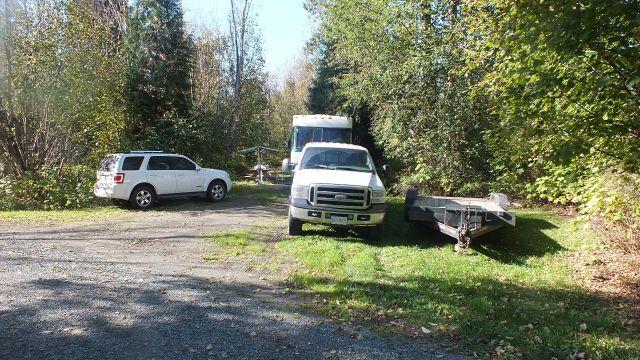 Next two days we cruised around, re-provisioned, and visited Kitimat.  Lorilee’s ultimate work destination (she is a heavy equipment operator).  The LNG pipeline, smelter expansion, and mega project projections project out 10 years.
More next week.
Joe and I might even have a surprise or two to reveal.
For the record, we have had two days of sunny skies in a row.
Don’t know if that is a record in Terrace.
END_OF_DOCUMENT_TOKEN_TO_BE_REPLACED