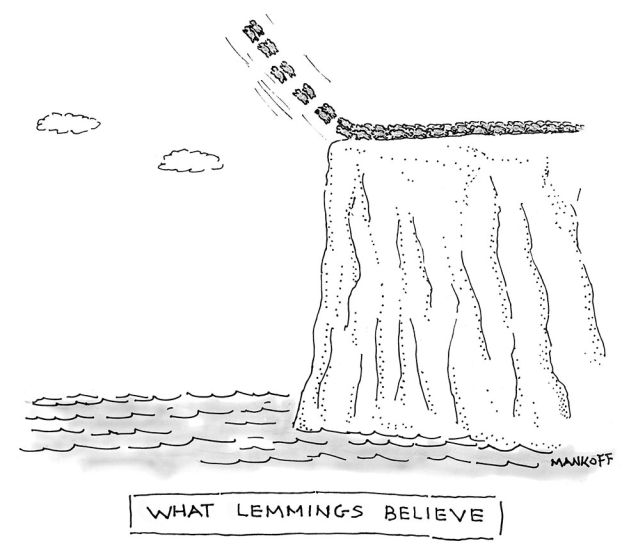 Joe’s Comment – What would life be like without belief?  I suspect it would be as bereft as Spring without hope.  Or pizza without beer.  Damn grim….

Canadian Political Tragedy
The Federal election in Canada is no longer a distant interminable time away.
It is upon us (aka We The People© – Canadian version) in a couple months.
Alas, the identity of We The people© (Canadian version) is not that of our formative years, “our” being Joe and I (and the dozens of others in our head).
The Saad Truth is Maxime Bernier is going to divide the conservative/libertarian vote and hand the control of Canadian Parliament to the Liberals again (worst case) or to a minority Liberal government (also worst case).
Mr. Bernier’s rationale is the Liberals and Conservatives are so similar that it is they, not he, dividing the vote.
Maxime Bernier as a candidate is no Donald J. Trump.
That is, he cannot survive without the support of the party machine.
None of the Canadian wannabes is a Donald J. Trump, even should they wish it so, in their wildest dreams.
The reality in Canada is the disparity of the east vs the west is ever more magnified.
For Joe and I our poorly formed political acumen is in panic mode.
We see no light in the tunnel, not even the headlight of a mighty locomotive.
We do hear crickets.
The beat goes on:

The CCP and Thee
This interview is with Guo Wengui (aka Miles Kwok) a Chinese businessman living in the U.S.A. as a political refugee; he has asylum.
He is described as the “infamous” Guo Wengui, a Chinese exile.
He is an enemy of the Chinese Communist Party.
The CCP has been trying to murder him for years.
Joe noted the “undisclosed location in Texas” is an aircraft hanger with a beautiful private jet (Citation?) standing by.
What this man is saying in concert with what Steve Bannon is saying (Sunday Rant – 3419) if even remotely true is bone-chilling.
A valid measure of tiranny might just be the existence and health of a “middle class”.
A second measure obviously is the concentration of wealth, and where the wealth is concentrated.
This video is difficult to follow due to the poor English/translation.  Or Joe and me not understanding Chinese.  As Mr. Wengui says, his “Chinglish”.
Well worth the time to watch:

Not convinced?
Here’s Steve Bannon with the rest of the story.
Much better English.
Same hanger (same beautiful aircraft).
Same interviewer, Kyle Bass of Real Vision Finance.
Most probably same day (Kyle’s wardrobe, car in hanger hasn’t moved, nor has the aircraft, same stools).  Only question is what order were the interviews done.
Geopolitics explained so the Dirt People like me and Joe can understand:

WWII Anniversary (?)
The start of WWII is generally considered to be September 1st, 1939.
The following documentary is an overview of the events leading up to World War II.
Why bother watching?
Joe says that Jordan Peterson has confirmed our deepest fear; that the horrors of mans inhumanity to man requires individual men (and women damn it) participate, willingly or not.
Very bad very obscene behavior is not beyond the ken of each and every human.
Our experience is that it takes supra human control by every individual to NOT succumb to the “forces of evil”, especially when the size of the mob is critical.

Blue Collar Logic
A recent reflection by Dave Morrison about the catalytic effect (and affect) one Donald J. Trump has on all the visible and hidden pieces on the political chess board:

Jericho Green
This week Mr. Green has been prolific: a new proclamation each day.
This is one of the most passionate, most focused, most pointed of the week.
Joe says you will like it!:

Passion, Meet Reality
Joe wonders why, when the hysterical modern feminists howl about unfair and disproportionate ratios of females in male dominated disciplines, these same feminists ignore women like Michelle Sterling of Friends of Science.
Ms. Sterling tells about the unsung heros of the world: the men (and a few women) who invent, build, and maintain the infrastructure, the products, and the medicine which makes our lives so much more rich, rewarding, and prolonged.
Passion, meet reality is spot on: