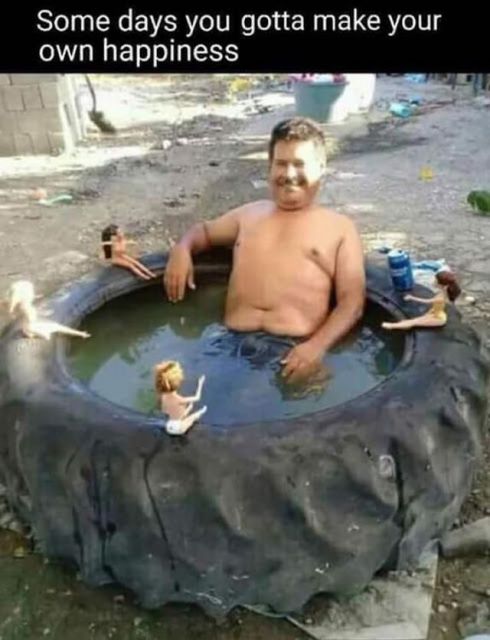 Joe’s Comment – Between cartoonists and We The People’s sense of humor, I laugh out loud every single day.   This dude’s smirky grin leaves me speechless.  As ZZ Top puts it, they got a lot of nice girls there:

Gun Rights – A Passionate Speech
Joe and I have seen this video many times over.
We have never included it in our Sunday Rant.
This will fix that.
A video from April 7th, 2018 at the Greensboro TN city council meeting, shortly after a mass shooting.
Politicians – Federal, State, (National, Provincial), city, community – all feel a need to do something.  Do anything.
It never dawns on them that if there were a solution, it would have been implimented.
Furthermore, the only “solutions” are theoretical: Yogi Berra time (In theory there is no difference between theory and practice. In practice there is).
Explanation below in “Our Take”.
Generally speaking, from our years of observing politicians in action, they do the wrong thing by compelling the only people who listen to them to limit their freedom.  Because criminals don’t listen, don’t comply, don’t care.
For all that it matters, no one listens.
Mr. Mark Robinson tells it like it is.
A well spoken passionate diatribe:

Gun Rights – A Thoughtful Analysis
Daniel Greenburg talks about the elephant in the room re: gun control.
Two words, starting with the letter “C” (not the “C” words that Joe uses so profanely) offered as a theory.  A long, written analysis as proof.
Both from pundit Daniel Greenfield at his website Sultan Knish.
The words are “CRIMINAL” and “CRAZY”.
You can read his article here.
A teaser passage from the article –
“There are two ways to cope with mass shootings and killings.
We can work to turn our societies into giant prisons in the hopes of impeding that 0.1% of the population which is inclined to violence over drugs, deranged fantasies or the Koran from shooting up malls, ramming cars into crowds, setting off pressure-cooker bombs or flying planes into skyscrapers.
Or we can get rid of that 0.1% and actually have a free and safe society.
We’ve tried turning our country into a giant prison while failing to protect our borders, crack down on gangs or stop the psychos. And the experiment has devastated virtually every major city, cost tens of thousands of lives, made flying miserable, and brought our country to the brink of destruction.
Maybe we ought to try common sense instead.”
Joe and I place this well argued analysis by Mr. Greenfield in the nice try but impossible catagory.
Institutionalizing has been tried.
It failed.
For reasons Joe and I explain below.

Gun Rights – Our Take
Joe and I will now expound on the dynamic duo mentioned by Mr. Greenfield (crazy and criminal).
In the days of our youth, Joe and I remember mental institutions in our world.
Mental health issues are a family and friends reality.  What happens if the problem is larger than the capacity of a family (we’re talking nuclear family, friends, community)?
Enter the government!
As Calgarians, the closest large government controlled mental health institution was in the town of Ponoka AB, called the Alberta Hospital (for the Insane), it opened in 1911.  A variety of now abandoned procedures and practices were de rigueur, including the new (at the time) practices associated with the ideology of eugenics.  The Blair Report (1967 – released 1969) precipitated legislation which resulted in Alberta leading Canada in de-institutionalizing care for mentally disabled persons and adopting a community based model.
note: the above links are to a Canadian eugenics history website, and as such focus on the practices and procedures of the ideology of eugenics.  They ask the profound question: What sort of people should there be?
Joe has a mouth and mind full of answers to that question, some of them repeatable in polite company.  In the above links, we found W.R.N. Blair’s conclusions about I.Q. and mental health (re: Indian and Métis people) very interesting.
For Joe and me as young impressionables, there were always kids in our classes who were clearly unable to master the simple tasks-at-hand, such as reading, writing, arithmetic, or the nuances of social interaction.  We called them retards.  Not to their face.  That wouldn’t have accomplished much at all positive.  Especially for Joe and me.
As an old man, Joe and I observe that the pendulum of compassion has swung so far to the weeping bleeding prostrating heart nihilistic left that the streets of Los Angeles, San Franwacko, Portland, and even our little piece of heaven (Vernon, BC, Canada) has a(n increasing) population of persons who do not follow the norms of society, or acceptable societal behavior.  To reference the Founding Fathers, these people are neither virtuous or informed.  Some of them are retards…..
By the by, the early 20th century categorization of mental capacity in relation to IQ was moron (51 – 70), imbecile (26 – 50), idiot (0 – 25 IQ).  The link is to a summary compiled by Campbell M. Gold in 2011 (very peculiar read!).  He also comments on the catagorization used today –
“Today the classification system has been made one category broader, and the moron, imbecile, and idiot distinctions have been replaced with “mild”, “moderate”, “severe”, and “profound“retardation. Moreover, diagnostic factors, in addition to “IQ”, are also employed when classification is made.”
Which would be fine and dandy if IQ were the only measure of mental health.
The fact?
Mental health is an issue for the idiot (profound retardation) and for the genius/near genius (IQ 150+), and for every living soul along the way.
So much for the crazies.
What about the malevalent; the terrorists and criminals?
Ideology now enters the calculation, not as a variable but a constant.  That is, a constantly variable something.  Ideology is often represented as a “logical solution”.  It is nothing of the sort.  Ideology is emotional tsunami-ism.
An Islamic terrorist (Islamic because the Koran and Hadith and Surah) has a “logical” and “sane” foundation for his/her/its behavior.  The case for sane and logical rests on some mighty shaky ground.  Or mighty stable ground: where, oh where can that be?
A run-of-the-mill terrorist likewise has his “logical” argument.
All of the so-called “Lone Wolf™” crackpots, too.
Joe and I tend to group terrorist and criminal together for the sake of arguement; at our peril.
So, what about criminals?
Joe has his own definition of criminals: “a criminal is a free-run socialist”.
Filling his (or, not so frequently, her) dance card at random from the cornucopia of the surrounding culture.
How organic!
note: on many search requests we made (example here via DuckDuckGo), the number listed as a cut-off for “borderline mental retardation” is 70 –  84 or 85 IQ points.   85 IQ points is one standard deviation from norm, which is 100.   Not coincidentally, the average for prison populations is 85 IQ points.  Which is also the average for North American blacks.  Is it possible the political uproar about the incarceration rates of races being non-proportional may be based on a rational fact, a reality?
From studies of prison populations and the correlation/causation of IQ to criminal behavior, a number has popped up: 85 average IQ.  Is it so?  Much argument for, against, undecided.
There is argument that nutrition, environment, genetics, culture and listening to crappy rap music are IQ factors, too.
Joe says if all of those can/do/may influence IQ then they sure as hell can influence behavior.
Much like the description for climate in the 2001 IPPC report (“The climate system is a coupled non-linear chaotic system, and therefore the long term prediction of future climate states is not possible“), Joe will now attempt a semi-plagerized, somewhat paraphrased coinage of a description of the human condition.
Here goes!
“A human is an infinitely complex multi-faceted non-linear organism existing in conscious, sub-conscious, and unconscious dimensions simultaneously in real-time, and as such the accurate prediction of long term human behavior is not possible” – Joe Mekanic.
The motivating force (when behavioral outcome is deemed beneficial) is charitably called “free will”.
When the outcome is condemned (universally or not) great effort is expended to guarantee risk management is zero.  Everybody knows that is not possible.
But an armed citizenry, well trained, equipped with “virtuous and informed” moral ammunition is the most effective risk reduction tactic possible.
So say Joe and I.

Gun Rights – Facts to Ponder
Joe and I stumbled into this video out of the blue.
The YoubeTube algorithm screwed up in a good way, we surmise.
From 2011, an impassioned argument (in a second language no less) from General Peter van Uhm, Chief of Defense of the Armed Forces of the Netherlands, explaining why he chose a gun as the tool of his career.
This argument is the only argument which is proven to keep the criminal and crazy and whomever in check.  Implemented with control and checks and balances, in the name of law and order and freedom and liberty, it is demonstrably effective.  Joe hopes eventually affective, too:

Jericho Green
As promised, at least one JG per Sunday Rant.
Joe and I love every single profanity and crystal clear thought.
This man calls it like he sees it:

Prager U
Dennis Prager & Co. are taking on the elephant in the room.
The Prager “501(c)(3)” is sueing YoubeTube.
Here’s the story:

Candace Owens – Andrew Klavan
Joe and I enjoy Candace’s interviews.
We are big fans of Andrew Klavan.
What better way to spend our limited time in this corner of the universal reality than a one hour listen:

CO2 Explained
A numbers approach to explaining the real reason behind the carbon dioxide witch hunt.
Spoiler alert – the Globalist Movement™ has a grand plan.
Globalists and Globalism will not work for the very same reason Socialism will not work.
Once again, with feeling……
The climate crisis isn’t.
Carbon dioxide is the gas of life.
Carbon is the sixth element on the periodic table.
Sneaky shit power hungry globalists should quit while they are ahead:

Rock History
Joe and I were avid Led Zep fans, back in that time.
An early LZ performance of “How Many More Times”:

Joe and I much prefer the LZ studio releases, i.e., the albums we bought on vinyl, on tape, on CD.  Captured our tiny rebel without a clue heart.
We don’t have time for LZ at 70 years young.
However, we DO listen to Pink Floyd.
Especially the recent (2016) Live at Pompeii performance.
David Gilmour is a guitarist extraordinaire.
We are saving up our nickels to buy a copy of the Pompeii DVD:

Unique and Rare
The website “Barnfinds.com” is a fantasy island retreat for gear-heads like Joe and me.
We have a notification subscription so that we can ooooh and aaaah and imagine all we want having the good fortune to see and read about such rarities, much less find one (or more!) in your back yard.
This particular vehicle is unique in all Ford-dom.  The story is an entrepreneur thought putting a diesel engine in a Ford truck might be something FoMoCo would be interested in capitalizing on, so he put a diesel engine in a new ’76 F250.  Before he could pitch the idea to Ford, he died!
Joe says shades of foreshadowing the coming of Hillary Clinton aka Cankles.
The engine chosen was a Nissan/Chrysler SD33 and the transmission a Chrysler 727 – 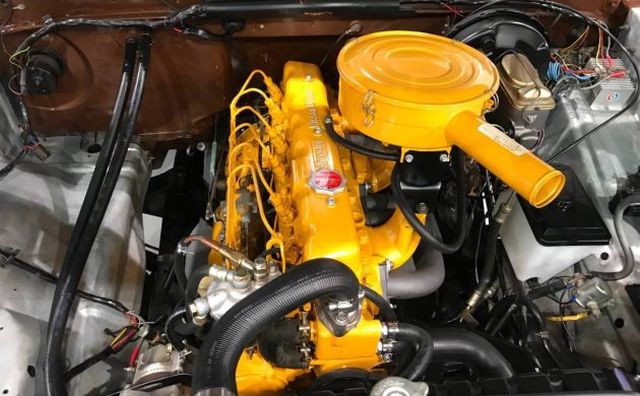 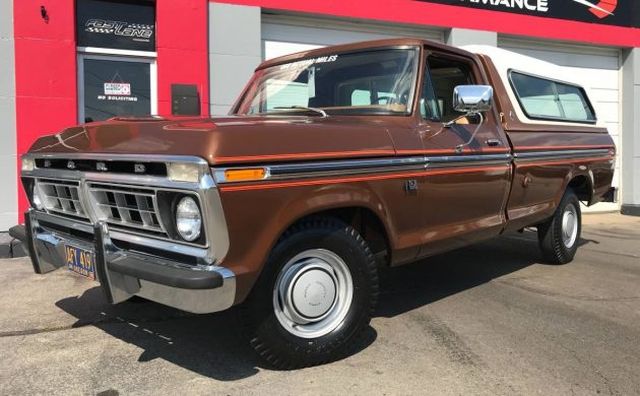