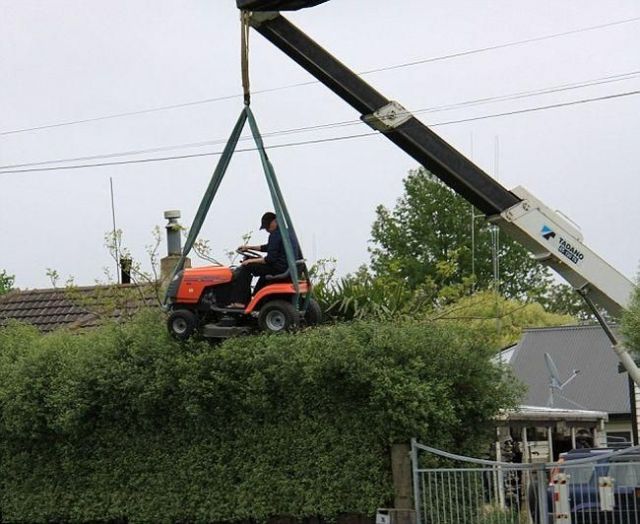 Joe’s Comment – Considering the practical nature of the above photo, this has been a “MacGyver” week for me, too.  Trying to catch up with yard work has spawned a few ingenious solutions.  I can appreciate the above photo for the absolute time saving possibility.  As for health and safety, let’s say I’m glad I don’t own a crane, or have a tall hedge, ’cause this looks like a plausible solution!

Invasion of Normandy (D Day)
On June 5th, 1944, “Operation Overlord” was postponed due to inclement weather.
Early morning June 6th, 1944 Supreme Commander Dwight Eisenhower gave the green light to the largest invading force in known human history, and D Day began.
He had misgivings about the chance of success.
He knew many thousands of men were surely to die in the effort.
There were a few hopeful facts in favor of launching now (or never).
– The invading forces were composed of American, British, and Canadian troops, many of which were experienced and well trained, in large number.
– A clever ruse had been carefully planned and implemented to deceive German intelligence into believing an invasion, if attempted, would happen via Dover – Calais; a decoy.
– There were thousands of reserves, tonnes of materiel and machinery in reserve.
– The Soviet armed forces had depleted the German reserves, materiel, and fighting forces to the extent that the Western Front was suffering shortages.
The five beach-heads the Allies defined for Normandy were, from west to east, Utah, Omaha, Gold, Juno, Sword.  The American forces stormed Utah and Omaha.  British forces Gold, Sword.  The lightweight, punching way over their head, was Canada, taking Juno.
A short overview from PragerU:

On D Day, Jim Radford was a 15 year old galley boy serving on the Empire Larch as a member of the merchant navy.  The beaches of Normandy was his first deep sea deployment.
Years later, visiting the same beaches, he was overcome by memory and emotion.
He has memorialized his experience in song:

Miller and Hanson
Two of our favorite humans have a discussion of current events.
Dennis Miller is a way intelligent comic and humanitarian.
Victor Davis Hanson is a way intelligent historian and pundit.
They have known each other for years.
A fast moving conversation about where and what the United States is in 2019:

Patrick Moore
A short video of Patrick Moore being interviewed by Ezra Levant regarding the latest “scare the children” crazies in the “Global Climate Change” maelstrom.
The hysteria around data-less affirmations of catastrophe is quickly dispelled by Dr. Moore.
Why don’t people understand basic science?:

Ford vs Ferrari
Ford was heavily involved in motorsports during the ’60’s.
Henry Ford II was committed to establishing Ford Motor Company as a leader in competitive motorsports.
Joe and I remember enthusiast magazines following the conflict when Henry Ford II offered to purchase Ferrari and was rebuffed.
What ensued was a maximum effort by the Ford Motor Company to establish the marque as a world class competitor in endurance racing, specifically by usurping Ferrari at Le Mans.
The accomplishments of the company’s efforts during the ’60’s produced the Cobra, the GT 40, Shelby Mustangs, the Ford-Cosworth DFV-F1 engine, the Ford Indy engine, and the 427 side oiler modified for racing, which powered many racing series vehicles, including the Ford GT40 to a 1,2,3 win at Daytona, then at Sebring, and again at Le Mans, all in 1966.  That is a tour de force!
The following trailer is for a soon to be released (2019) movie which (hopefully) will faithfully tell the story of how Ford unseated Ferrari:

Wikipedia has a detailed summary of GT40 development.

Aaron Franklin
Summer is just around the corner.
Our cabal is celebrating 70 years of being.
Wait, “cabal” is incorrect; that is a sub-group.
Perhaps cohort or clique is more fitting.
Or coterie, not so much a cadre.
Joe says make it simple.
A bunch of old friends are getting together to celebrate getting old(er).
Most of us have known one another since elementary school / junior high.
What better way to celebrate good friends than good food, good drink, good stories (albeit veracity challenged), good company?
There is no better way.
As meat eaters, Joe and I have an interest in all things BBQ.
Hence the study of Mr. Aaron Franklin’s BBQ school.
Joe likes the way Mr. Franklin prepares and rubs a beef brisket: preparation makes consistent, delicious product, all things being equal.
Three videos: brisket prep, brisket cook, the payoff:

A few testimonial YoubeTube videos (not produced by Franklin or associates) contend that his is the best Texas BBQ to be had.
Standing in line from 5:00 a.m. to get a seat in his restaurant for supper is a powerful avowal that he is doing something extraordinary…..